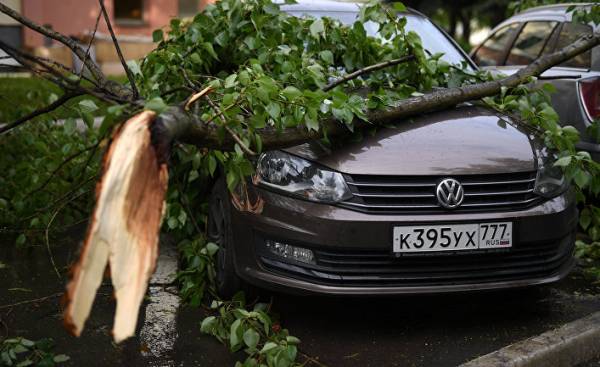 At the moment it is confirmed that the result of a terrible hurricane, subsequent the capital of Russia in the second half of the day on Monday, killing at least 12 people.

More than 100 people were injured.

A gust of wind blew the roof of the office of President Vladimir Putin in the Kremlin.

Storm and hurricane struck in Moscow is unusually strong and cruel blow. Gusts of wind with a speed of 30 meters per second in the blink of an eye changed, some areas in the center of Moscow.

The number of deaths has shocked Russians — the majority of Muscovites did not understand how serious the situation is, till the storm overtook them.

Already started the proceedings, whose purpose is to find out how to do was possible that the storm could lead to such serious consequences.

Even before the hurricane, the authorities raised the danger level to “yellow”, it means the warning that the weather could be “potentially dangerous”, with wind speed of 20 meters per second.

In the second half of the day on Monday, there was nothing that would indicate this.

It was warm and still, most expected that the day will be nice and calm.

But at 16:00 on the horizon suddenly became dark.

A monstrous storm has covered Moscow with its approximately 20 million inhabitants — and it turned out that the hurricane is much more dangerous than most thought.

The storm caught Moscow by surprise

In parks and alleys of the capital Moscow were knocked down hundreds of trees. The streets were whizzing fragments of metal structures and remnants of building structures with numerous buildings in the town. 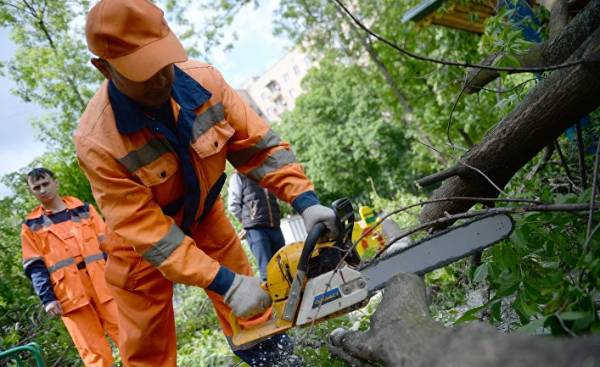 © RIA Novosti, Evgeny Odinokov | go to fotobounce utilities, saw off the branches of fallen trees in one of the courtyards of Moscow

In the area of Ramenskoye fallen tree crushed 11-year-old girl, and in the Krasnogorsk district flying through the air a fragment of the metal structure was the cause of death of men.

62-year-old woman of the street Narimanov died when she went outside to throw out garbage — it fell a big tree.

On the street Kedrova in the South-West of Moscow two people were killed when a powerful gust of wind knocked a large tree.

The storm descended so quickly that in just a few minutes of quiet weather and warm turned into a storm with wind gusts to more than 30 meters per second.

With the Kremlin blew the roof

Video captured by tourists in red square, shows that blown away even from the office of President Vladimir Putin in the Kremlin.

The footage shows how part of the roof on the Senate building where Putin and the office and the apartment, blowing away in the wind. As soon as the storm subsided, the workers immediately began to try to patch the roof.

Today Putin himself flew to Paris to meet with French President.

The last mountain in the Kremlin carried out large and costly repairs.

Multi-million city was not ready for the revelry

Health authorities confirmed on Monday evening that 12 people were killed and 50 injured.

When the city was overwhelmed by the hurricane, many parts of Moscow was a construction site.

More than 80 streets of the city, the mayor started a large-scale repair work.

But due to the bad weather metal construction, a tarp and a wooden structure just flew through the air in some areas of the city getting around was just deadly.

“Most people in Moscow do not understand that we are approaching dangerous hurricane concludes the channel Life.ru. — The city authorities and emergency services, whose task was to prepare us for the hurricane, suffered a complete fiasco”.

“A hurricane arose from the collision of warm atmospheric front with a cold who came from the North,” — said Vilfand.

Although the warning about the hurricane was done in advance, it turned out that it is much more powerful than it was announced.

In Moscow regime was introduced emergency, tens of thousands of people have been thrown on clearing of roads.

The majority of people killed in parks

The hurricane that erupted over Moscow on Monday in the afternoon at 16.00, knocked 3,5 thousand trees.

Most people were killed by falling trees on passers-by walking in numerous parks. And in Gorky Park and in the Park at ENEA reported killed.

Two children are in hospital with life-threatening injuries when the tree fell in a kindergarten.

“The storm caught us at the wrong time,” said Moscow mayor Sergei Sobyanin visited one of the hospitals of the city, where the evening was hospitalized some of the wounded residents.

“All the victims will receive compensation. But casualties no money can not compensate,” — said the mayor.