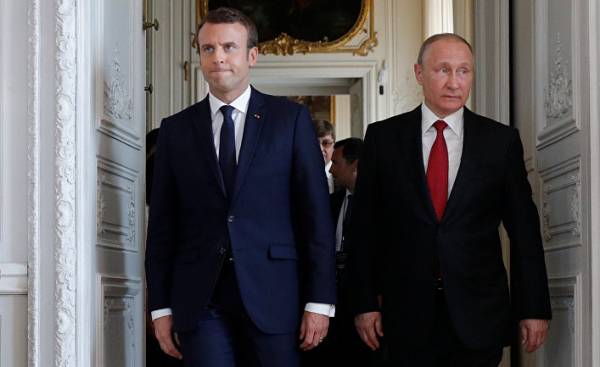 Trying his hand at diplomacy, the President of France Emmanuel macron (Emmanuel Macron) stated that on Monday he had a very “Frank, direct” talks with Russian President Vladimir Putin. However, he called for cooperation in the Syrian issue and in the fight against Islamic state (a terrorist organization banned in Russia — approx. ed.) but also struck with extremely sharp attacks on some Russian media, accusing them of spreading “false propaganda”.

The two leaders went out to reporters after his first meeting of the discussion held in the luxurious Versailles Palace and lasted for an hour and a half longer than planned. They are clearly still disagreed on many issues, but, it seems, has sought not to let their differences determined their budding relationship.

Macron said that he spoke with Putin on LGBT rights community in Chechnya and the rights of non-governmental organizations in Russia exposed to attack, promising that it will “regularly monitor” the situation. Putin stressed the need for closer cooperation between Russia and France — two nuclear powers that are permanent members of the UN Security Council.

Speaking with remarkable candor, macron criticized the Russian state media — Sputnik and RT for the distribution, as he put it, “false information” during the elections in France.

“If someone spreads the slander, then it is not the journalists — the authority of influence. Sputnik and RT was such bodies influence during this presidential campaign, which in some cases has spread lies about me personally and about my campaign headquarters,” said macron.

The macron has become the first of Western leaders, who held talks with Putin after a meeting held over the weekend of the summit “the Big seven”. Relations with Russia were a key topic of the Congress.

His invitation addressed to the leader of Russia, came as a surprise, given that during the elections in France, the macron has taken a tough stance against Russia. Assistants Makron also claimed that Russian organizations carried out a hacking attack on his campaign headquarters.

Moscow categorically denies all charges of meddling in elections in France, where the macron won. On Monday, Putin once again denied the allegations, calling them “unsubstantiated assumptions of the press.”

He also explained his March meeting with the rival of Macron on the presidential race, far-right leader marine Le Pen (Marine Le Pen).

Putin has called Le Pen is a politician who wants to develop friendly relations with Russia, and said that it would be strange to reject her attempts to cooperate.

According to him, the meeting with Le Pen was not attempt to influence the election. Putin added that Russia knew the results of public opinion polls that predicted victory for Makron.

Macron stated that it stands firmly on their positions on other issues.

He said any use of chemical weapons in Syria (where Russia supports the government of President Bashar al-Assad) is France’s “red line” and mill the reason for “immediate response” from Paris.

He did not specify what it can be for the measures. However, in the skies over Syria and Iraq, France has its own aircraft. It strikes on positions “Islamic state”, acting in the international
coalition.

Macron described the meeting as a first step in resetting relations with Russia.

“Great events are not made in one day, he said. — Exchange of views, I think, was a very open, Frank, we’ve said to each other”.

“Of course, we have things on which we disagree, but we have expressed it,” he added.

The first handshake of the leaders after Putin went out of his limousine in Versailles, it was relatively short and sincere. It was not as “macho” as made famous handshake of Him and trump in the style of “who will concede first” held at the first meeting of leaders last week.

Putin said that they Macron agreed to discuss closer cooperation in the fight against terrorism. It was proposed to hold an exchange of experts for work in this direction.

On the Syrian issue, Putin stressed the importance of preserving the Syrian state, adding that without it “it is impossible to deal with the terrorist threat.” Macron, who adheres to the same position, said: “I wish we were able to organize a democratic transition by maintaining the Syrian state.”

“State in a state of collapse are a threat to Western democracies,” he said.

The pretext for Putin’s visit was the exhibition at Versailles devoted to the 300th anniversary of the visit of Peter I to Paris. But thanks to this visit Putin with a Macron has the opportunity to consider all the complex issues on which they disagree, and find common ground.

On Monday in Paris near the Eiffel tower, was held to protest human rights activists, outraged by the situation of gays in the Russian Republic of Chechnya. They were holding a banner reading “Stop homophobia in Chechnya!”.

During the presidential campaign in France, relations between Him and Putin has deteriorated and was far from perfect.

During the race for the presidency macron said on Russia are harsh words, declaring that France and Russia do not share common values. Putin (wrongly) relied on rival Macron — far-right politician marine Le Pen. The Russian President took Le Pen in the Kremlin in March before the Makron easily won over her victory.