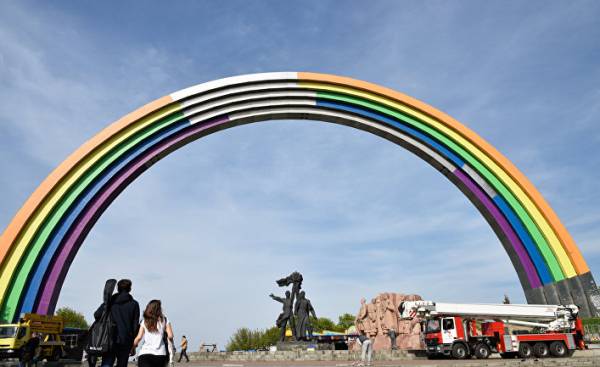 Where the street leads down from the Upper town to Podil, the old quarter of Kiev port up on the edge of the hill (Golden domes of the Dnieper, on the right, the Cave monastery, to the left of the Archangel Michael’s monastery) men waving their arms. Over them bent in the grey and steel tones, the Arch of Ukrainian-Russian friendship. Below them, the descent to the Lower town. Some are dressed in uniforms: here police helmets, there is the old fashion military cap with a cutout in the form of the letter V on its front part, like old stand-up collars. During the Second world war these were caps of Ukrainian partisans in their relentless fight against the Soviet Army, and today, when once again waging war with Russia, it is the cap right-wing nationalists.

This grey arch for a long time already nobody was interested. It’s just one of all these monuments, said people in the Upper town between Gucci and Starbucks, and down to the hem, where Tatar refugees fried on the sidewalks pasties, they say the same thing: it’s just Soviet monumental scrap, forget it. It never did not particularly care. Three years ago when Russia invaded Georgia, just unscrewed the plate, and all was quiet.

And now they’re waving their arms, and the police wore helmets. Who from the Top of the city goes down to the Hem, from the Maidan, where in 2014 a Pro-European revolution in Kiev reached its tragic climax in the Lower city with its graffiti and empty factory halls, one immediately sees why: blue arch no longer gray. Someone colors it. Can be seen working, can be seen fresh paint — the colors of the rainbow. Kiev is preparing on Saturday of next week of the European song contest — Eurovision song contest, whose slogan is “Celebrate diversity”. Therefore, the city authorities sent to the old monument that is no longer needed, working with colorful paints.

Men in guerrilla caps it did not seem quite convinced. This is the color of homosexuals. The old Soviet scrap metal here are painted in gay colors, and now have to believe that all of this is the openness, diversity, joy, and pies? In any case, the “Right sector” (an organization banned in Russia — approx. transl.) mobilized people through Facebook, and now they’re going to resent. “We are not as Europeans, to just swallow it all,” says one, while other shouting threats. Meanwhile, working with paint quickly departed, police closes ranks.

So it was last summer, Kiev is not a new one: the homosexual community organized a gay pride parade, “Right sector” called their fighters from gyms and veterans ‘ associations to disperse the shame of the nation, as in previous years. But in 2016, all went off without a hitch: “the Kiev parade” took place safely, although not without abuse by nationalist thugs. But still a “bloody massacre”, which was threatened right wing, has not happened.

Kiev police protected the homosexuals, lesbians and their friends, although for some of them it was unusual. Even more unusual, in any case, the experience of the community of gays and lesbians: “if We were suddenly in another country”, — said Zorian KIS (Kis Sorian), one of the leading figures of this community. A year earlier, in 2015, he was beaten, when he shook hands with his friend were walking along Khreshchatyk, the luxurious Boulevard of the Upper city.

“Another country” is the right word when talking about Ukraine, which began to develop after the revolution of 2014, and especially when we are talking about Kiev, the capital of the Golden domes above the river, hundreds of thousands of people who in 2014 took to the streets to relieve the oligarchy of the Russian sample of President Viktor Yanukovych. Then hundreds of people bled on the Maidan under fire from both parties, almost ten thousand were killed later in the war, which Moscow responded to this Pro-European uprising. However, on the other hand, the expression “another country” is still not quite sure.

Maybe in 2014 occurred not a new Ukraine, and at least two. On the one hand, this diversity, individuality, art groups and citizen initiatives, on the other hand, the “old values”: family, Fatherland Ukrainian national clothes. On one side there is Ukraine those who have a beating heart, when the old Arch senseless Russian-Ukrainian friendship suddenly turned into a rainbow at the end of April. On the other side — the nationalists with their shaven Cossack hairstyle, it sickening to see against the background sky may these dyes, which mean they do not anything but treason and perversion.

Both streams originate in the Maidan revolution. “European values” such as freedom, rule of law, diversity, played a major role, but there was an undercurrent, in which Russia defended the struggle for “national”, for the values of God, family, marriage, men and women, as before the guerrillas. Both trends fought on the Maidan, hand in hand, while President Yanukovych, a Russian puppet, fled in panic. Today, they are irreconcilably opposed to each other.

Besides, who wants to see it with my own eyes, enough to retire from the police bus near the Arch of friendship and rebellious men. To go through the streets down to the Dnieper. In tsarist times, the Hem was a quarter of artisans and fishermen. On Kontraktova square gathered cattle traders, Jewish small shopkeepers were in their shops, tanners and potters ‘ workshops were located in right on the slope, where the down of the Upper city, overgrown with bushes the valley of the stream. Decades of the Soviet Union, reminiscent of the old factory workshops, some of them still working, as, for example, shipyard named after Lenin, other decline.

Today, no cattle, no more, and the Jewish shopkeepers, after the Wehrmacht and the SS in 1941 almost completely destroyed the Kiev Jews during the worst ever mass shootings at Babi Yar.

The hem speak a mixture of languages — in Russian and in Ukrainian. Before “a’s zhitniy market”, a huge indoor market, from the Soviet concrete immediately over the Kontraktova square, placed with their boxes, money exchange offices, sellers of kebabs from Kyrgyzstan, manufacturers of keys from Armenia. Women warm coat laid out on the pavement its range: here the socks directly from the factory, a dozen potatoes, five glass jars of pickles, there’s a bunch of brooms. One of the posters promises “American clothes.”

This is the Hem that already existed, when 26 years ago the Soviet Union collapsed and Ukraine became independent. Since then, however, appeared new, and it can be found at fishing bridge near the old shipyard named after Lenin. This bridge across the semi-abandoned industrial port, strictly speaking, is not a bridge: it guys are still good, despite the fact that stranded wire has long corroded by rust, but on the opposite end, the shipyard, the roadway dropped. Here for a long time already go. Has its benefits: in the afternoon there are a lot of people. The young men squat on the pavement — beer bottles, there appear to be numerous hairstyles with braids, tattoos, cigarettes-cigarettes, and when the sun goes down, everyone is looking at the hills of the Upper city, where the glittering domes of the monasteries.

Hem in motion. Here and fans of music, they used to gather on the air under Khovansky bridge, and today they are everywhere. There are hot spots, such as old textile factory on Nizhneyurkovskaya the street where is located Closer demonstratively homosexual nightclub, he’s a radio 20FT with the program of the Japanese “new wave” and German electronic music (“Berlin school”, says the DJ). In the theater of Post-Play in the same factory building refugees with the fighting in Eastern Ukraine organized documentary theater, and scribbled graffiti on the garage cooperative on Peter street, between the supermarket and the prison, the air smelling of sulfur: the artistic team included a welder. The spray paint from the garage, club graffiti “etc” and the guys from “665” — they hem you know.

Jack the Molar — one of the activists in the club urbanists DeNeDe: the name means, different interpretations, “God knows where” or “deconstruction, not decommunization”. She says that the anarchist motives of these guys, it’s spray paint, their dancing bananas and cats with five legs is a protest against the interests of the business world, which, of course, in the hem, for example, turns an old apartment of potters and tanners ‘ in free space for expensive housing.

Thus, the Hem — this is “another country”, which says Zorian KIS, activist homosexuals? Maybe. Hem has many faces. In hem, each happy in its own way. This picture fits with another line of Patriotic-traditionalist counter-current, opponents of homosexuals and enemies of feminists, angry korotkometrazhnye men who interrupted the work of painters over the rainbow on the Arch of friendship. How inharmonious all is happening here, says Natalia Nieves of research of visual culture research center (VCRC) located in a spacious compartment with toilets old steel factory on Glubochitskaya street. This organization holds seminars on feminism and post-Soviet urbanism, she organizes exhibitions and if there is no frost, it holds fashion shows in an overgrown ravine right on the slope over the garage cooperative with graffiti.

The center was always a place of enmity between the “two countries” that have arisen on the basis of the revolution. At VCRC constantly attacked, presumably men (and women) like those storms are now painted in the colors of the rainbow arch. Constantly it came to violence. In the fall after independence on the open street was beaten by people in the form of Vasyl Cherepanin, one of the leaders of the VCRC.

Where will this conflict? If you listen Natalia Nieves, in this picture, there are light and shadow. Violence against the hem has led in recent years to the scene in 2014 of the cinema “Zhovten” (in Ukrainian “October”) Konstantinovskaya street, because there under the title “Sunny Bunny” were movies about sexual minorities. On the other hand, says Nieves, despite incidents of attacks since the revolution was rather less than more.

And upstairs, near the Arch of friendship, the situation calmed down. First, the “Right sector” is still threatened: this organization, which, by the way, she calls herself a “nationalist”, will not allow, they say, “homosexual delusions” and “trying to flirt” with Europe. If you really want that stupid arch to decorate, let them use Ukrainian folk motifs. When the police and nationalist activists confronted each other at the end of April at the foot of the monument, for a time it seemed that an ugly conflict will ruin the mood before the Eurovision song contest.

And now this drama, which was so noisy, ambiguous took such a pragmatic turn, which Ukrainian politicians constantly amaze its citizens. In any case, Vitali Klitschko, former world Boxing champion, then a revolutionary leader in the Maidan and in 2014 the mayor of Kiev, was adopted on Thursday a Solomonic decision about the friendship Arch. The colors of the rainbow will remain, at least on the right and left base, that is where the painters had to work before he appeared angry men. And “Right sector” is also something that will get: at the very top, where the steel structure is still not painted, you will see a pattern Ukrainian embroidery.