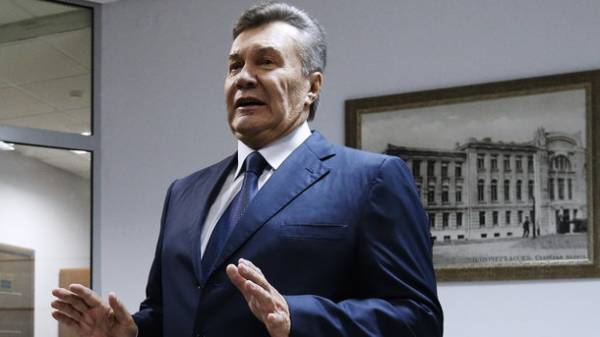 Under the dome can not share seized from the fugitive Viktor Yanukovych and his entourage $1.5 billion In BPP offer to direct them to the needs of the army, infrastructure projects, and replenish reserves and the repayment of debt. In NF say that it would be good to spend the money for salaries to state employees and retirees. And the money that he received to the state Treasury account at $1.5 billion, as stated, and $1.1 billion To come to a common denominator, deputies want to establish a working group which will develop a compromise bill on the sharing of confiscated Yanukovych and money. But as said the first President of independent Ukraine Leonid Kravchuk, if you want to delay action, create working groups. “Today,” found, a sentiment the parliamentary factions and groups, and whether state employees and retirees the promised allowances.

How much is it? About confiscated in favor of the state the money of Viktor Yanukovych and his entourage, the Prosecutor General Yuri Lutsenko said the evening of 28 April. “On the investigation of the Prosecutor’s office of the ATO forces came into legal force the court decision on confiscation into the state Budget of Ukraine about $1.5 billion so-called “common Fund” of Yanukovych and K. Now employees of “Oshchadbank” where the arrested money, and the Treasury carry out the court’s decision. I am sure that the money stolen by Yanukovych’s mafia, should be used so that it is felt by the army and the people of Ukraine”, – wrote in his Facebook Yuri Lutsenko

Money, as explained in the GPU that was in the accounts of hundreds of companies. Returned them via the Kramatorsk city court, as a half years of quarrels and discussions, the Parliament has not adopted the law on special confiscation. The case filed by the military Prosecutor of the forces ATO. The decision of Kramatorsk, the court issued at the end of March. Into force, it entered on April 28, once expired the period of appeal. “These money was invested at the time of Yanukovych through special organized by members of the criminal organization the scheme in government securities, which had enough serious interest for using. After they were arrested, securities passed in the form of money, including annual interest, which was provided for under the treaties. At the moment, is setting the exact amount of how many alive of what remains in the form of securities. But not less than $1.5 billion, roughly equivalent to 40 billion UAH“, – explained Yury Lutsenko.

May 3 at a meeting with Finance Minister Alexander Danyluk and head of the NBU Valeria Gontareva Petro Poroshenko said that on account of the state Treasury received $1.1 billion. Part of the money will go to strengthen foreign exchange reserves (due to the confiscation of increase and foreign exchange reserves to us $18.4 billion) and the funding needs of the defense. Another $200 million will give the Ministry of Finance securities and, in accordance with the law, the same amount will reduce the country’s public debt.

“It’s not just increases the possibilities of the state budget and the Ukrainian state to restore fairness and invest these funds in the Ukrainian army, strengthening the defense capability of our state and the restoration of social justice. This strengthens the financial-banking system, adds to the stability of the national currency”, – said Petro Poroshenko.

According to the Prime Minister Volodymyr Groysman, then, for what purpose will be sent to the confiscated funds will be decided during the consultations in the coalition. “I expressed my position, it coincides with the position of President is that of strengthening the country’s defense. It is also worth to invest in infrastructure projects that support hospitals and schools,” – said Vladimir Groisman.

Parliament can not agree. “Transfer confiscated by the state office of public Prosecutor of a criminal gang $ 1.5 billion completed. If it was in cash in 100 dollar bills – it would be a mass weighing 15 tons. Visual – African elephant with calf. It is now up to government and Parliament. You need to have this year of ordinary Ukrainian citizens felt the result returned from the mafia funds”, – wrote in his Facebook back on April 28, the Prosecutor General Yuri Lutsenko.

In the state budget-2017 proceeds from the special confiscation provided for in the amount of 11.5 billion. The Ministry of Finance reminded that the money goes for defense, support of agricultural producers, socio-economic development of regions and to replenish the regional development Fund. “The excess over $ 11.5 billion is counted, however, can only be used after making changes to the law on the state budget“, – added the Ministry.

That is, if MPs want to exceed the limit at 11.5 billion UAH, they will need to adopt a separate draft law on amendments to the state budget. The BPP propose to prescribe in this document for more spending on defense and infrastructure projects. “The faction of BPP supports the initiative of the President of Ukraine and the Prosecutor General to send the money to strengthen national defense and infrastructure projects. The main thing that money was spent so that it is felt by ordinary citizens. At the same time, we believe, some of that money should also go to children of fallen soldiers, and we are obliged to legislate,” – said the head of the BPP Arthur Gerasimov.

In the PF agrees with the proposal of the Pro-presidential faction only partially, offering to send the money also on social benefits. “The bulk of the money should go to needs of the Ukrainian army, national security, support the rule of law and social projects. NF has developed a draft law No. 5588, which provides that half the money should be spent on improving national security and defense, and the other half on different social benefits: the salaries of teachers, state employees, retirees who receive the minimum pension“, – said the head of the faction of the NF Maxim Bourbaki.

To come to a common denominator in NF propose to establish a working group on elaboration of a common law for the distribution of confiscated Yanukovych and money. Other factions and Deputy groups share the position of the popular front and ready to send their representatives to the working group, if such is created. The BPP say they have not yet discussed the proposal of the coalition partners. The Deputy head of the Pro-presidential faction Oleksiy Goncharenko told “Today” that the government must submit its draft law on the redistribution of the confiscated funds. Some MPs from the NF and BPP in informal conversations with “Today” also do not deny that on this session, such a bill may not embrace. “Rather, such proposals will come out in the fall to give people money (pensioners and employees – Ed.) before the next heating season“, – said the “Today” one of the deputies from the BPP.