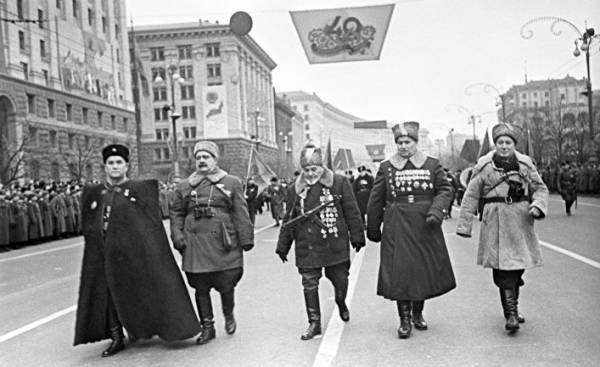 Today, those who again led to our home the war, and those who are willing to defeat us at any cost, celebrate the Victory Day. Scary to realize that in the modern world, the world of open access to information and, as a consequence, the knowledge that there are people willing to call themselves a “nation of winners”, thereby upsetting our contribution to the victory in the Second world war all other Nations.

Strange looks and self-assertion by demonstrating “laughing Iskander” and other deadly weapons at parades, accompanied by mocking, relative to other participants in the world, first and foremost, Ukrainians are “brothers”, which in this day is simply bursting with their own uniqueness.

Each year, it is scary and painful to watch, because the refrain of this paleobase sounds: “Can you repeat that”. Hurt because all those who died during and after that terrible war, and those who because of their age (not necessarily served, and just having experienced all its horrors) remember what it is — war, most wanted and want peace, and not of repetition.

Scary because the current “winners” substitute quiet, wrenching pain and soaked in tears, the joy of these old men who, along with millions of others, survived that hell, and defeated evil, dancing on the bones…

Let us not be like. Let’s not turn this day into a day of victory over memory. Perhaps each of us can find a few family stories about the war. As my grandfather after questions about “fighting the past” withdrew into himself. As the grandmother went to the front as a nurse, and on 9 may was crying about those who are unable to make the field of battle. As the other grandfather never talked about the fighting, but was trying to explain to curious students that war is not a feat…

Yes, they are no longer alive. But their rewards are stored in sturdy cardboard boxes on the mezzanine, and their rare stories in our memory. There are their grandchildren, with interest considering the old yellowed photographs, which look handsome men and women not as it is now customary clothes, with a strange, not by the fashion of hairstyles.

Children love to hear who these people are in the photo, why are they so young, but such a sad, and what they did so we all could live and fight today. Let’s pass on this memory to future generations. And let’s not forget that if, and proud of, their ancestors who gave us life. And war is not a reason for pride, war is pain.