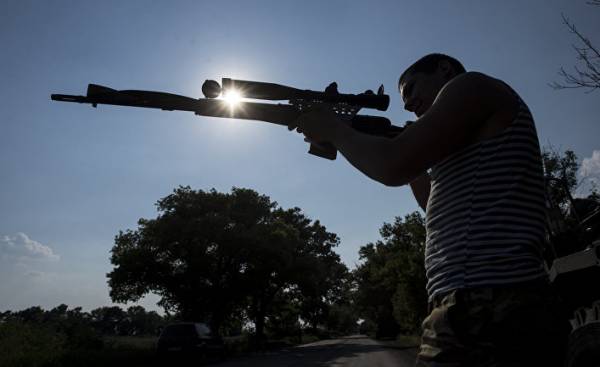 Propaganda myths do not age. They also have a tendency to reproduce itself. Perhaps this is due to the fact that they, as well as lessons learned, transmitted from generation to generation, and then adapt to the new conditions. Such a state of things is the best way illustrates the myth of the so-called “white tights” — the mystical female snipers “from the Baltic States”.

The origins of this myth go back to the First Chechen war. However, today this myth excites the imagination of a certain category of fans propaganda narratives. For example, on 9 April, the website of the Russian newspaper “Komsomolskaya Pravda” reported that the “people’s militia LNR” found a group of snipers that make up the “women of Latvia, Lithuania and Poland”. The snipers allegedly fighting alongside the Ukrainian forces. This is not the first revival of the myth of the “white stockings” in our time.

In the same note, solemnly reported that the previous command is another unrecognized Republic DNR spotted on the enemy positions “women’s division “Right sector” called “Witches”. The fact that representatives of the unrecognized republics seeing things (and often dreaming). In their fevered imagination there the executioners-Bandera, American mercenaries, even a complete stranger.

The emergence of “women-snipers from Latvia, Lithuania and Poland” in this the mythical zoo was only a matter of time. Also pleased to note that the geography of “white tights” has expanded considerably — to the fictional snipers from the propaganda myth for more than twenty years ago joined by new fighting friends from Poland and Western Ukraine. By itself, the narrative about women snipers more than amusing. As mentioned, it was actually the First Chechen war. We can assume that he was indirectly associated with the position of the Baltic States, which sympathized with the desire of Ichkeria independence.

Then, the Russian military folklore and declared female snipers “from the Baltic States”. Their characteristic feature, as you can tell from those narratives, was a painful pull of wearing white tights (except that white color makes the choice for the military environment, to put it mildly, questionable, but myths don’t ask), and, according to one version, the desire to shoot the Russian soldiers in the groin. Why women and why snipers — hard to say. Sex could spot some kind of sexual undertone.

The same snipers were rolled back in late-Soviet propaganda in the infamous statement that during the bloody events in Vilnius in January 1991, “his shot at his”. Thus we can assume that the mythical Lithuanian snipers nationalists for a couple of years that have passed between the final collapse of the Soviet Union and the First Chechen war, replaced the floor and shape of the clothes to be reborn in a new military fantasy. Echo “white stockings” was sounded on the Second Chechen war.

In the same “Komsomolskaya Pravda” for may 4, 2000, it is possible to detect a heartbreaking essay by Sergey Gerasimenko “Krasnov killed the sniper, zastrelilsya his younger brother.” This is, perhaps, the most complete I’ve ever seen the development of the myth of the “white stockings”. It even called out the name allegedly caught and killed snipers — Ulsa Dapkunayte. For Russian readers, perhaps, sounds convincing, but those who are familiar with the Lithuanian and Latvian names (and apparently, that somewhere was aiming the author of the essay) is a laugh.

We can assume that his name is mentioned snipers in the first place may be obliged popular in Russia Lithuanian actress Ingeborga Dapkunaite, well, “Ulsa” in someone’s view, apparently also sounds like something is “Baltic”. There are other evidence that “white tights” was extremely tenacious myth. On the trail you can attack, analyzing and more recent conflicts. For example, the “white tights” re-emerged during the Russian-Georgian conflict in 2008 on the territory of the unrecognized South Ossetia.

This myth again revived in the Russian press. So, in the same “Komsomolskaya Pravda” (and why is that not surprising?), in the article by Andrey Ryabtsev “Chechen battalion rushes to Tbilisi”, which was published in the newspaper August 14, 2008, States that “the Georgians are fighting the blacks, Lithuanians and Ukrainians”. Here is mentioned the “Lithuanian snipers”, which proud Ossetians allegedly caught and shot in the woods, and his body burned. However, it is understood that the journalist or snipers, or even burned her body not seen, and is based solely on the rumors (if not your imagination).

So the return of the “white tights” in the current conflict on the territory of Donbass is not surprising. More surprising would be if the Kremlin’s propaganda did not remember about them now. Too well, this narrative fits in the emerging picture of the world “Ukrainians-Bandera” and “Baltic nationalists”. Moreover, the myth of the “white stockings” is quite deeply rooted in Russian mass consciousness, and has a peculiar piquancy, sexuality and, therefore, attractiveness. “White tights” do not age and continue to hold positions in the fields of propaganda battles.