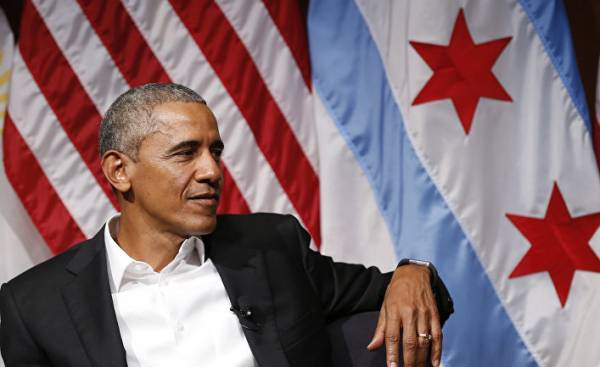 The former President returned to the public with a speech to Chicago students. Almost 100 days after leaving the White house he never spoke about his successor.

After sailing across the southern seas, from the Caribbean to Polynesia on the yacht billionaire friends (the head of Virgin, Richard Branson, Hollywood producer David Geffen) Barack Obama returned on April 24, became over the years almost native Chicago. Less than a week until April 29, when it will be 100 days since the appearance of Donald trump at the White house, former President refrained from discussing current events, as well as remarks that could be construed as criticism of his successor. “So, what happened since I left?”, — he joked.

The meeting was held at the University of Chicago, where he was a lecturer of constitutional law. Everything was in a roundtable with the student audience. Assumed the role of lead Obama had asked the companions (three girls and three young men, two African-American, Hispanic and native American — rare for formal occasions variety) about their aspirations, and then explained: “After leaving I have thought a lot about what’s most important to my new job: to help the new generation to take the baton and try in turn to change the world.”

55-year-old Obama clearly is not going to become the leader of the opposition. Now the position of the democratic party shattered in connection with the “resistance” of the base, and part of the public expresses her extreme disapproval of (67% of Americans think it is “detached from reality”, according to the latest poll by ABC/Washington Post), but the former President has no desire to become the arbiter between centrists and progressives.

He believes that he should devote himself to the struggle with the fundamental problems of American democracy: the arbitrary demarcation of electoral districts, money in politics and the increasing polarization of the media. All these problems do not give US to advance in the settlement of “solvable” issues like combating global warming and immigration.

A humble meeting with Barack Obama in Chicago was the first stage of his return to public life. 7 may, he will receive a reward “Profile of courage” from the Kennedy Foundation in Boston. It will be awarded to him for health care reform, the restoration of diplomatic relations with Cuba and the signing of the Paris climate agreement (all of this is now under threat due to the administration’s plans trump).

May 9, he will perform in Milan for a conference on innovation in the agricultural industry on the use of technology in agriculture. 25 may waiting for him at the Brandenburg gate in Berlin, where he, along with Angela Merkel will participate in the discussions within 500 years of the Protestant reform. Donald trump at that moment will be in Brussels at the NATO summit.

After leaving the White house Obama stayed in Washington to give the younger daughter Sasha to finish high school. In addition, he rents an office near the White house, where two dozen employees sort the incoming mail and hundreds of invitations from around the world. In Chicago, he engaged in the creation of the civil Fund and the presidential library.

Michelle Obama, in turn, will on may 12 in Washington participate in a scheduled Association Partnership for a Healthier America conference against obesity. In addition, both spouses are registered in the Harry Walker Agency which is engaged in organization of paid performances for private audiences, and collaborate with Random House. For their memoir, they received an advance of more than $ 60 million.

At the meeting with the Chicago students Barack Obama behaved calmly as ever, carefully weighed words and perenial historical and sociological reflections harmless jokes. How to avoid passions in social media? “No comment, immediately, to try to understand before you can answer,” said a student. “The same applies to marriage,” ‘ said the former President.

That would suggest a mentor for the youth generation “selfie”? To think “not about who they would like to become” (a politician, a billionaire), because it can only lead to disappointment, and that they “wish to make”: to improve the education system, to fight global warming, to make something that can only benefit even if the efforts are not completely successful.

Satirist Andrew Borowitz (Borowitz Andrew) so summed up the event in The New Yorker: “During a speech in Chicago Barack Obama monster flood is complete and grammatically correct sentences”. What was perceived as “harsh attacks” on his successor, Donald trump.