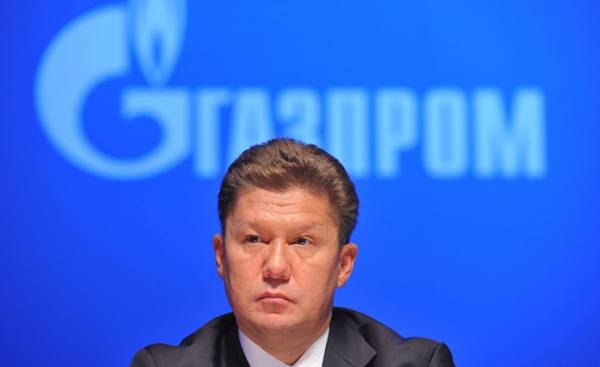 Russia drastically reduces gas transit to Europe via Ukraine after the launch of new gas pipelines from their Arctic fields directly to Germany, by which Moscow hopes to increase its share in the gas market of the European Union, despite competition from Qatar and American gas.

On the eve of the Western partners of Gazprom agreed on a new financing scheme for the project “Nord stream — 2” with a total value of 9.5 billion euros (10,32 billion), which should allow Moscow to implement a plan to increase pipeline deliveries of gas to Europe from 2019.

The share of Gazprom on the gas market in Europe has grown over the last two decades up to third with 25%, and the company believes that it will be able to increase its presence in the EU, despite the concerns of Brussels about the increasing energy dependence on Moscow.

“Currently, we are ahead of record volumes in 2016 at 10%. Apparently, we can expect new records this year, and the share of Gazprom on the European market will grow again,” said Miller, a longtime ally of Russian President Vladimir Putin.

Gazprom has set a record 179 billion cubic meters of gas to Europe in 2016 after the collapse in oil prices, which are linked to the price of gas, boosted by cold weather in the EU.

This year consumers are asking for additional volumes of gas, and Gazprom believes that over the next 15 years will be able to dramatically increase the supply, since Europe will need an additional 100 billion cubic meters of gas on the background of falling of its own production.

“In this regard, it is necessary to understand that the dominant factor is the declining production in the North sea and the European Union…, Respectively, and the share of Russian gas will grow,” said Miller.

Brussels tried several times to get rid of excessive dependence on Russian natural gas after a decade of disputes between Moscow and Kiev on prices, which led to supply disruptions in the cold.

The annexation of Crimea and Moscow’s role in the armed conflict in Eastern Ukraine to convince Europe of the need to reduce dependence on Russian gas supplies which, according to critics of the Kremlin, Moscow often used for threats and blackmail.

“Talking about addiction in principle is not entirely correct. Our dependence is mutual: investing in field development and pipeline construction, Gazprom relies on future demand and actually dependent on the European market no less than the European market depends on supply”.

He also said that Europe has so much invested in the diversification of the import, including the supply of liquefied natural gas tankers that can get gas “from any direction”.

The boom of shale oil and gas production in the US has inspired many European politicians to demand a departure from the dominant role of Moscow in the energy supply, as more LNG from the U.S., Qatar and Africa will be transported to the shores of Europe in the coming years.

Miller said that such competition Gazprom is not worried: “(cheaper) pipeline gas wins the competition with liquefied gas, and it will benefit her in the future.”

Gazprom supplies gas to Europe through three main routes — the pipeline through Ukraine, the pipeline from Yamal to Europe via Belarus and Poland, as well as a new gas pipeline under the Baltic sea — Nord stream — in the small German town of Greifswald.

Gazprom wants to double the capacity of the “North stream” and announced Monday that it has agreed with Uniper, Wintershall, Shell, OMV and Engie on joint financing of the expansion project.

Some countries in Eastern Europe and the Baltic States say that the new pipeline with Russian gas through the Baltic sea will transform Brussels into a hostage of Moscow, and in Northern Europe, especially in Germany, see new pipe economic benefits.

Gazprom discussed the possibility of a complete shutdown of gas supplies to Europe via Ukraine after the launch of “Nord stream — 2” after the expiration in 2020 of an agreement with Ukraine on the transit.

But according to Miller, some supplies through Ukraine remain:

“As for transit through Ukraine after January 2020, we have already stated that it is willing to negotiate… another thing is that speech can go only about lower volumes. Somewhere around 15 billion cubic meters of gas per year, and these volumes are intended for countries that border with Ukraine,” — said Miller.

Moscow’s threats to stop transit through Ukraine was angered by the European Union, which many politicians called the project “Northern stream — 2” economic and political way to punish Kiev.

Miller said that the transit via Ukraine will be reduced for other reasons, including the increased production of Gazprom on the Yamal Peninsula.

“If you look at the picture from space (German) in Greifswald is just a straight line through the Baltic sea from new fields… This route for two thousand kilometers shorter than through Ukraine”, — said Miller.

He also stressed that, in his opinion, Ukraine decades not invested in modernization of pipelines, so the new route will be “environmentally safer”.