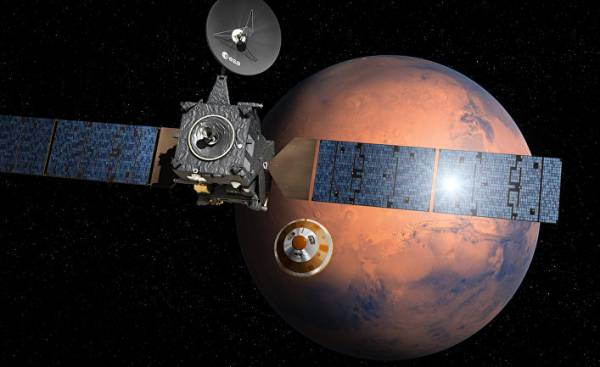 USA, China and other countries develop a program of manned exploration of the Solar system. Against this background, the Japan have stood out with the help of a research probe “Hayabusa”, which brought the particles from the asteroid, and “Hayabusa-2”. The direction of the Japanese research program, whose budget is limited?

“This is a very bold mission,” said the head of the Japanese aerospace exploration Agency (JAXA), Naoki Okumura (Okumura Naoki) during a press conference on 10 April in the National centre for space studies. Mission, abbreviated called MMX, is landing a research probe to the moons of Mars, Phobos (diameter 23 km) or Deimos (12 miles). Position the probe to take soil samples and deliver them to the Earth. According to the plans, the device will be launched to Mars in September 2024 and will return back in September 2029.

There is evidence that Mars had water. Perhaps there are traces of life. On planets that are closer to the Sun, the water evaporates. Those then — freezes. Mars is farther from the Sun, however, it is unclear why there might be water. Participants in this program believe that the heavenly bodies were further from the Sun, collided with Mars, thereby causing water on him. According to them, if you examine the surface composition of satellites can be found clues.

In 2011, Russia has tried to deliver soil samples of Phobos, but this attempt failed. While in 2010 a Japanese research probe “Hayabusa” successfully brought the particles from the asteroid Itokawa, which orbits in an orbit between Earth and Mars.

“Hayabusa-2”, launched in 2014, in 2018 should arrive at the asteroid Ryugu, located between Earth and Mars, and return in 2020. The point is, will it be possible during the mission to use MMX technology program “Hayabusa”.

Where to go the second camera?

In accordance with the Japanese space program in the next ten years to be built three of the research unit of medium size (approximately 30 billion yen) and five vessels of small size (10 — 15 billion yen). This program does not include major equipment. The program MMX for the first unit of medium size, however, the fate of later devices yet to be determined. Research groups compete with each other in the hope to obtain the necessary budget.

One of the candidates for the second unit is the discovery of the Trojan asteroids of Jupiter, planned by the Japanese aerospace exploration Agency for the period after 2025. It is assumed that these asteroids in orbit of Jupiter, preserved substances that existed during the formation of the solar system. Direct studies of ice and rocks on the surface of asteroids will help to unravel the mystery of why the planets of the Solar system lined up in that order.

A distinctive feature is the use of own technology of the solar sail, which activates the ion engine using solar panels. The path to the Trojan asteroids of Jupiter is more than ten years, so a thin layer of rubber glued solar panels, which resemble the sail of a yacht (40 square meters) and replace the fuel.

Researcher Osamu Mori (Osamu Mori) said: “NASA is also planning to explore the Trojan asteroids of Jupiter, but the device should just pass next to them. We want to develop technology to “Hayabusa”, which conducted a precise analysis of particles of an asteroid”.

However, competitors very much. Involved organizations like the space research Institute of JAXA, University of Tokyo, and so on. There are such programs as the Lite Bird (the search for traces of primitive gravitational waves, which existed before the big Bang) and Spica (an orbiting space Observatory with infrared radiation the next generation). The Japanese government plans to make a choice in two years, therefore, most likely, the degree of competition will increase.

Study of the surface of the moon next year

In December it is planned to launch the Indian rocket that will deliver to the moon Japanese moon Rover “Hakuto”. It needs to prionitis in January next year. “Hakuto” will be held on the lunar surface more than 500 metres and send to Earth pictures and videos.

Space probe Slim Japanese aerospace exploration Agency also needs to go to the moon in 2019. In addition, there is a team that seeks to find evidence of life on Saturn’s moon Enceladus, however, a detailed program is not yet available.

There are a large number of research programs of the Solar system, which should replace the “Hayabusa”, however, with limited budget it will be difficult to demonstrate the scientific achievements of the highest quality.