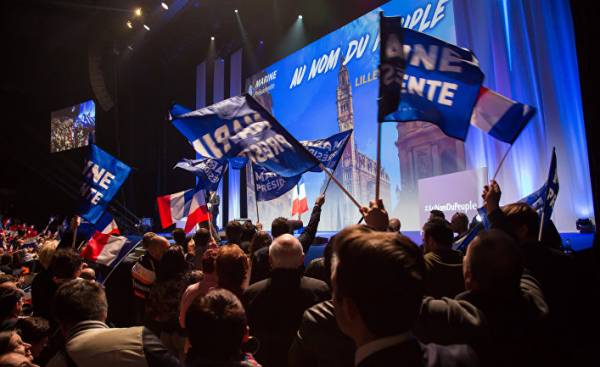 Here is one voter who is going to vote for the extreme right. He is waiting for the bus near no longer a working fountain. He’s 18 years old, he wears piercings on eyebrow, baseball cap color “khaki” and a big tattoo on his forearm. He didn’t want to give his name, so we’ll call him Julien.

“Marine Le Pen is the only person who can change something,” says Julien. — There’s too much unemployment and too many migrants.” On the question of whether unemployment in some way with migrants, he replied: “No, not connected”. Personally, he migrants not too annoying. “But they get too much help from the state.”

Julien expresses what I feel many members of his generation. According to one survey, almost every third young Frenchman won the right to vote and have already decided for whom to vote, it will support marine Le Pen.

It is highly likely that Le Pen got into the second round, scheduled for may 7. The victory of the National front, provoking tensions between native French and immigrants and threatening France’s withdrawal from the EU, and significant arms of the security forces, it seems quite possible.

In the North-East of France, in cities like Aania in Lorraine the party of Le Pen can count on especially a lot of votes. So, in this town of 16-thousand population mayor belongs to the extreme right, starting in 2014. And regional elections of 2015 in the Department of Moselle, (also located in Lorraine) the “national front” received more than a third of all votes.

After the steel mills in Lorraine in the mass, were closed, the economic situation in the region deteriorated sharply. The company Arcelor Mittal, formerly one of the main employers in 2013 closed the last blast furnace. Since the 1970s, years of work lost tens of thousands of people. In Hayange right next to the town hall also stands the old closed factory.

Those who do not want every day to go to located a few hours away in Luxembourg (it has to be done every third employable resident of the city) and has at least secondary education, it has become difficult to find a job.

Consequently, youth unemployment in Lorraine is rather high: almost 12% of the population aged 15-24 years do not have a permanent job. If they rank as well as young people involved in unpaid practice or working a few hours per week, this figure will increase significantly.

As reported the press Secretary of the mayor Ayanga Jonathan champion (Jonathan Champion), in the city with nothing to do, at least, every fifth young person. The city authorities have long been left, then they replaced the right, but to change the situation failed. Now attempt to take the extreme right, while making a bet in the first place, to control.

Champion, dressed in a robe in the colors of the French flag, standing at his office window and points at the hill on top of which stands a statue of the virgin Mary. “We have upgraded all the cameras, he says. — To the left of the statue hanging one of them having the ability to record events in high quality 360 degrees”.

Local police patrol the area on weekends and late at night. In addition, more recently, they have a service dog-shepherd. The mayor would also like to Aange reappeared separation of the national police with expanded powers. A couple of years ago, it was closed.

In Aange the crime situation is not worse than in other small towns, according to champion. “But now people feel more secure”. The biggest problems, he said, was burglary, and about five or six dozen Albanians, who lived in the hotel opposite city hall.

Migrants were defined by the person “proletarian” Aania for many decades. To work at the metallurgical enterprises came Italians, poles, Spaniards, and then also Algerians, Turks, Tunisians. So the front national is not acting here in Hayange, against migrants as such.

It is only to prevent the influx of new immigrants. Those who live here a long time, already gained access to the French culture, asserts champion. The problem, he said, is the influx of refugees in the last two years. So, we arrived in the city about 200 Albanians and Africans. “They don’t understand a word in French and the part behave aggressively” — he stressed.

There are problems also with the youth, recognizes champion. Often young people are pushed, according to the center of the city, “and residents do not like it”. So now we are rebuilding an old hookah pipe in the youth club. Its opening is planned for June.

In addition, city authorities plan to promote cash prizes all young people completing secondary education. These rewards will range from 20 to 50 Euro, but not cash, and coupons for some restaurants or stores. “Thereby we also support the local economy,” says champion.

To Finance social institutions, whose task is to solve the problems of local youth, the extreme right don’t want. “Their services were very expensive, and while they didn’t do anything useful,” says champion.

What about this youth policy, thinks the very young? In the neighboring city of Thionville (Thionville), five young people just visited the so-called “orientation week” in the framework of the Mission Locale, which aims to help young work forces in integrating into the labour market.

One of their problems is lethargy. So the choices for them will be held. As young voters, they promptly forgot — until last December — to register in the voter lists. “I missed the deadline, and no I wasn’t reminded,” says Clementine. The other four shrug their shoulders.

In the diner two streets further works 20-year-old Serhat. His family owns several similar institutions. Serhat is very interested in politics and would, by his own admission, to vote for the left candidate Melenchon.

However, he cannot do it, because also not included in the voter list. “I have to work, and the city hall closes early,” he explains. In France, according to the Institute for political research Cevipof, of the three million young voters, only half will be able to take part in the elections.

Regis Wagner (Wagner Regis) is familiar with the neighborhoods in Thionville, one of which lives and Serhat. He had ten years is a social worker in the so-called “problem areas.” “From the local youth almost nobody goes to the polls, he says. — They could help prevent the victory of the National front”.

But the youth do not believe that politicians can change their lives. “Them that’s not interested. But if you win far-right in these areas can start riots”.

In Aanie evening. Two police officers with a service dog named lucky (Lucky) doing the rounds. Lucky wearing a leather muzzle. As explained by one of the guards, if the dog is attacking one of the bullies, that’s going to hurt, even to bite him she can’t.

Suddenly, lucky began to bark. “You were too noisy,” says the COP to the three girls sitting on the steps of the local Church.

18-year-old Julien had already left on their bus. His tattoo is depicted the spider web with the initials of his family members. “It’s about power,” he said of the “National front”. His name is in the voter lists.