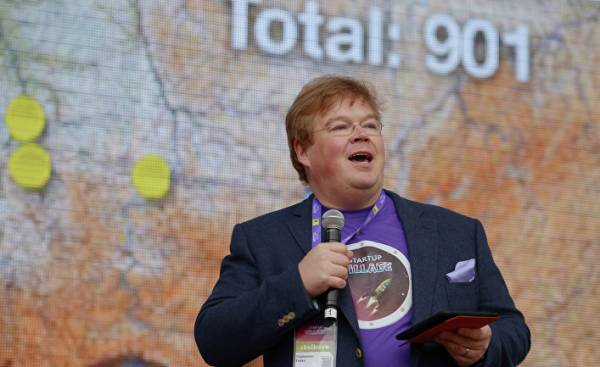 When the new home of 44-year-old businessman of Pekka Viljakainen (Pekka Viljakainen) suddenly appears in the middle of the forest in the Finnish province of Savo, is breathtaking: the house is reminiscent of a Russian dacha straight out of the nineteenth century.

“Welcome to the center of the universe,” says Viljakainen.

Wonderful building in the Joroinen — not only the house, but his main office, from which you can easily call the Kremlin.

“A person in fact need to be from somewhere originally. I come here, this here country boy,” says Viljakainen.

Farm boy or not, the question is one of those Finns who have penetrated into the heart of the Russian economy.

His official title is adviser to the Prime Minister Dmitry Medvedev on innovation. In addition, he is a member of the Board of “Mail of Russia” and Fund Skolkovo Ventures. SKOLKOVO is called the silicon valley of Russia.

Viljakainen four days a week working in Russia and travels across the country as a preacher of information technology.

His office confirms its success from its Eastern neighbor. The wall is decorated with the emblem of Russia, which the audience received the gift of the anniversary. On the bookshelf — the Order of Friendship, which the entrepreneur has received from Vladimir Putin last summer.

Tank video link on the lower floor is reminiscent of the plot of the films about James bond (James Bond).

“From here I can call the Kremlin or the Federal Assembly of the Russian Federation. You can call in 14 different countries.”

Viljakainen makes video calls on the background of the emblems of the “SKOLKOVO” or “Mail of Russia”.

“The British media was interviewing me on the subject of “Mail of Russia”. They thought I was sitting behind a Desk in Moscow. I can sit at home and even in your underwear”.

A century ancestral estate in Joroinen was originally Torpey (Thorp — land, which the Finnish peasant (torpor) was rented from the landowner — approx. TRANS.) with an area of 16 acres, to which his father had bought “several hundred acres”.

On land appeared an Orthodox Church, a refectory, a helipad, a smoke sauna and a solar power plant. When viewed from above, all blocks form an Orthodox cross.

Money went a lot, but the exact amount Viljakainen doesn’t know. There is no need. Means he has enough.

“Money gives freedom and opportunity to fulfill their dreams,” he says.

Viljakainen became rich even before he opened the door of the Kremlin.

He made a fortune at age 26 in 1998. Then he sold he founded as a teenager of a computer firm Visual Systems company Tieto and immediately earned more than € 70 million.

“My success was facilitated by the Internet. I did in the 1990s for the Finance group Osuuspankkiryhmä the first Internet Bank in the world.”

Income from the sale, he received shares. Viljakainen is still the largest holder of shares of the company Tieto. In addition, he has worked for the company for 10 years.

“I sold about 100 thousand shares Tieto. However, the house I built for a salary.”

For a vacant village home project with an area of 500 square meters was a big success. Only for it’s construction took one hundred people. The temple was built 500 days.

Initially, the temple was a gift for my 40th birthday for wife, Russian pianist Anastasia Inosine. Later it was decided to open the temple to all.

Inyushin came to Finland after the collapse of the Soviet Union and studied at the Sibelius Academy. The marriage was contracted in the early 2000s.

Hand spouse noticeable in the decoration of the house. The couple traveled to auctions across Europe. All doors and handmade furniture — antique.

“Old furniture can now be bought on the cheap. She’s not in fashion,” says Viljakainen.

Of Finnish in the house only one Elevator company Kone.

“I told my wife that I’m fat now, and it is unlikely she can carry me from the bedroom down if in old age I myself will not be able to do that.”

The story of the Audience, which got to the heart of the Russian economy, not saying it in Russian, amazing.

“I got on the remaining space in the delegation of Finnish businessmen led by the Minister for foreign trade Paavo Vayrynen (Paavo Väyrynen). We participated in St. Petersburg international economic forum. In my speech, I said that I don’t agree with then President Medvedev.”

In the evening Pekka Viljakainen got a call from the Kremlin. The rest is history.

Viljakainen has an island on lake Saimaa, cottage in pyhä village and house in the municipality of sipoo in the so-called “quarter gold teeth”, next to the Prime Minister of Finland, Juha Sipilä (Juha Sipilä) and Deputy Harry Harkimo (Harry Harkimo).

“I live in sipoo because in Joroinen no longer has a functioning airport.”

Viljakainen gives the impression of a good-natured guy from the province of Savo, who loves to chat. However, from the topic of entrepreneurship, he’s not leaving.

According to his calculations, he has been working for 32 years and employs tens of thousands of people.

“I never complicated, always explained to their employees in plain language what to do. I pay my taxes to Finland, never worked in a slipshod manner, do not drink”, — he enumerates the reasons for his success.

“I think it’s a little strange. I’m not a typical guy. I always did it my way.”

Of the house of Viljakainen lot of rumors. The Audience even got labeled “Troll”.

“I wrote that I build a Villa of Putin, and when I started to blow up the rock, there is talk that in the garage I’ll make a bunker to launch the missiles. The house photographed from the helicopter and from alder, a delusion of some kind. What bothered me was that nobody even tried to ask me what’s really going on”.

The garage is placed Playground for floorball (hockey with a ball in the hall) and even a helicopter.

“Helicopter is my passion. I have 12 years and a right to control of the helicopter. My grandfather flew during the Second world war on the “Messerschmitt” and always talked about aviation,” says Viljakainen.

The house uses the earth’s heat and solar energy. Behind the sunroof is a large computer.

“Every day someone in Finland wants me to help in trade with Russia. I say that to talk about, if people first went to Russia. SKOLKOVO is a place where you can quickly understand where the country is moving and what is this new generation”.

In SKOLKOVO yet a new Apple, but the company is promising. The firms have already has 22 thousand employees.

Viljakainen is also Chairman of the Board of the Fund “SKOLKOVO”. The base capital of the Fund is $ 120 million.

“He’s well educated, knows what’s going on in the world, constantly ready to learn something new. This is an important trait for the modern leader,” — said Viljakainen.

They meet every two weeks. To call Medvedev Viljakainen can “almost anytime”.

As the mediator acts as the Deputy Chairman of the government of the Russian Federation Arkady Dvorkovich, which the audience texting in Whatsapp.

Viljakainen several times a year, is found at various events with Putin.

It has friend the oligarch, the billionaire Viktor Vekselberg, a “nice guy” as described by Viljakainen.

Vekselberg he is working in the field of industrial automation and he is also involved in financing “SKOLKOVO”.

In Joroinen say that in the country of Viljakainen visiting dignitaries from Russia, but the entrepreneur won’t name names.

He once organized a football match between politicians of Russia and Finland. From Russia came the Ministers, and in the Finnish team played European commissioners Olli Rehn (Olli Rehn) and Jari Litmanen (Jari Litmanen).

The decision of the Audience to engage in trade with Russia is associated with a heart attack, which he received at the age of 37 years.

“I was in the ICU. There I was thinking whether to go to me to do business in USA or in Russia. Decided that it is necessary to Russia, it’s closer”.

Big task of the Audience — the modernization of the postal service in Russia. When he took this job three years ago, firms were 42 thousand, and officials — 350 thousand.

“Now for the first time in 17 years, the mail began to bring to arrive. Changes have occurred due to refusal of corruption and the introduction of new technologies. Fired 50 thousand employees, hired 30 thousand new. From offices fired a thousand people”.

In many post offices, you can still buy milk and sausage. “In sparsely populated regions mail — the only place where there is a refrigerator.”

In addition, also introduces the “Mail Bank”, whose reign is now Viljakainen.

Viljakainen invests in Finnish and Russian companies, “which is the goal and that move the world forward”.

For this investment entrepreneur’s Finnish inspired Christmas gift to the Prime Minister.

“I promised to give Medvedev a Christmas fish because I smoked. I bought the fish from a local company. Her owner asked me if I thought that the business of fish processing has a great future. I replied that thought, because I had to hurry terribly to bloat the fish and catch a plane”.

“A year from the city of Varkaus will be supplied a million kilograms of clean fish per year. My goal is to deliver the fish to the shops for seven hours, because now is the fresh fish, fished 3.5 days ago.”

He reflects on the facility for the breeding of fish in Saint Petersburg. In this case, it will need to invest one hundred million.

Viljakainen also invests into robotics, solar energy and even game development in Kaliningrad.

“We do business where there are specialists. There is one very good University, where he studied computer technology. No more sympathy towards Kaliningrad I have”.

Your way Viljakainen found in the library of Joroinen, when he was 13 years old.

“School teacher told us that everyone should have some passion. I went to the library. There were books about gardening, philately and a guide to the Tandy computer. I took it”.

After a couple of years he has taught local entrepreneurs to use a mouse and bought a Volvo Amazon.

“I hired the son of the shop owner, he took me, because then I still was not right.”

Training in Technical school Lappeenranta Viljakainen left in the middle.

“I quit school because my teachers were my former classmates”.

The bypass phase is completed in a wooden temple. Viljakainen took Christianity three years ago.

“This is the road leading to the temple, someday you’ll get lucky and my coffin,” he says.