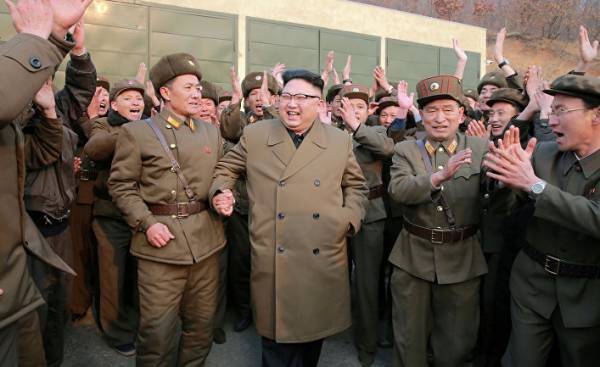 These days, the situation in northeast Asia evolves in the following way:

On the streets of Pyongyang is a festive atmosphere in the parade in the North Korean capital was represented by different weapons. Satellites to the DPRK, waiting another nuclear test. The international media is awash with speculation about the upcoming sixth nuclear test. On the morning of 16 April the DPRK launched missiles, but the military of the Republic of Korea and the Pacific command of the US Armed forces confirmed the failure of the attempt of a ballistic missile of the DPRK.

South of the 38th parallel, thousands of American and South Korean troops conduct large-scale joint military exercises. At the same time, the United States has launched more than 50 Tomahawk missiles at targets in Syria, and for the first time dropped to the positions of the “Islamic state” (banned in Russia organization — approx. ed.) in Afghanistan the most powerful non-nuclear bombs, which is called the “mother of all bombs”. All of these actions are considered as a warning and intimidation of the DPRK. Against this background, the American aircraft carrier suddenly changed direction, taking a course on the Korean Peninsula, the US President Donald trump called the aircraft carrier “invincible Armada”. According to the American side, with regard to the nuclear issue on the Korean Peninsula, all options known, does not exclude the use of military force.

Regarding the demonstration of American military power, the DPRK stated that in the case of the reckless steps the United States, Pyongyang would retaliate.

In the statements and actions of North Korea, the U.S. and the Republic of Korea felt the extreme tension, the parties do not want to concede each other. It seems that the process of solving the nuclear issue on the Korean Peninsula have stalled: Pyongyang requires, first and foremost stop the joint military actions of the United States and the Republic of Korea, changes hostile to the DPRK policy, will be the opportunity to discuss the nuclear issue of the Peninsula. Washington and Seoul demand that the DPRK abandon nuclear weapons, it is a condition to discuss improving bilateral relations.

The development of the nuclear program of the DPRK hopes for security, and to increase the advantage in the confrontation with the United States and the Republic of Korea. However, the situation changes to the section of the plans: the more powerful becomes the nuclear program of the DPRK, the more rigid the sanctions adopted against North Korea. Moreover, the nuclear activities of Pyongyang creates motives for the United States and South Korea in providing even more military pressure on the DPRK.

If you conduct a survey of public opinion in the United States and the Republic of Korea on the use of military force against the DPRK with the goal of eliminating nuclear dangers, it’s likely that many will Express their support. However, if you formulate the same question from a different angle, denoting the use of military force, risking the lives of several tens and hundreds of thousands of people, many remembering Afghanistan, Iraq, Syria and Libya, most likely, will not be hasty to answer this question. The DPRK clearly understands this and knows that the country is much weaker than the United States and the Republic of Korea, but she is ready to fight to the death to all sides suffered damage, thus, Pyongyang creates a sense of fear in Washington and Seoul.

The confrontation between North and South on the Korean Peninsula is a problem left over from the cold war. The source of the nuclear problem in the region is deep strategic mistrust between the DPRK and the United States. Washington and Seoul blamed North Korea for the lack of sincerity to give up nuclear weapons, as Pyongyang believes that the United States and the Republic of Korea aims at regime change in the country. A mutual demonstration of power comes from security considerations, have a rationale, so neither side wants to concede on the issue of dialogue and negotiation.

The preservation of peace and stability in northeast Asia serves the interests of all parties. Military action will not help resolve existing problems, dialogue is the only way. As the Minister of foreign Affairs of China Wang Yi, “the problem on the Korean Peninsula the winner is the one who makes tougher statements or shows the greater fist. In the event of military action there can be no winners”.

Although the current situation on the Korean Peninsula has not yet reached the state of war, tensions in the region is still there. Against this background, any a misfire, misunderstanding or a wrong decision can cause a situation that will be irreversible. In this situation, dialogue is the only way out.