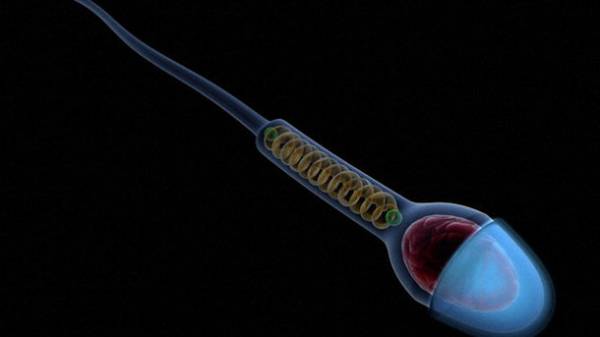 Researchers from the Institute for Integrative Nanoscience and Technology University in Germany have learned to control the sperm and using them to deliver drugs to the cells of cancer. Preliminary publication can be seen at arXiv.org – N+1.

Using two-photon 3D nanolithography, scientists have created special constructs — “tetrapods” which are covered with a thin layer of iron and titanium empty truncated cones with four arms. Optimal geometry of them were selected by computer simulation. Such constructs are mixed with sperm, resulting in the head of spermatozoa fixed with arms inside the cones. The movement of the sperm obtained two times slower than normal, but it can be controlled by external magnet. To achieve tumor arm from mechanical collisions produce sperm cells, their membranes fuse with the tumor cells, and the drug gets inside tumors. 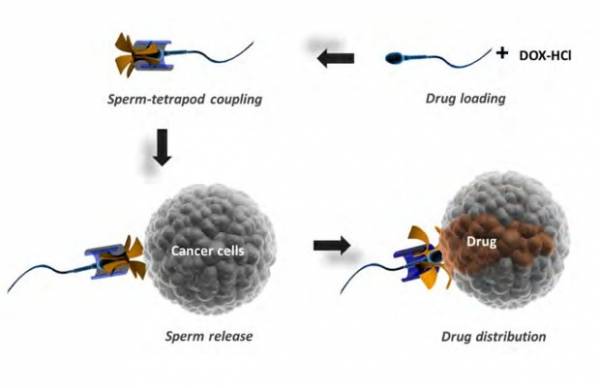 Scheme of the experiment: treatment of sperm with doxorubicin, the conclusion in tetrapods and shipping drugs to the tumor

Scientists have been working with bull sperm, as they are similar to the human form. For additional activation of cells in medium was added to the hormone progesterone. In one experiment, sperm were treated with doxorubicin, a common chemotherapeutic, efficiently and in large numbers penetrated into their heads, and then mixed with “tetrapods”.

The obtained constructs were tested on an artificial tumor cultures of human HeLa cells. In a day such spermatozoa killed about half of culture, and in General showed greater delivery efficiency compared to a simple treatment with medication. In another experiment, the tool was used FITC-BSA (it does not lead to apoptosis, but glows) to look at the distribution of drugs in tumors, and confirmed the effective introduction of agent inside the tumor tissue. Apparently, it is provided by the motility of the sperm and their ability to break down hyaluronic acid in the extracellular structures.

The use of sperm cells for drug delivery will avoid toxic effects, which is typical of other similar methods. Sperm are not recognized by the body as pathogens and are not able themselves to reproduce, as often happens with bacteria. Furthermore, they are quite stable, capable of delivering to the tumor a significantly larger amount of substance in comparison with microcapsules and other nanoparticles, and long to live in someone else’s organise. In the future, scientists hope that they can be used for the treatment of not only oncological diseases of the reproductive system, but also other diseases, such as inflammatory processes in the pelvis or endometriosis.

Sperm are the smallest cells in the human body; unlike most others, they are able to actively and independently move in space. The sperm consists of head, middle part and tail. The movement of the sperm occurs due to the operation of clusters of mitochondria (mitochondrion), located in the middle part and supplying energy for movement of tail. The tail has a cytoskeleton, microtubules are represented. In the host organism, the sperm is almost not moving, but hitting another body, they are beginning to rotate around its own axis and to move forward. The speed of the sperm can reach thirty inches in an hour, but it slows down over time. For fertilization sperm must pass about twenty inches, and this occurs, on average, 1-2 hours after ejaculation. 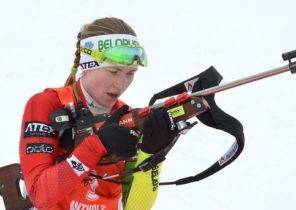