During the working visit to Kharkov President of Ukraine Petro Poroshenko with the President of the Republic of Lithuania Dalia grybauskaitė talked to soldiers – participants of military operations in the Donbass, who was undergoing treatment and rehabilitation in Lithuania.

Poroshenko said that today, June 9, during talks with Grybauskaite, an agreement was reached for treatment in Lithuania an additional 50 Ukrainian soldiers – participants of military operations in the Donbass.

“An additional 50 Ukrainian soldiers Madam President invited to Lithuania, where they will receive high-quality and modern care”, – said Poroshenko.

The Ukrainian head of state thanked the Lithuanian President for her country and people provided very important support to Ukraine in difficult for Ukraine time.

“I am very pleased to welcome the President of Lithuania to Kharkov in order to thank you for the great help that Lithuania has the Ukraine in these difficult times. From the first moment of the Russian aggression which has been unleashed against Ukraine, illegal annexation of Crimea, we felt the support of our partners and friends from Lithuania. I believe that this assistance has been not just a huge difference when we supplied ammunition, guns, clothing, medicines, but was of great symbolic importance,” Poroshenko emphasized. 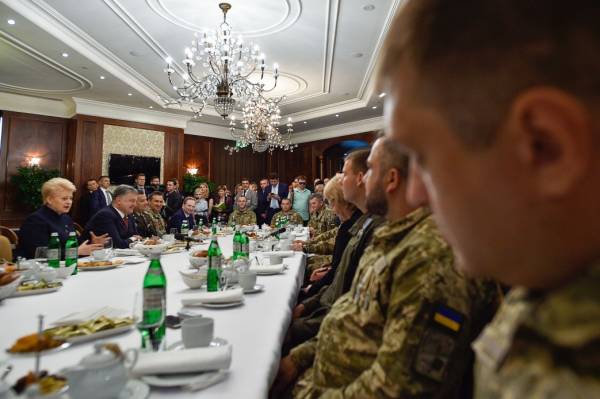 According to Poroshenko, Grybauskaite was the first who called and offered help in the treatment and rehabilitation of Ukrainian soldiers. “We appreciate it”, – he stressed.

The President also thanked Ukrainian soldiers for their heroic deed in defense of his native land. “The heroic Ukrainian troops liberated two-thirds of Donbas, liberated Slavyansk, Kramatorsk, Severodonetsk and Lysychansk, Mariupol and many other places,” said the President.

“I am confident that Lithuania is one of our most trusted attorneys, advocates and reliable representatives in the European Union”, – he said. The President added that it was thanks to the personal efforts of Dalia Grybauskaite of Lithuania, and Ukrainian voice heard in the EU and made decisions in favor of Ukraine. The President of the Republic of Lithuania congratulated the Ukrainian military and said that they are an example not only for Ukrainians.

“Your heroism was an example to us and we wanted not only to help but also to learn from you,” she said.

“You are fighting not only for yourself or your freedom you are fighting for freedom across Europe, therefore helping you is the duty for our people,” – said Dalia Grybauskaite.

“Help from people far more important than the help of politicians,” she said.

The Lithuanian President also assured that her country is ready to further the treatment and rehabilitation of Ukrainian servicemen.

Ukrainian military expressed gratitude to the Lithuanian people, President, the Lithuanian government and Lithuanian doctors who took responsibility for their health and life. Ukrainians gave Dalia Grybauskaite Lithuania flag made by participants of military operations in the Donbass.

As you know, starting from July 2014 until June 2017 Lithuania provided assistance in the rehabilitation and treatment of 155 servicemen of Ukraine who were wounded during the fighting in the zone of the military operation in the Donbass.