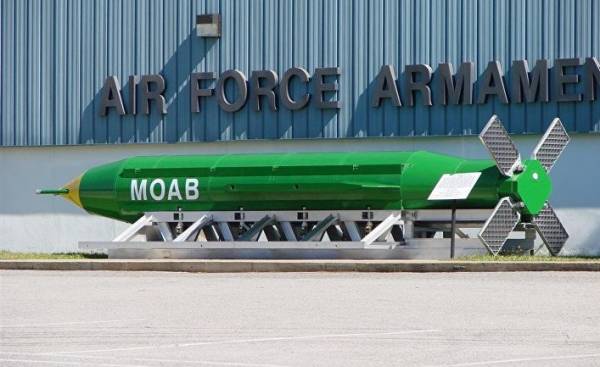 When the United States on Thursday dropped an 11-ton bomb in the underground tunnels ISIS (organization banned in Russia — approx. ed.) in Nangarhar province, the shock wave from it penetrated to the farthest nooks and crannies of this mountainous complex on the mile. The bomb GBU-43, also known by the acronym MOAB (Massive Ordnance Air Blast — heavy munition explosive action), which is sometimes decipher as “Mother of all bombs” (Mother of All Bombs), this is the biggest non-nuclear bomb in the U.S. Arsenal. So far this “mother of all bombs” is not used outside the polygon.

Us Central command confirmed on Thursday that the US air force dropped a bomb MOAB on the cave where, according to him, is inhabited by a local group ISIL “Khorasan province”. “Since the loss of ISIS and the “Khorasan” are increasing, they are to strengthen their defense using improvised explosive devices, bunkers and tunnels. This is the ordnance that allows us to overcome their defenses,” said the commander of us forces in Afghanistan General John Nicholson (John W Nicholson).

The bomb GBU-43 MOAB is used for the first time, although it was created around 2002. So why is the United States 15 years dumped her? It is not in size. The fact that MOAB is particularly destructive properties, and the us military has to date not been suitable for her purpose.

In 2002, of air force Research laboratory designed the MOAB for possible use in the Iraq war. According to a senior adviser at the Center for strategic and international studies (Center for Strategic and International Studies) Mark Canciani (Mark Cancian), after that, the air force has placed on the factory ammunition for the army in Oklahoma order to manufacture a dozen of these bombs. The party was small not because of the exorbitant cost of the bomb (she’s worth millions, but it’s because of the size, not because of the complexity), but because the bomb itself has a very narrow application. A year later, the military tested the “mother of all bombs” on the ground in Florida.

“MOAB is not a very difficult munition, says Cancian. — Actually, it’s just a big canister with a huge amount of explosives inside.” The uniqueness of MOAB is in a weight ratio of explosives and other materials. Except for the case, its all almost completely is the explosive H-6. It is a very stable compound, making the bomb can be safely stored in the warehouse without fear that she will accidentally explode and destroy everything around.

To understand what is the feature of the bomb, should take a look at her insides. It’s not a nuclear weapon, but it’s not a bomb-volume action and not the concrete-piercing bomb which penetrates deep into the ground. The main factor affecting ammunition undermine above ground, is a powerful shock wave. Most of the other non-nuclear bombs, say, precision-guided aerial bombs of the direct impact that the United States regularly dropping in Syria, Iraq and Afghanistan, less the percentage of explosives and more shell, forming thousands of pieces of shrapnel to kill people. The principle of MOAB is very different.

How it works? The bomb creates a massive explosion and a shock wave that penetrates into the depth and causes of the defeat, where it cannot do other bombs. MOAB is also different from his Russian relatives, which is called the “father of all bombs”. The more munition GBU-43 is a vacuum. That is, it uses a gas to create a huge fireball.

“MOAB is only the shock wave,” says Cancian. But this is a very powerful Shockwave, destroying everything at a distance of 150 meters.

To create a blast wave requires a massive bomb. MOAB weighs more than 11 tons, and so it has to deliver a cargo plane and drop right over the target, although it does have a guidance system GPS, as in precision-guided aerial munitions straight defeat. It dropped from aircraft using a parachute, and undermining occurs moments before the collision with the ground. She has a rather odd tail in the back, which helps to hit the target, and also slows down the bomb during the fall. This is done so that the crew could divert the car away from the crash site of the munition.

“If a bomb explodes too soon, it will destroy the plane too,” says Cancian.

Why wait so long

MOAB long ago entered service with the us army. Once even said that it can help to stop the oil spill in the Gulf of Mexico. But the fact that its almost 20 years are not used, there is a surprisingly simple explanation.

“This is a special type of bomb that is suitable for specific purposes. They should fit each other”, — says military expert and author Peter singer (Peter Singer). Judging by the information that the government reported about the current bombing, this time everything came together.

High-precision bombs can’t penetrate deep into caves and tunnels because of their fragments will stop at the first turn. Therefore, the militants simply burrow deeper. From penetrating into the ground bombs similar weaknesses. They are very effective when used against a single underground purposes, but to penetrate in deep and winding tunnels, these munitions are not able to. In this case massive bombs explosive action has a distinct advantage: they are the shock wave passes turns and penetrates deep inside the caves.

“We have produced a MOAB just for such purposes, says Cancian. — I think before we just didn’t know where these tunnels.”

In any other situation, the use of “mother of all bombs” is almost impossible. Because of the huge size to the target of such a bomb can deliver only well-defined planes. Plus, due to the force of the explosion it is inefficient at defeat of point targets. But the biggest drawback of MOAB is that it creates a risk to the civilian population.

“I think these caves are located deep in the mountains where very few people, therefore, worry about the civilian population is not necessary. But if you drop it on some Mosul, we bulldoze half the city,” says Cancian. These effects can be explained by the fact that MOAB was not used even in the most difficult days of the Iraq war.

It is important to remember that today’s bombing has attracted the attention not due to the fact that it testifies to the intensification of the fight against ISIS, but because it was applied very, very big bomb.

“Is it very different from the bombing with the use of In-1 arrives and satisfied with the carpet bombing of twelve 500-pound bombs? I do not think — said one representative of the national security structures, who refused to give his name. — We drop bombs in Afghanistan for 15 years. Does size matter?”

Last week, the United States dropped 27 tons of explosives on one a Syrian airbase. Of course, to compare these cases directly is impossible, given the nature of the shocks. But this points to the fact that the US regularly and in large quantities using explosives, whether it’s one bomb or MOAB dozens of “Tomahawk”. In fact, the United States has applied such heavy bombs before. During the Vietnam war, America dropped bombs semitones predecessor MOAB, known as a Daisy Cutter. One such bomb she used in 2001 to destroy the system of underground tunnels of the Taliban.

This time the “mother of all bombs” in the best way fulfilled its strategic objective by providing not only the physical effects. She also filed a corresponding signal. “The Taliban understood that the city’s new Sheriff,” said the representative of the national security agencies. We can assume that it also reached the ISIS, North Korea and Iran. And the fact that the bomb is big, is also helpful because it attracts media attention and helps spread the warning of the us military.

“In General, the use of bombs of such power is primarily a warning to other countries that they did not engage in a dangerous confrontation with the United States,” says Rebecca Zimmerman (Zimmerman, Rebecca), engaged in political studies in the strategic centre of the RAND.

“If you lose a dozen guided aerial bombs of the same total power, nobody to write about it and will not speak,” — said the singer. But the “mother of all bombs” — it makes an impression.