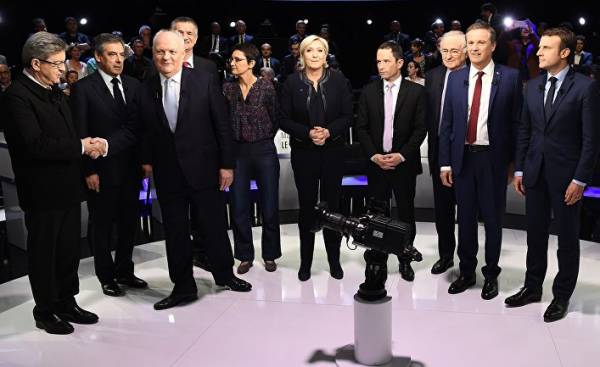 The presidential elections are approaching, and in French politics firmly addressed by the two ideas: an exit from the Eurozone and debt restructuring. Seven out of 10 French citizens say they want to save the Euro. However, many intend to vote for candidates who either advocate abandoning the Euro, as marine Le Pen of the far-right National front, or propose to withdraw from the Eurozone if the European institutions will not be rebuilt in accordance with their requirements.

The flaws of the Eurozone is understandable. First, the absence of a European budget prevents the automatic redistribution of funds between regions with strong economies and countries suffering from the recession, as often happens in federations around the world. Second, the limited mobility of workers and saving prevents the elimination of shocks to the national economies. Third, in an unstable economy it is difficult to negotiate on sovereignty under a common roof. Competition, balance of payment and unemployment in the Euro zone, quickly broke the General order due to the large inconsistencies in political decision-making.

But if France abandons the Euro, it will be for her serious consequences. To accurately calculate the possible consequences is impossible, but basic logic suggests that there is a great danger of large-scale chaos. Coming out of the Eurozone, freed from the obligations of the EU’s deficit and debt management, and deferments in payments and financial commitments, France will inspire far less confidence than at present. As a result, increase the discount rate on public debt, and about the same will increase the cost of servicing corporate loans and mortgages. Because of the depreciation of the national currency and the accompanying rise in import prices will hurt the family. The return of the franc could lead to a default. If the revenues and profits will be taken into account in francs, which will be a weak currency, it will be much harder to repay debts to the government, banks and French companies, which are entirely in euros. To prevent a substantial increase in the share of borrowed funds, France could go for debt restructuring, which is equivalent to the non-performance of payment obligations. To do this, she can adopt a law by which the debt of one Euro will be converted into the duty of one franc. Something like Argentina did in 2001 pesos.

Thus, France will not meet its obligations, which is very unusual for a wealthy country. Due to the default of the country will be shunned on the international stage, partners can use against her response, and she for several years will lose the opportunity to borrow abroad. If the distrust spread to French investors and the government can not Finance the deficit, the French government will have to immediately eliminate the budget deficit.

Consider the cost of the program political camps, opposed the Euro. “National front” on a conservative estimate plans € 100 billion additional annual costs (4.5 percent of GDP in addition to the current deficit of 3.5 percent). The program’s far-right candidate Jean-Luc Mélenchon (Jean-Luc Mélenchon) of the party “Unconquered France” provides twice the amount of the new spending, however, Mélenchon wants to compensate for them by increasing corporate and individual taxes totaling $ 85 billion. And last but important factor. If France were to leave the Eurozone, it will be a harbinger of the collapse of the EU. Outside of the EU it will not have the right to vote in international negotiations on a range of issues, including financial regulation, taxation, free trade agreements, as well as digital and environmental policy. To the opinion of the President of the European Central Bank and the European Commissioner for competition listen all over the world. Isolated from France will be little hope to be heard.

Another idea, which received wide distribution, is protectionism. This is partly a reaction to a very real problem: the governments of developed countries do not pay enough attention to the damage that globalization causes some of their citizens. From 1990, developing countries abandoned protectionist policies of import substitution and gave preference to an open market economy, making trade flows reconstructed along the axis North-South. In General, developed countries benefit from this, but many of their workers, especially the unskilled, are very difficult to find high-quality work. Professional retraining and professional development, meanwhile, lags behind. However, protectionism is not a magic wand for the citizens of France and other countries, for that matter. He only provoke retaliatory measures from trading partners and deprive France of the benefits of international specialization, eliminating the incentives for competition, which pushes companies to improve. Protectionism will also not help France to meet the challenges of digital technology.

French voters want change. They feel that political leaders are not doing enough to protect them, and that they have no concrete plans for an uncertain future. But change for the sake of change is dangerous, especially if they are based on prejudice and selfishness. Reasonable changes excite much less, than sudden conversion, but the only thing that can give people genuine hope.

Jean Tirol — head of the Toulouse school of Economics, Nobel prize in Economics 2014.