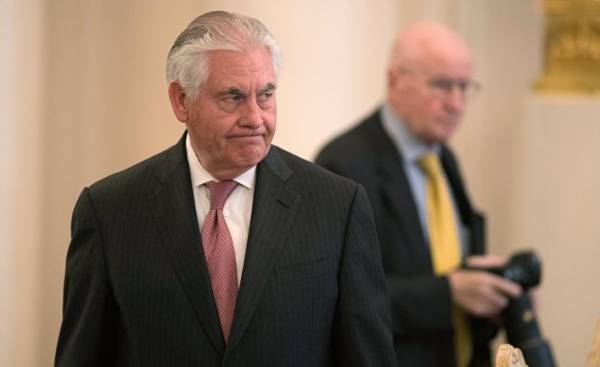 The first intergovernmental dialogue between the administration trump and Putin illustrated that the prospects of bilateral relations is extremely vague. Russia was visited by U.S. Secretary of state Rex Tillerson, who was considered Pro-Russian politician. The focus was whether the parties to improve relations, which the Obama administration has reached the worst state since the end of the cold war, but ultimately became noticeable only to the depth of the differences between the countries.

The direct reason is the confrontation over the situation in Syria.
USA launched a missile attack in Syria, stating that Assad’s administration used chemical weapons. Russia criticized the United States, calling these actions are illegal. In turn, Washington is putting pressure on Russia to reconsider its policy, including in support of the Assad administration.

One time President, trump declared strengthening of relations with Russia. That is why Russia was bound to be mistrust in connection with such changes in his behavior.

Moreover, during the summit of foreign Ministers of the G7, held this week, the parties expressed their understanding in regard to American strikes in Syria. As a result, Russia was forced once again to realize that she is in confrontation with the West.

Indeed, the still unknown perpetrators of the use of chemical weapons. US military action in the midst of the attempts of the UN Security Council to find solutions to this problem raises questions from the point of view of international law.

Nevertheless, Russia itself has used its veto when the UN security Council submitted a draft resolution, which demanded that Assad’s administration assisted in the investigation. Thus emerged the passive attitude of the Kremlin towards finding out facts. Moscow not only covers the Assad administration, but also turns a blind eye to war crimes.

Even if not to take into account the current issue of chemical weapons, the fact that Assad’s army has repeatedly launched air strikes, including civilians. Russia has tacitly approved of these actions and prevented the activities of the United Nations.

Currently, Russia and the United States must give maximum priority to the war charges. They must cooperate to give the international community an opportunity to stop the bloodshed throughout Syria and allow the peace negotiations to success, which will contribute to the completion of the civil war.

Wherever the conflict broke out, chemical weapons should not be used. Should hurry with the investigation into the incident on the basis of the UN and also with the fact that chemical weapons do not fall into the hands of terrorists.

In order to eliminate the “Islamic state” (banned in Russia — approx. ed.), Russia and the United States should not support the Assad administration and the opposition. They should exert every effort to bring the parties to the negotiating table.

During the meeting of Ministers of foreign Affairs of Russia and the United States, the parties came to an agreement about the need to improve relations between the two countries. They have also agreed to establish a working group.

When dealing with various issues, including the problem of North Korea and nuclear disarmament, can not do without the participation of Russia and the USA, as well as their cooperation. I wish these countries realized the gravity of its responsibility for the stabilization of multifaceted peace and continued dialogue.