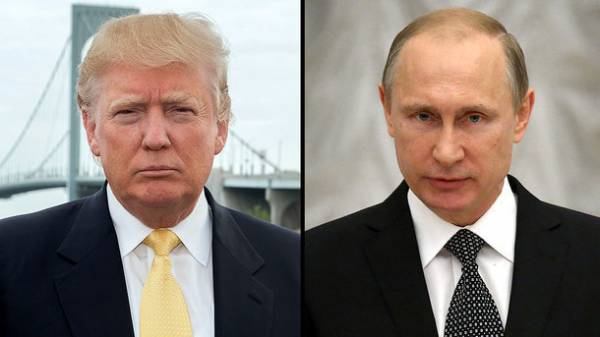 Missile attack on the United States based shayrat in Syria showed that the prospect of friendship between Donald trump and Vladimir Putin may not be the biggest risk to the world. Over time, the more plausible it seems that two self-centered leader will start to conflict with each other. It was in the pages of Gazeta Wyborcza writes columnist Waclaw Radziwinowicz, reports ZN.ua.

“In the night from Thursday to Friday, the President trump has completely destroyed the reputation of Putin as the largest international bully who can pick up anything you want. And this reputation, in fact, was our main trump card in international politics”, has commented on American missile strike the observer of “Echo of Moscow” Yulia Latynina.

Radzivinovich notices that she’s not the only one who thinks so. Observers who follow Russian politics, expect that now the Kremlin will fight against the White house for the title of “first guy on village”. And this is creepy.

“Well, that’s all. Remnants of pre-election fog has dissipated,” he wrote on his page in Facebook Russian Prime Minister Dmitry Medvedev, Recalling the wave “trampoline”, which came to Russia not so long ago. According to him, firing at Syrian base, the US came “to the brink of armed confrontation with Russia.” Moscow also announced that it was suspending its coordination with the US on the issue of airstrikes on Syrian territory.

According to the columnist, then I “just have to wait who shot first.” Russia also promises to strengthen the air defense of Syria and to give her a more modern radar system. On this Israel will not watch idly by.
His planes have repeatedly bombed the positions of “Hezbollah”, fighting on the side of the Assad regime, which is also in Alliance with Russia. The Syrians tried to shoot down Israeli planes. But Israel warned that if it happens again, he will destroy those who shelled his bombers.

In Moscow, analysts point out that the reputation of Putin as a tough player was hurt, because he didn’t have the courage. Two hours before the missile attack on the Sirat, the Americans warned him that they are going to release their “Tomahawks”. But the Russian President did not dare to give orders to its military in Syria to prepare to intercept us missiles. In Syria the Russian complexes With-300 and With-400, but they remained unused.

Now the Russian generals explain that the missile system in Syria is only needed for the protection of Russian forces. But earlier in Moscow said. For example, a spokesman for the Russian foreign Ministry Maria Zakharova openly stated that Russia has deployed over Syria “umbrella” to protect Syrian military bases from the American attack. But Putin did not dare to defend its ally. Now, according to Russian media, the Russian President refuses to meet with U.S. Secretary of state Rex Tillerson, who on Wednesday will arrive in Moscow. Meet him only the Minister of foreign Affairs Sergey Lavrov. In turn, the head of American diplomacy unlucky in Russia “ultimatum”: either Moscow will curb Assad, or confrontation with Washington could worsen.

We will remind, on April 7, the U.S. military launched 59 missiles at the military base of government forces in Syria, in the province of HOMS. Missile strike is a response to a chemical attack in the Syrian province of Idlib.

As reported, the national security adviser of US President Donald trump Herbert McMaster leaves open the possibility that a tramp is ready for further military action in Syria, but, according to him, trump is committed to a “political solution” to the Syrian crisis.