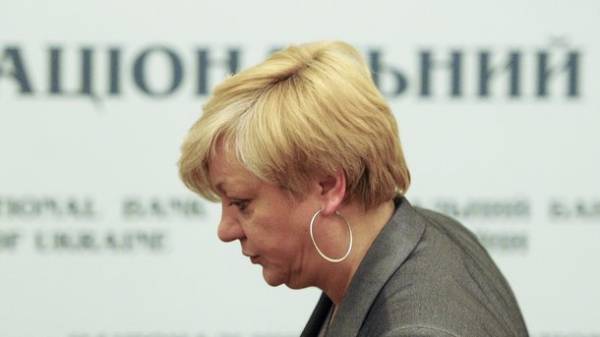 The head of national Bank Valeria Gontareva resigns. However, still needs the approval of Parliament, but the vote can pass even this week.

Yet the question remains, who will take the place of the head of the NBU. Experts have called for the head of “PrivatBank” Oleksandr Shlapak, the head of the state property Fund of Ukraine Igor Bilous (who yesterday resigned), the head of the Ukrainian interbank currency exchange Anatoliy Goulet, Chairman of the Board “Raiffeisen Bank Aval” Vladimir Lavrenchuk, head of the Council of the Independent bankers Association of Ukraine Roman Shpek, adviser to the President of Kyiv school of Economics Ihor Shumylo. While the acting Gontareva appointed its first Deputy Yakov Smoliy.

The experts shared with the “Today” memorable Valeria Gontareva, the post of chief banker of the country. Thus, the Executive Director of the Independent Association of banks of Ukraine Olena Korobkova believes that she is a person from the business environment, the head of the regulator acted tough, but justified. “Thanks to her iron will, today we have a fully transparent system of ownership of banks, no banks vacuum cleaners, which worked on the principle of a financial pyramid. She took a principled position that the Bank ownership structure should be transparent and the Bank should have sufficient capital to meet its obligations to customers. And it is this position steadfastly maintained despite tremendous external pressure all the discontented,” he listed Korobkova.

In turn, financial analyst ICU Michael the demo notes that Gontareva well perceived abroad, which helped Ukraine, in particular, to negotiate with the IMF to receive new tranches. “Gontareva is one of the few officials, which is very positive international partners: IMF, world Bank and G7 ambassadors. Her cadence was closed dozens of banks-pyramids and banks of washes, and the real owners of the banks to stop hiding behind the Cyprus names. The banking sector has ceased to be the preserve of oligarchs, for that Gontareva “award”, received the coffins and other threats,” notes demo. At the same time finanalitik adds that “ordinary citizens will remember her more for the devaluation of the hryvnia”.

And economist Ivan Nikitchenko noted that most negative emotions Valeria Gontareva is among ordinary Ukrainians. “The peak of the distrust in banks as the time came when Valeria Gontareva. Blame – bankopad, which gave ordinary people an understanding in what the Bank can keep the money. Furthermore, the population constantly fears that the hryvnia could collapse at any moment, which contributes to the manic habit of the population to keep money in different currencies. Also we should not forget about the tight monetary measures by the NBU. We are talking about quite large at the time the rate hike, when the expediency of such a sharp jump, there is a lot of doubt. This has led to the freezing of lending, and hence, the lack of support of economy”, – said the economist.

The expert said that bankopad seriously hit by the financial capacity of the business, because although the Deposit guarantee Fund of natural persons and shall pay to the Ukrainians compensation against loss of deposits in the broken banks, but of such payments until businesses have is that dream.

Otmetim that the head of the National anticorruption Bureau of Ukraine Sytnyk said that the leadership of the NBU will be checked for involvement in the embezzlement of funds allocated for refinancing of a number of commercial banks,