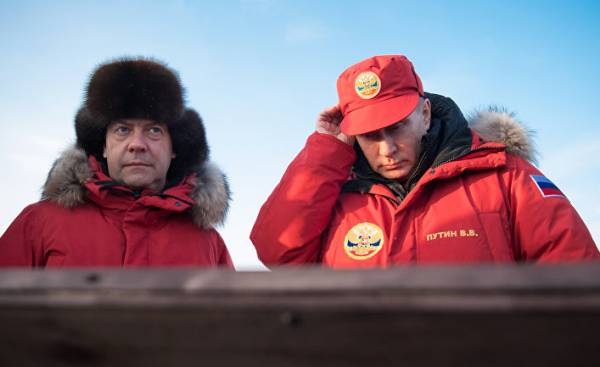 The recent sudden intensification of political life in Russia has stirred up interest not only in the country but also in the neighborhood. Nothing surprising in this. When we are talking about a country with a population of 145 million people, and even with nuclear weapons, it is impossible to remain indifferent to all that is happening there. But what is interesting: everybody is raving about the revolutionary events in Moscow, and Putin with screen shares with the people their impressions about the stay in the Land of Franz Joseph…

Evaluation of the events are different, as well as predictions for the future. Alarmists and too zealous supporters of the current government see the rallies on March 26, the world conspiring to bring Russia to its knees, depriving her of sovereignty and extraction of natural wealth.

The second pole — ardent opponents of the current government — see protest activity is a definite sign of the imminent revolution and the changing of the guard on the Kremlin Olympus.

Most likely, actually, as in most cases in world history, the reality is somewhere in the middle.

Of course, in today’s world is very strong competition between the major powers, and Russia among them is not an exception, but the habit to see in everything the conspiracies and intrigues — specific phenomenon. It has not escaped people with typical Soviet psychology, but it is affected equally, and the typical Americans, not to mention the traditional European thinking. And all these earthly points above all else is the love of neighbor… let’s Say, ex-Soviet people everything is clear. They are long and well-learned: if someone goes out — means “it is necessary for someone”.

In some way it’s even insulting to the people — it turns out that people, Nations, society is so crammed and devoid of independent thinking that can’t even go outside if they it will not solve some smartass in a dark, cool rooms.

Where to watch the CIA!

While fans think that exaggerating the intellectual capabilities of the various intelligence agencies and political elites, attributing them to nonexistent ability to think and plan 10 steps ahead…

Alas, it is infinitely far from reality, and the CIA learned about the terrorist attacks of September 11 on CNN is further proof of that. In intelligence, in bodies involved in decision-making and policy definition, no geniuses and clever no — there are ordinary officials who wipe pants on the chairs, trembling over their salaries and loans…

The view that they can with one hand to force whole Nations to change their minds and come to street protests where no reason is too exaggeratedly high estimation of their brain activity.

On the other hand, the second extreme — the spark will kindle a flame is not too close to reality, is quite common, including overseas. It comes from the category of citizens, so not loving the current Russian government that has lost the ability to adequately assess the situation. Wishful thinking, alas, not only post-Soviet need, but often manifested in the West. Even in the EU, at least in the US. And that is nothing new or surprising. People this is what happens when there is something they really want.

Emotions cloud people’s vision, so sometimes they see not what is, and what they want to see.

Don’t want to see that no one, even the biggest rally, and especially if it’s pretty average, is not in itself a sign of the coming revolution. No awakening youth does not by itself guarantee the youth wakes up, then falls asleep, then she have more important things to do, and in the end it inevitably Matures.

The fact that the protests on 26 March, there were many young people — it is rather evidence of their personal qualities than on the potential of a hypothetical future revolution.

Many of those who predicted Russia serious disasters, not including her mental peculiarities, and arguments lead quite at first glance a reasonable argument kind of intractable ethnic conflicts, General weakness of the administrative system, corruption and the fall in energy prices.

Even according to government forecasts, in 3-4 years Russia will start production decline of oil and gas, then revenues will sharply fall.

It is easy to imagine that this will cause discontent among regional elites, accustomed to a large and mostly gratuitous money.

Overall, the arguments are quite clear and in a sense, quite logical.

Mind Russia not to understand…

The contradictions of the current RF — is really disastrous. Rather, it could be disastrous if they were from Germany, England, France or any other European country.

But not for Russia. It is enough to read several works of classic Russian literature, as will become clear, the current situation is not abnormal for Russia, and even on the contrary — it is almost the norm. In this country it was always more or less as it is now.

Great writers Saltykov-Shchedrin, Chekhov, Gogol, described the manners of the Russian bureaucracy, if not to take into account the purely technological difference like smartphones and Internet — everything looks almost the same as today.

In Russia today we see nothing new or unusual. Everything is the same as it was. Officials are also thieving, roads are also bad, autocrats, feudal lords had replaced the local bureaucrats and businessmen, the people were always unhappy, but passive, intellectuals always raved about revolution, but when faced with national indifference, withdrawn, depressed and cursed.

And similarly hundreds of years, then experts from Europe, and largely from Russia, too, predicted their collapse, disintegration, terrible disasters. And whenever did not occur, confirming that at first glance seems far from an obvious one — the current Russian system of governance with all its pluses and minuses — is the natural state of the country.

The current Russia — it is real, regardless of whether it is good or bad.

Of course, this does not exclude the possibility of individual explosions, riots and uprisings, in full compliance with the classics — a ruthless. But the problem of the Russian revolution, and the revolution in General, is that it is impossible to predict and calculate.

Revolution defies any logical explanation why the people last night quietly and meekly endured all the hardships of life and the arbitrariness of bureaucracy, and this morning — took up pitchforks and axes. Like last night, nothing terrible and out of the ordinary had happened.

A revolution is impossible to predict as it is illogical — it’s not math, it’s more of a philosophy or psychology. This is even admitted in a fit of revelation, Vladimir Ilyich himself, who admitted once, they say, if not for the war, would have to wait for the Russian revolution even 200 years! It can only be felt — with some absolutely incomprehensible and inexplicable vibes. Like all as always, nothing happens, but the air is full of tension, which is impossible to explain in words.

As you know, two weeks before the uprising in Egypt American experts, and the secret services reported to the President that Mubarak controls the situation in the country and no reason to worry about this no. What was all over — we already know — a few days Mubarak has been released after almost 6 years of imprisonment.

And Mubarak on the loose

By the way, this episode more than eloquently shows that no experts from the intelligence services not see 10 steps ahead, as we to this day do not get tired to convince various other pundits.

Calm down, the revolution is postponed!

You can say definitely, no country in the world can be insured against the revolution, especially if it is a post-Soviet country with a rich bureaucracy and poor people.

But predictors can relax. Revolution never happens according to the forecast. You can predict a revolution 10 times, you will get all the arguments in favor of this, and she’s not going to happen.

Or will happen on the 11th time you’ve already put your hands down, will waive any and all possible predictions, and let it go.

Revolution nobody warns — it comes on its own initiative, with no one coordinating the date.

If you go back to the current debate on the revitalization of the Russian opposition, it is obvious that there is nothing revolutionary on 26 March did not happen. People expressed their opinion and went home, that was it.

Today, Russia is absolutely not ready for revolution. Passion is at zero, people are not that much satisfied, but he especially not compare with anything, because he never lived better than now.

In today’s Russia, a situation almost spell described almost all the Russian classics. Its distinctive feature is increased the rebellious spirit of the opposition-minded intelligentsia, and utter, absolute apathy of the population.

About any revolution or even mass protests in this situation is to not speak.