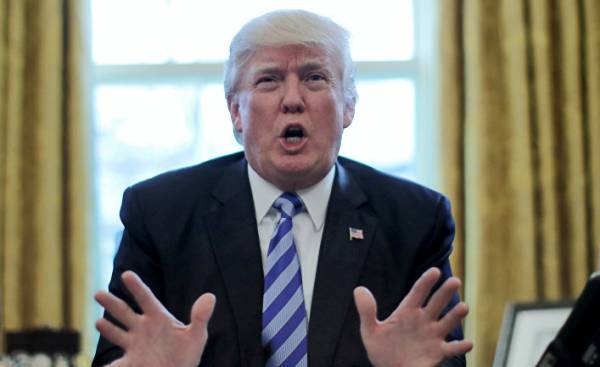 As it happened, that the President of the United States Donald trump turns out to be very close ties with archenemy Russia, that it even became the subject of an FBI investigation? Alternative truth is shocking: so-called man Donald trump is actually a malfunctioning robot made by Russia.

Trump’s name is an anagram

The truth about Robocrane is in his name. “Donald Trump” is an anagram of the letters “MDU, Portland”. It is a production code that indicates where it was designed and by whom: MDU Resources.

It looks harmless American energy company, but behind the facade is, of course, a top-secret Soviet research project, launched by Joseph Stalin.

The trail leads into Cork Bay

The roots of the history of the Soviet robotic project date back to the First world war, when the Russian submarine fleet made a startling discovery at the bottom of the Irish sea at Peel. What they found is not known, but we know that this was the beginning of what will later be called the Portland project. The Russian continued to show interest in this area and were last seen there, as far as we know, February 14, 2009, when it turned out that the cause of the oil spill was the aircraft carrier “Admiral Kuznetsov”. What we on this coastline, we find one of the three European hotels trump, of course, is no accident.

The Recruitment Of Fred Trump

In 1924, Stalin gained power over the Soviet Union, and, as if by coincidence, the same year the company was founded MDU Resources in Minnesota. There preparations were made for future implementation of robots in American government.

During the second world war financier Fred trump (Fred Trump) worked on the construction of state-funded housing for the marine corps in the shipyards on the East coast, where he noticed a Soviet agent Harry Dexter white (Harry Dexter White), a member of the Silvermaster Spy Ring.

In 1945, the company MDU pulled off its biggest deal by acquiring the Dakota Public Service Company. In fact, this purchase covered the laundering of multi-million dollar sums, which allowed the Soviet Union to invest new funds in their experimental work, and in 1946 was born the protipe of Donald trump. A year later, in 1947, registered MDU subsidiary Oregon Electric Group in Portland, to strengthen the cover for its clandestine manufacture of robots. Accommodation on the West coast was of strategic nature: away from the watchful eyes of the Pentagon and close to busy route for Soviet submarines. That Robotron was produced on American soil is automatically allowed to register him as an American citizen, so that one day he was able to gain power over the entire country. In exchange for the promise to continually Finance his business Empire Fred trump agreed to adopt Robocrane and give him thus an alibi real boy.

The knowledge that Donald trump is a robot, explains all:

1. Fake body. Trump is a typical example of a failed attempt to mimic a human being. Hand turned out a little on the small side, skin painted the color, which is not found in nature, the so-called hair speak for themselves. The diligence with which trump denies their obvious structural flaws proves that there’s something to hide.

2. Anger. Empathy artificial intelligence to simulate the most difficult, because it requires the ability to recognize other people’s feelings. Here it becomes clear that the software is trump’s defective. Besides, his attitude towards women has not been updated since the 1940-ies.

3. Lie. When the man is lying, it can be seen in subtle gestures, tone of voice and facial expressions, but according to the Swedish expert on body language Fexeus Henrik (Henrik Fexeus) no such signs to recognize when lies trump, because he is programmed for it.

4. Language complexity. Sometimes it trump sounds like a broken tape recorder, and so he-he and there is the language center.

5. A lack of understanding. Trump often says something very different, and not about what you asked and this becomes understandable if we recall that his speech recognition 60 years older than Siri.

6. Cheating with taxes. Trump refuses to publish the declarations — and probably he made the leak a fake version into the hands of journalist David Cay Johnston (David Cay Johnston) — because all these maintenance cost of the robot would look suspicious.

7. The lack of blood. There is not a single document testifying that trump can be a blood, he never even cut paper with the government. Why?

8. Bathing. If you Google “Trump + beach” you will find only one photo with trump, where he is hugging the water with his first wife, and the boundary of the photo is above the ankle that allows you to hide the fact that trump is likely near water than in it. Everything points to the fact that Robotron not completely waterproof.

9. Sobriety. You also think that sobriety is a very unusual trait for such a impulsive bully like Donald trump? But there is a simple explanation: the robot can not drink, and if trump has knocked over glass after glass without any effect, it would cause suspicion.

10. A father complex. All known cold attitude of Fred trump to his son just seems logical, if we remember that Donald is not his biological son, and adopted machine.

11. The obsession with oil. Love trump to pipelines and vehicles on petrol looks natural for someone who depends on lubricants.

12. Wife. Of course, it is no coincidence that two of the three wives, trump, Ivana and Melania, from Eastern Europe. Russia needed the agents on the situation and contributing to the concealment of the true nature of the trump.

13. The forgotten daughter. It is no coincidence that his middle daughter, Tiffany trump from American Marla maples (Marla Maples), called “the forgotten”. The very existence of Tiffany hushed, and there is an obvious explanation: it is the only so-called children, who is not a robot.

The original program of Robocrane was to get as much influence at all levels in the United States, and a constant flow of Soviet money helped him to recover from at least six bankruptcies between 1992 and 2009. Since the early 1990s, maintenance trump was engaged in agent Tevfik Arif (Tevfik Arif) from the former Soviet Republic of Kazakhstan. Officially Arif was assigned to the Soviet Ministry of trade from 1975 until the collapse of the Union. Shortly thereafter, he was sent to the United States, and as a cover from the Kremlin-funded activities organized a company for property management Bayrock Group LLC, which settled — of course the trump tower! The company name is not accidental: as the name trump, Bayrock is an anagram. If you rearrange the letters, they form words “Cork Bay”, the name of the place where it all began.

The company Bayrock Group LLC became a new channel for the influx of Russian money in the Trump Organization through its partnership with the Eurasia Group, under the leadership of the Kazakh billionaire Alexander Mashevich. He, in turn, collaborated with two other Kazakh billionaires, Pathom shovevim and Alijan Ibragimov, who in good memory of the Kremlin operated energy company Eurasian Natural Resources Cooperation. When the connection between trump and the Bayrock through the Kremlin at the junction of decades began to show, the cooperation was terminated, but the signs of their relationship continued to emerge to the surface. In August 2016, the head of the company trump by Paul Manafort (Manafort Paul) left his post when it became known that he had taken of 17.7 million dollars from Pro-Russian former President of Ukraine Viktor Yanukovych. February 13 this year, the national security Advisor trump, Michael Flynn (Michael Flynn) was forced to resign after it was discovered that he lied about his contacts with Russia. Perhaps not coincidentally Portland in the same week suffered from mud debris flow. Not news that the shower can be invoked using silver iodide, and the chaos for 900 tons of clay, Zataevich territory probably was a great opportunity for Russia to remove all traces of the Portland project.

The investigation is conducted

On 20 March, the chief of the FBI James Komi (James Comey) reported that the investigation ties Donald trump with Russia is in the summer of 2016. But we now know that will become clear in the course of this investigation, if it succeeds:

Donald trump was not born in the United States.