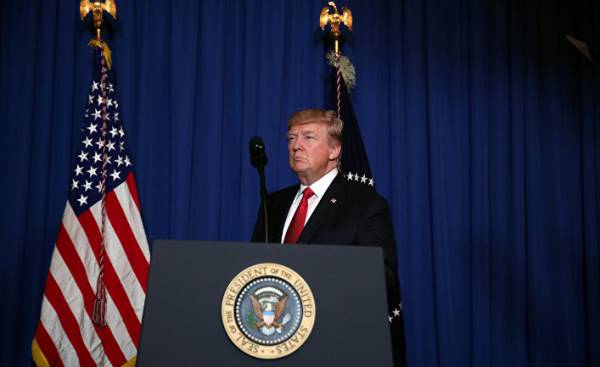 “That night, I ordered a targeted strike on the airfield in Syria, where was a chemical attack”.

With these words yesterday evening, April 6, from his residence in Mar-a-Lago trump, the President announced the beginning of punitive action against Assad. Almost an hour before that, 59 Tomahawk missiles were fired from ships “Ross” and “porter” in the Mediterranean to strike at the basis of the Shirt, located near HOMS. According to American intelligence, it is from there that flew the airplanes that dropped chemical bombs on the population of the city of Khan Sheyhun.

“On Tuesday, Syrian dictator Bashar al-Assad carried out a horrendous chemical attack against innocent civilians. Using deadly paralytic agent, Assad took the life of defenseless men, women and children. A lot of people died a slow and painful death. Even cute babies were killed in this barbaric attack. No child of God should not be subjected to such horror,” he said.

Next, trump spoke about his decree on punitive measures and explained their reasons: “In the vital national interests of the United States is to prevent and prevention of the use of lethal chemical weapons. There is no doubt that Syria has used banned chemical weapons, violating their obligations under the Convention on chemical weapons and ignoring the warning of the UN security Council”. According to the President, “the years of the previous attempts to influence the behavior of Assad have failed, and this is a dramatic failure. In the result the immigration crisis continues to worsen, and the region increasingly destabilized, threatening the US and its allies.”

Next, trump called: “tonight I call upon all civilized Nations to join us in the quest to end the slaughter and bloodshed in Syria, and terrorism of all kinds. We pray to God to send us the wisdom to face challenges of a troubled world. We pray for the lives of the wounded and for the souls of those who had already left. And we hope that as long as America stands up for justice, peace and harmony will eventually prevail”.

On the sixth of April began with the confirmation by U.S. intelligence, carried out before the chemical attack was organized by Assad’s regime. Exploration has documented that the aircraft took off from a military air base shirt. Traced their route, the radar determined that they flew to the city of Khan Sheyhun where the bombs fell. Trump has asked the Pentagon to provide him with military assets for retaliation, and the Secretary Mattis flew after him down to Florida to talk about them in detail. Trump was presented with three options, the President chose the most reliable ones (because the possibility of collateral damage was limited) and is more closely associated with the attack, for which he wanted to punish Assad.

The leaders of the American administration, namely trump, Mattis, Secretary Tillerson gathered at Mar-a-Lago and the head of the White house gave permission for the operation. Washington reported some of its allies, but not Vladimir Putin. However, the U.S. military has warned their Russian counterparts in the territory, about the beginning of the attack. On the basis of do were military from Moscow, and warning gave them time to evacuate. Here there were two other problems: first, it was necessary to make sure that not a single Russian soldier was not injured, because it could provoke a direct confrontation of the two powers; and secondly, it was necessary to understand the Kremlin: if the chemical attack began with a base, where Putin’s war, they either did not understand what was happening, or were complicit.

Targets of the airstrike began, the runway, the planes left in the hangars and the fuel column. The strategic goal was to make this database unusable and destroy its equipment.

The political aim was to let Assad, Russia, Iran and the world that the United States will not tolerate any violations. Just a few days ago, the administration, trump said that the overthrow of Assad is not a priority for US, which we intend to focus on combating terrorism. In the past, however, the White house criticized his predecessor Barack Obama because he insisted on observing the “red line” established in 2013, when Assad carried out a chemical attack in ghouta. The President was forced to react to maintain your credibility. It took him two days to change your mind and make the decision about the intervention.

After the attack Secretary of state Tillerson said that the political line of the US in Syria remains the same: its aim is to reach a political agreement on the future of the country during the negotiations in Geneva under the auspices of the UN. Done on the eve of the punitive measures are not, therefore, the beginning of a long military operation on the territory of the country, and demonstrate a willingness trump to act in cases when it deems necessary. If Assad will once again use chemical weapons, now he knows what the reaction could be followed. If he wants to escape, he needs to sit down with serious intentions at the negotiating table in Geneva, which will probably mean the end of his reign and the de facto partitioning of Syria, even if formally it will remain a single state.

It is a signal that trump also sends and Russia: now she must decide what to do: throw your challenge to the Americans or to cooperate with them to defeat the terrorists, to stabilize the country and to convince Assad to relinquish power. It is a signal for North Korea, and it was sent just in time for dinner trump with his Chinese counterpart XI Jinping in Mar-a-Lago. The behaviour is changed: the power is again a tool that Washington is ready to use in those cases where politics and diplomacy cease to operate. Even if its use will lead to increased conflicts.