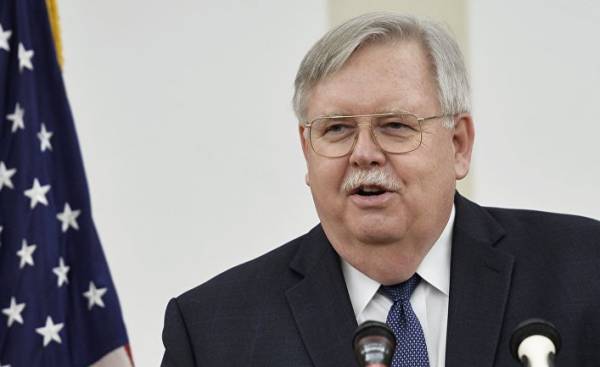 Moscow — the U.S. Ambassador to Russia John Tefft on Tuesday for the first time since the election of a new President of the United States appeared in the Russian segment of the Internet Facebook and the Russian network “Vkontakte” to answer the questions of their users.

Practice these sessions of questions and answers in social networks John Tefft has tried and tested, but in the last time to mingle with the guests page of the U.S. Embassy in Russia, the diplomat just not enough time.

First and foremost, the Ambassador said about the most important and tragic for Russians event recently: “I would like to Express its deepest sympathy to the families and friends of those who died in a terrible terrorist attack in St. Petersburg.

As you probably know, yesterday the President of the trump in the conversation with President Putin expressed his condolences on my own behalf and on behalf of the American people. President trump also offered full support of the United States in response to this terrorist act and bring the perpetrators to justice.

John Tefft also quoted another American diplomat about this: “said the US Ambassador to the UN, Nikki Haley, the pictures of dead and wounded people in Saint-Petersburg break your heart. You can be sure that the U.S. will support Russia in the fight against extremists who continue to senselessly harm innocent people.”

Commenting on the most worrying news of the world, in particular, the recent rocket launches, carried out by the regime in North Korea, and possible response to them from the United States, the diplomat said: “North Korea and its people there is no need to be afraid of the U.S. or its neighbors in the region who seek only to live in peace with North Korea.

With this understanding, the United States urged North Korea to abandon its programmes for the development of nuclear weapons and ballistic missiles, and to refrain from any further provocations”.

A few of the positions that was occupied by Washington till the US presidential elections in November last year, remained unchanged. This, in particular, it is possible to say about the U.S. position on sanctions against Russia, which was published by John Tefft in response to a question: “As the President of the United States, our sanctions remain in force, but we will be ready to weaken them, if Russia fully complied with its obligations under the Minsk agreements”.

The Ambassador also responded to questions from users of social networks associated with Russia’s intervention in the U.S. presidential election. According to him, this information is worrying: “Many months ago, U.S. intelligence has concluded that Russian authorities interfered in our electoral process.

At that moment the Director of National intelligence James Clapper said that the Russian government was behind the hacking of e-mails from citizens and institutions of the United States, and that “only high-ranking officials in Russia could sanction such activities.” In the world press a lot of messages about fears of Russian interference in the electoral processes in Europe. Such news is of great concern to the leaders and population of these countries”.

However, the two countries have converging points in history, and the anniversary of one of those moments is now approaching — this is another Day of cosmonautics in Russia, celebrated on April 12.

The Ambassador highlighted the role of USA and Russia in space exploration: “the Russians and the Americans are justly proud of all that our country has made to space exploration, from the historic flight of Yuri Gagarin up to last week’s successful test launch of the reusable American company SpaceX.

I look forward to a trip to Star city to watch the following launch into space of joint Russian-American crew, the aim of which is joint expanding the boundaries of human knowledge. If together we can achieve common goals in space, we without a doubt can do it here on Earth.”

There is another field of possible cooperation between Washington and Moscow, both countries are close both geographically and historically — it is the Arctic.

John Tefft told the Russian-speaking users of social networks about your participation in a recent conference on this subject: “the Conference “Arctic — territory of dialogue” served as a perfect example of how this can look in practice international cooperation.

The Arctic countries can be proud of the fact that the Arctic region living in peace, political stability and a high level of cooperation among all States. Also I had a rich cultural program in Arkhangelsk”.

The Ambassador reminded that the Arctic countries have a body that can resolve issues of this great Northern territory: “the Arctic Council, which is currently chaired by the US, gives a good example of how we can work together to solve such difficult problems as overcoming the consequences of environmental change in the Arctic and the need for planning the course for the environmentally safe development of the natural resources of the region.”

It is obvious that the participation in the conference “Arctic — territory of dialogue” was for John Tefft memorable event, not only due to the fact that it was attended by Russian President Vladimir Putin, who marked the presence there of an American diplomat.

The US Ambassador spoke in the Russian North, not only with officials and politicians, and spoke about the users of Facebook and Vkontakte: “During my recent trip, I met with a group of students of the Northern (Arctic) Federal University in Arkhangelsk and left them with a feeling of deep admiration for the Russian youth. As elsewhere, young people are building a better future for their country with idealism and passion.

Among them there were even a few American students who are studying together with their Russian peers. And the same number of Russian students studying in the United States. Their experience will serve as the basis of personal relationships, which will bring together Russian and American leaders of the next generation. Such cooperation in the present gives me great hope for the future.”

During the questions and answers in social networks people are asking John Tefft not only about politics or international relations: among the topics are culture, food, and travel. The Ambassador said he had been familiar with the work of the recently deceased poet Yevgeny Yevtushenko more than 50 years: “This poet was the voice of conscience. With his work, I first met when I was in school, at the peak of the cold war in the 60-ies.

Yevgeny Aleksandrovich Yevtushenko was a true citizen of the world, who spoke with a sense of human dignity and moral purity, which we were all United. Americans (including me) are brought up on Russian culture. We will miss Eugene A. in the United States, where he long taught at the University.”

More about the culture — it turned out that the U.S. Embassy in Moscow has fans of the singer Britney Spears, what John Tefft, and said to his readers: “Yes, I like the work of Britney Spears. And I also know that many employees of the Embassy and the Americans and the Russians really love her songs. I have always said and I will repeat again that music is what brings us together”.