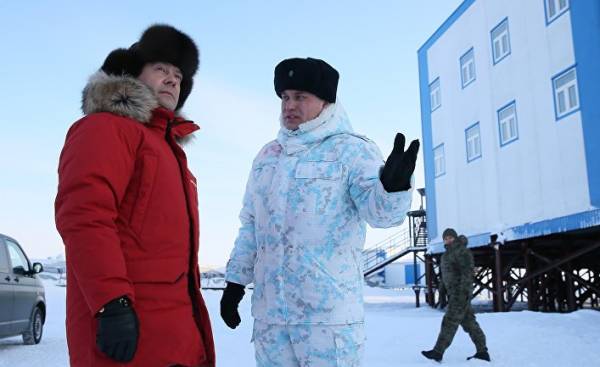 With the fall in the President’s Administration on an agreed package of documents on the confluence of constitutional and Supreme courts. The project has almost no opponents, except the Chairman of the constitutional court Zorkin in December expressed cautious protest, which, however, no one to take seriously.

Supersu should unite in their hands three tools: law-making (for it before the Highest court of arbitration), the correction of miscarriages of justice (Supreme court) and constitutional interpretation (actually COP), creating a frame that uses two other tools. To supersu appeared to need a bit to edit the Constitution to tweak a few laws and assign to a shape suitable caliber. From the point of view of many, the following place of work of Prime Minister Dmitry Medvedev has long been determined.

To come up with a better candidate Medvedev is difficult, if you look at all of this from the Kremlin, and not with the lantern of the monument to Pushkin. And difficulties with the appointment will not. The Prime Minister will not have to go through humiliating talks with the state Duma deputies (constitutional court judges appointed by the Council of the Federation), or to request a certificate of legal experience in St. Petersburg Collegium of advocates. Instruction of the Ministry of justice explaining the concept of “legal experience” from the law on the constitutional court States that it is not only about the work of the court, the Prosecutor or the legal profession, but also on civil service as a whole. Even if the candidate judges have no legal education (Medvedev it is), it is not so important: fifteen-year length of service — reason enough to become a judge of the COP. Topic “flawless reputation” of the future judges (also the wording of the law on the constitutional court) the matter has nothing: on the background of some reputations Medvedev — angel, against other “perfect” in the country at all.

The only question is the timing and drama of the campaign. If President Putin is preparing for the fall personnel moves, whatever this phrase may mean that the package is about supercade can be held in early September to near the end of the month to show the country a new Prime Minister and old to send in Peter. If moves are reserved for the winter, Medvedev also easy to modify and to winter: the Ministry of Finance and the Central Bank discuss the budget directly with the President; the strategy of economic development says Medvedev dismissed Alexei Kudrin at the Center for strategic research. There is nothing more important than these two documents on the agenda of the government today is not, and Medvedev has little bearing on them. Political pressure on the Prime Minister, working for him rather than against Russia officials of such rank is not to be fired under pressure, it is known to even small children.

If something is of interest today, so it’s not a future place of work of Medvedev, not meted out his term as Prime Minister, and she his political biography. Medvedev’s 51, he emerged from the reception Sobchak’s Deputy, Vladimir Putin, like a meteor swept across the Russian political firmament, has worked as a President, Prime Minister and now seems to be sitting with nothing. One of the most liberal politicians from among the friends of President Putin, Medvedev managed for nine years a political career to lose the trust of the intelligentsia — their own, native, class, quarrel with other liberals from Putin’s entourage, the fold increase number of enemies among the security forces and so on and so on and so forth. What’s wrong with Medvedev?

The answer to this question may look simple or difficult, depending on the desires of the questioner. Put simply, Medvedev has long been working in positions which do not quite correspond. The Deputy head of the Kremlin administration — obviously his position. The “social” Deputy Prime Minister — not quite. Medvedev is not able, as they say, “talking to people”, that is, to pretend that listens carefully and decisively respond to simple requests and complaints of citizens.

It is also not prone to hardware work: he just lacks the hardware of the veins, to beat such corrosive paper monsters, like Igor Sechin and Sergei Sobyanin. And managerial skills Medvedev is far from ideal: many officials who have worked or working with him, saying that he loves to listen to yourself than others. His career is an example of how the gap between social competencies and occupied by the post: you don’t have to be a liberal or a statist to see it.

Complex explanation should begin not with the question “what’s wrong” and the question “why still”. Why did Medvedev have worked where he worked and is working? In American politics today, one of the most important is the concept of “surrogate” — people representing the position of the President of the United States trump for the audience of that particular media. Medvedev was and remains the ideal surrogate, avatar Putin: the safest, in General, inert, smooth talking and not ashamed to change my views after his original.

In those days, when President Putin was still need a decent (by Western standards) surrogates, Medvedev was easily beaten in this field and Kudrin and Surkov and Sechin. Behind his words, which he still loves to say, was not worth anything except these words. Medvedev today, as in 2009, represents a policy for which public relations, media, rhetoric is politics. What others use as tools achieve the goals, Medvedev seems to understand as the goal.

Intellectual in the Kremlin

But it is not only in the personal qualities of the Prime Minister and the extent of their danger to his patron. Medvedev — a bright representative of the class, will first get a monopoly on power in Russia, and then split in two: one went to the Kremlin, others in opposition. It is about children nomenklatura intelligentsia of the two capitals, which became a talent pool for the oligarchy, and to senior Russian officials, and intellectual leaders of the opposition.

Khodorkovsky, Alexei Kudrin, Shuvalov, and Prokhorov originate from this layer: someone’s parents were on the middle floors of the Soviet elite, someone was headed by a University Department, but in General not very different from each other. Looking at what is today called the Moscow light, you notice that children in this part of the Soviet intelligentsia constitute its core: people raised in the atmosphere of the Soviet culture of compromise and European etiquette.

The question of whether they are in power or in power, is crucial to understanding the political biography of Medvedev. The tree of liberty as Jefferson argued, sometimes need to be watered with the blood of tyrants and patriots. Expanding this thesis in the opposite direction, we get the claim that the tree of tyranny requires for watering the blood of the lovers of freedom and servants of tyranny. The fact is that the children of the Soviet nomenklatura intelligentsia became suppliers of donor blood for wood modern Russian dictatorship: and as the “patriots”, and as servants, mercenaries of the dictatorship.

Odd, perhaps, is the thesis that neither Medvedev nor Kudrin, nor the other liberals never had the power, empirically confirmed many times. They didn’t shoot the White house, they were shot Yeltsin. They are not imprisoned and put law enforcers, the law enforcers put them and sometimes each other. In the case of Medvedev’s biography, this thesis is confirmed by the fact, how not to load a notorious effect of the presidential chair, which he held four years. Power in Russia (the true dark matter) are not “warm” any one who has its insignia: the greatness, or at least a prosthesis in the form of a high rating — the attributes of the individual, not the furniture. And in 2009, and in 2017 Vladimir Putin had more power than Dmitry Medvedev, although in 2009 the first was a subordinate of the second.

Power as rate, as challenging as the decision and the fate — not a lot of the intelligentsia. This is perhaps the main conclusion that can be drawn from Medvedev’s political biography. It is not the unwillingness to compromise and readiness to them, whose destiny and lives are at stake don’t compromise, they burned the city and the ruin of the family nest, doing this, without hypocritical pity, and reflections. Coming from the departments and from the offices, the children of the intelligentsia was just as greedy, vain and arrogant, as eintelligence, but have never been sufficiently ruthless — ruthless personally, humanly. Palaces and planes pay for their humanism, it is a paradox that today few people understand, but tomorrow, perhaps he will explain to historians, what happened in Russia in this strange period in its history.

The rejection of the second term in 2011 was, it seems, is associated with the loyalty to Medvedev of this word: if Putin wants to return to the Kremlin, Medvedev must yield — it looked like the agreement in 2008. The reason for Putin’s return was dissatisfaction with the actions of Medvedev’s Pro-Western course, position on Libya, lack of attention to the security establishment, who in 2010 sold an external threat to any buyer who was ready to buy it.

But in 2017, it is not position and actions, and in the absence of both. Medvedev did not discourage the Minister Ulyukayev, showing that he has feelings of comradeship with his subordinates. Did not join in the work of the new economic strategy: the government has not been able to figure out how to make a new national project without money, sanctions and economic crisis. Even the story of the appointment of the Minister of economy passed by Medvedev: Oreshkina appointed not by a long casting of motivated candidates and a residual, the Prime Minister was shown that he this whole situation is not very interesting. Even the crisis ended (if ended) by itself, without special effort on the part of the Prime Minister.

Fatalism Medvedev, explained and understandable for someone who is already in its sixth year living political after-life, is unforgivable under the bizarre logic that is used today by the President of the country. Enthusiasm at the top of nowhere to take: Putin has done everything to discourage enthusiasts (reform, privatization, and so forth) desire to gush forth ideas and projects.

But the President, nevertheless, demands it, and the scene as it unfolds in the direction of those who are willing to display it. Yes, Vorobiev, Dyumin, Kadyrov little experience, although a lot of sins, but they play political games as if still able to enjoy them. Fatigue and frustration — is not in Vogue; in fashion — a fourth term, new horizons, high-sounding rhetoric and other signs of renewing the political landscape.

But this does not mean that Medvedev goes on stage. If the popular “sources” version superadam — however, it turns out that history can give Medvedev a chance. If tomorrow something really bad, the last nail on which to hang the project “Russia” will not be the KGB hook and not the state Duma and the constitutional court. Maybe that’s where the guest residences Psekhako and Plyos are a lover of fashionable costumes and gadgets, each of the businessmen and the lawyer Dmitry Medvedev will whisper stories in my ear the magic word that will save him played a biography for textbooks and future generations.