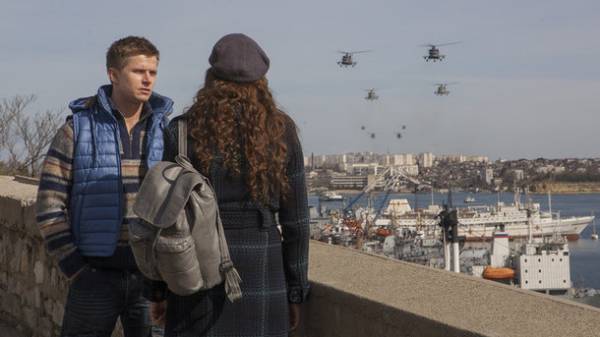 28 September saw the premiere of the propaganda film “the Crimea”, which is the first day of the hire made a lot of noise among the spectators, according to the magazine Maxim.

This tape starts with the landscape of the Crimea and meetings on the mountain top Ukrainian journalist and ex-special forces from Sevastopol, who had changed his profession and became a normal high school physical education teacher. Between the two tied the novel.

“Then they cut through the length and breadth of the Crimea on the beautiful yacht, well maintained roads in a jeep and knestout warm tube hotels. Judging by the movies, everywhere life is so juicy and beautiful that I can’t understand what is so bad lived residents of the Crimea under the Ukrainian yoke. Here the filmmakers made, of course, ideological mistake”, – the irony in the review.

Then the events of the film takes the viewer to Kyiv in the winter of 2014, where just is the midst of the revolution of Dignity advocate which and the participant becomes the main character propaganda tapes. However, her boyfriend does not approve of such a position, since on the Maidan there are his former colleagues in the special forces. The next part of the film is dedicated to the events of February 2014 in the Crimea and shows the “doomed” of the residents, who fear the outbreak of war.

“The strange thing is that both Russians and Crimeans, and possessed Bandera full movie speaks flawless Russian, as if it was not in those places spawn, no accent. This is again the fault of the filmmakers. Generally had the meaning of it all Ukrainians in the film duplicate in the German language, then it would be easier to understand where what the enemy. The filmmakers themselves are aware of this issue because it found the easy way out – all of our here – a beautiful, slender sun Aryans. And it’s not our slippery hypocritical fascists. So the whole film and fight Aryans with the Nazis,” added the authors of the opinion of Pro-tape, justifying the annexation of Crimea.

The final stage of the plot – the entry to the Peninsula by the Russian occupation forces, which so rejoices the local population.

It is noteworthy that the film “Crimea” was not taken seriously, not only journalists, but also ordinary spectators. So, according to TJ, the day of the start of the rental propaganda tapes became aware of the complaints of some users of the largest Russian-language website about movies “IMDb”, arguing that the rating of the standby picture is not true.