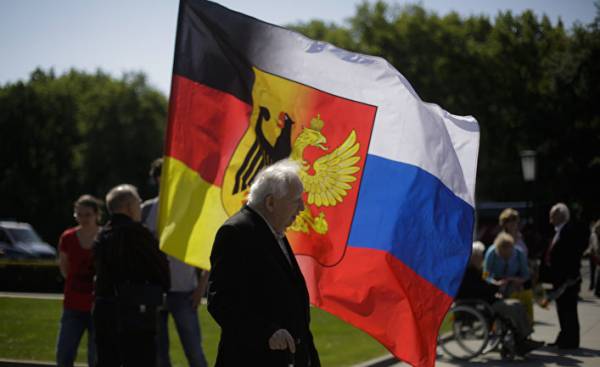 After the guest workers invited in the 1960-70th years, primarily from Turkey, the Russian Germans were the second largest group of migrants in Germany. Together with the so-called “contingent refugees” — Jews from the former Soviet Union — and simply living in Germany citizens of the former Soviet republics, they make up what is called “Russian” Germany.

For a long time this group of migrants were in Germany, as sociologists say, “defiantly nevidimaya” perceptible or imperceptible. No one paid any special attention to it. The situation changed after the story of last year allegedly abducted and raped refugees “girl: Liza” from the Berlin family of German immigrants. Noisy protests “Russian” Germany, hot Russian propaganda, has awakened increased interest in her academics and politicians.

As in Germany, Russian-speaking?

The number called different. With the filing of the Russian foreign Ministry at the beginning of zero years the press began to write about six million people in Germany who speak Russian language. Russia’s Ambassador to Germany put the figure at five million.

But this data is greatly inflated, said at the conference, which was held in Berlin on March 29-30, the Federal centre for political education (Bundeszentrale für politische Bildung, BPB), Professor Janis Panagiotidis (Jannis Panagiotidis) at the University of osnabrück.

According to his calculations, conducted on the basis of population census, live in Germany a total of about 3 million immigrants from the former Soviet Union — the Germans-immigrants, approximately 215 thousand Jews, and also wives or husbands of German citizens, students from Russia and the Russians, working on contracts. This number, however, included not only visiting families but also partially born children here, many of whom don’t speak the language.

If you leave in group of Russian-speakers just arrived in Germany for adults and children older than 10 years, according to the calculations of Panagiotidis, there are approximately 2 million people, and not all of them have German citizenship, and hence the right to elect or be elected. The German party, however, was not in the position to ignore this relatively small group of potential voters.

To pick them the key, you have to know who you are dealing with. The conference BPB in Berlin, along with representatives of a number of organizations themselves Russian-speaking residents of Germany were leaders of the German party.

The speakers drew a very detailed collective portrait of this group of voters. The famous German sociologist and researcher of migration Klaus bade (Bade Klaus), referring to the German immigrants, once called them “ethnopolitical”.

Among them is higher than the average in Germany, the unemployment rate and the share of living on welfare. Men are more likely than native Germans to work in factories, mills and construction sites. 20 percent of Russian-speaking women have a mini-bid of 450 euros, among the German women — 10%. The income per capita of the Russian-speaking family is two thirds of the average for Germany.

Young Germans immigrants more often than their indigenous peers, are going to serve in the army (in Germany abolished conscription). According to Panagiotidis, many of them not having recognized in Germany professional qualification or failed after school to find a place for pricehouse, the Bundeswehr appears to be the only opportunity to do some business.

Plus — a crisis of identity, more precisely, the dichotomy or, as expressed by Annette Schmitz (Anett Schmitz) from the University in Trier, the “hybrid identity” of the Russian Germans whose parents were brought to Germany as children or adolescents and who have ambivalent attitude as to the country of origin and the host country.

From time to time “Russian” Germany was politically passive. German resettlers immediately receive German citizenship, could participate in elections, but remained spectators. Affected by socialization in the Soviet Union where the party had one, and the elections are a sham.

Also, moved to Germany started from scratch. “We had no political connections or political dynasties, said at the conference, the President of the Association of Russian Germans, Eisenbraun Waldemar (Waldemar Eisenbraun). — Had to accustom on a new place, it was not until participation in politics.” Many, moreover, were idealized version of Germany, he added, saying that here, and so full of smart people, somehow we will manage. If voted, the Christian democratic Union (CDU).

Over time, Russian Germany began to recognize and define their own political interests. And they were very different. Not all of them expressed the Christian Democrats, which at first was essentially the only party in Germany, is paid at least some attention to the Russian Germans.

A couple of years ago this group of voters has been actively developed right populist “Alternative for Germany” (ADH). Now for the “Russian” Germany took the parliamentary parties, each of which attracted to its ranks someone of English speaking.

Four of them — the number of factions in the Bundestag — was at the Berlin conference, including Henry Tsertik (Heinrich Zertik) is the only member of the staff of German immigrants. He and the representatives of the competing parties — the Social democratic party of Germany (SPD), the Left party and the “Union-90″/”Green” — trying very hard to please potential voters.

They gave compliments, talked about the success of integration, loyalty and diligence of the Russian Germans, empathized with their problems and promised to defend their interests and put under the protection from the attacks of some German media. After the story “girl: Liza” of “Russian” Germany talked about as the fifth column of the Kremlin, wrote about the political promiscuity of IDPs and their susceptibility to the slogans of the right-wing populists.

However, we must be honest with ourselves, have “green” Sergey Lagodinsky. Among the Russian Germans, according to him, there really is not only the conservatives, but the supporters of right-wing radicals. At the same time, and the party should be honest with these people, not promise them the impossible.

“This is not what you want, many Russian Germans or Jews from the former Soviet Union, said Lagodinsky. — In Germany and will continue to be diversity, there will be refugees, will same-sex marriage, and in German schools — the lessons of sex education”.