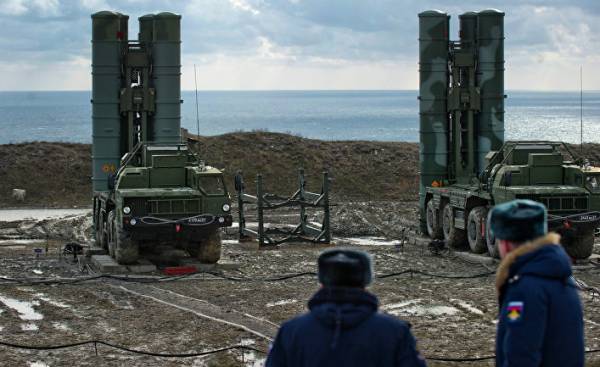 On Saturday, March 18, marks exactly three years since Crimea joined Russia. The Russians themselves would put it more precisely: Crimea returned — bearing in mind that in the last two and a half centuries (four times longer than Crimea has been with Ukraine) Peninsula was part of Russia. If to be more exact, since the collapse of the Soviet Union Crimea, predominantly Russian, in fact, never submit to Kiev, because always defended its autonomy. In the same way he was treated in Soviet times. Even in 1954, when Nikita Khrushchev gave the Peninsula to his native Ukraine, a strategically important port of Sevastopol was a city pocinovice directly to Moscow. After 1991, Russia and Ukraine together ruled the Sevastopol, and it was financed from funds of Russian Federal budget.

For decades, the citizens of the Crimea complained that Kiev’s neglecting them in economic terms, and considered this a punishment for their Pro-Russian sentiments. And here on March 16, 2014 the residents of Crimea have expressed their sentiments: 96.77% of Crimeans voted to return to the Russian Federation. Today, the average salary in the Crimea is three times higher than Ukrainian. Built Kerch bridge length of 19 kilometers, which is the longest in Russia and will connect the mainland with the Crimea. And although Crimea is living under Western sanctions, many foreign investors do not leave it caution: some already are finding ways to invest in tourist and other capacities, while others reserved their position, waiting for the embargo to be lifted.

For Russia, the status discussion is over

In the last days of the three-year anniversary of the return of the Crimea were the main news in all Russian media. Remember the deeds of Russian special forces who have occupied strategic objects and territories quickly and without casualties, but is also skilled in the neutralization of the aggressive factor of the Tatar and the Ukrainian far right, which has United thousands of its supporters in the battle group. For example, on 20 February 2014 was the Korsun pogrom, when Ukrainian radicals stopped eight buses with the residents of the Crimea, returning from Kiev. Seven unarmed people were killed in a fierce game in which they had a few minutes to run across the field. On it people were chasing the lead jeeps and with machine guns. Those who are “lucky”, soon beaten, made to kneel and forced to sing the Ukrainian national anthem.

After three days in the Crimea, there was rebellion. Tens of thousands of people took to the streets under the leadership of Pro-Russian activists and anti-fascist organizations “Russian block”, “Russian unity” and “Russian community of Crimea”. The self-defense units of Crimea were against maydanovskih groups, reinforced by Crimean Tatars. There was a first shooting. Then intervened the Russian special forces in uniforms without insignia, and the situation was brought under control. After the referendum of 16 March and the subsequent signing of the accession Treaty of Crimea into Russia process was completed on 21 March the official statement in the Russian Parliament and amending the Constitution. On the same day, President Vladimir Putin signed the relevant law, and since Russia a conversation on the status of Crimea is complete.

In a historical perspective it is now interesting other issues. For example, if the return of the Crimea “spontaneous” and unexpected even for the Kremlin as it is usually presented, or was implemented before the scheme. Experts will long debate on this subject, but the fact is that in recent days, Russian media noted that “just a month before Kiev broke out in the Maidan, it was hard to imagine that soon the Crimea reunited with Russia.”

And yet it’s hard to believe, because the readers of our magazine have had the opportunity to see the possible scenario, which, incidentally, subsequently realized, back in October 2013, i.e. a few months before they “broke the square”. Definitely, it was not a big surprise for those who closely followed the events in Ukraine, because the Ukrainian revolution hid the confrontation between Russia and the United States around the control, primarily over the Crimea and a vital port — Sevastopol. As in the past, the Russian paid for the Crimea two millions of lives, it is clear that today there is no price they wouldn’t pay to prevent NATO to take over the Sevastopol.

“Print” of the predicted events

Then, on October 18, 2013 (“Print” No. 290), almost four months before the revolution in Kiev has entered its final phase, we warned of the impending war and published an article entitled “Ukraine can join NATO, but without the Crimea”. It was a month before the start of the moderate Pro-European protests against Yanukovych, who in late November of that year, suddenly announced a political turn and say that we need “the pause in European integration”. At that time the scenario of this article might seem science fiction, but from the perspective of the present, especially if to remember everything that happened during this time, it will be useful to recall some main points of our text. Then we wrote that “a victim of the Ukrainian European integration can become a Big agreement between Kiev and Moscow, from 1997, in which Russia recognized the borders of its neighbour and within the Peninsula of the Crimea, and the strategically important port of Sevastopol.”

“All of a sudden the Euro-Atlantic forces intensified, and the whole problem takes on a geopolitical scale, threatening the very serious potential consequences. As in the case of Georgia, Ukraine’s entry into NATO would be Russia’s geo-strategic disaster, which is the largest country in the world can afford, unless you want yourself to throw the noose on the neck… of Course, Washington was not interested in how Euro-Atlantic integration of Kiev will affect the Ukrainian society and the state. According to the logic of “while they serve a purpose, they need” us strategists immerse Ukrainians deeper into an economic abyss and internal friction,” wrote we then. And it was true, because for the last three years, the average wages in Ukraine decreased from 350 to 150 Euro.

We predicted that if Ukraine will sign an Association Agreement with Brussels, it could mean a complete political rupture in Russian-Ukrainian relations: “Moscow simply no longer will have no other option but to enter into direct confrontation with the West. And he this time, unfortunately, guessed in the guise of brotherly Ukraine”.

“Moscow has already announced the harsh economic measures that will be taken against Kiev. And this can be a key incentive for the orientation of Ukraine to membership in NATO. Before Yanukovych stressed that his country cannot enter NATO, because a large part of the population does not support this idea. However, if Moscow will be forced to launch an economic blockade due to which many Ukrainian companies will be in a difficult position, this will lead to increased anti-Russian sentiment. In this situation, the majority of citizens can vote in the referendum for joining NATO,” we wrote in October 2013. Is it a coincidence that the current President of Ukraine Petro Poroshenko recently again raised questions about the country’s membership in NATO? Brought whether the difficult economic situation, backed up by the state propaganda against Putin, the Ukrainian citizens to the necessary degree of anti-Russian sentiment?

But let’s read another warning, published in October 2013, which, as it seems, in Kiev is not taken seriously even now: “the maths of this is well understood in Moscow and in the West. Therefore for Russia it was extremely important to prevent the entry of Ukraine in free trade zone of the European Union. Since Russia is apparently not very good at it, now Kiev and Moscow will have a difficult road ahead. Because Putin’s Russia, of course, will not feed nor Brussels ally of Yanukovych, nor any other Pro-Western oriented government in Ukraine. Given that at the time Yanukovych softly rejected Russian offer to join the Eurasian Union, which would bring Ukraine up to ten billion dollars of net income a year, and gave preference to the EU, now Yanukovych will have to deal with very serious economic, and political consequences. However, the most serious consequences will be felt later.”

In the end, we have proposed a scenario of separation of Crimea and Donbas. “Given that Russia believes the Treaty between Brussels and Kiev, clearly against her interests, a victim of Ukrainian European integration may be just a Big contract. And the most important section concerns the recognition by Moscow of the Ukrainian border, but inside her the Crimea and the strategically important port of Sevastopol, home to mostly Pro-Russian-minded people, who enjoy autonomy and almost do not recognize Central government in Kiev. If this agreement should expire, it is likely that Crimea will be enough small spark in order to declare a greater degree of autonomy, and then to separate. It is not excluded that Crimea will and other Pro-Russian Eastern regions of Ukraine. Then Kiev will have to intervene to prevent the collapse of the country, but Moscow could intervene to defend the 17 million Russians living in Ukraine. In the case of such an unwanted scenario the collapse of Ukraine could be prevented only with great difficulty. It is no coincidence, by the way, Putin said a few years ago that “half of Ukraine is Russia”.

Washington should forget about Crimea

It turned out that “small spark” that triggered the bloody breakup of the Ukraine, was a coup in Kiev. If the readers of “Printing” knew everything before it happened, and in the West, this scenario was obviously well known. The goal was to strike Russia where it would hurt the most, and to take Sevastopol. Washington was well aware of what kind of accident provokes, supporting extremists in Ukraine. But Moscow had prepared a list of retaliatory measures, including the rejection of the Crimea and the Donbass, in case the West starts military offensive in Ukraine. There is no doubt that through diplomatic channels the Kremlin has warned Americans of the dire consequences. There is no doubt that Washington’s plan was: first, to provoke a crisis, and then accuse Russia of “violation of international law” and enter it in isolation.

Today all too clearly. If the President, Donald trump will not change policy towards Russia, have serious problems, and not only in Ukraine. Russia will not give up the slack, because there’s nowhere to retreat, as NATO approached the borders. First you need to Washington have forgotten about the Crimea and Ukraine as a testing ground for the realization of its geopolitical ambitions. There are favorable signs de-escalation of tensions in Russian-American relations, but the danger will persist as long as US policy will not change radically.

The number of cases COVID-19 in Ukraine has decreased