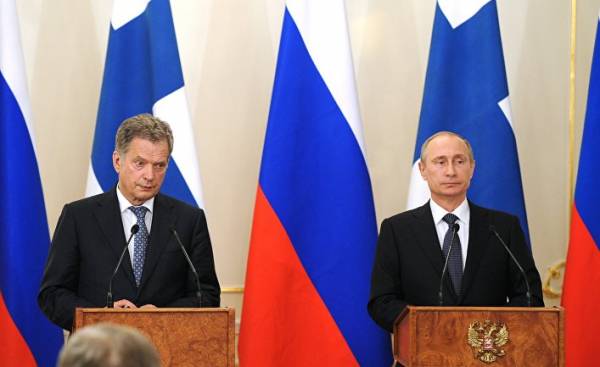 Earlier Russia constantly interfered in the presidential elections of Finland, but things are different now. Helsingin Sanomat journalist unto hämäläinen (Hämäläinen Unto) believes that Putin, who will arrive in Finland on July 27, will keep the “promise of Yeltsin.”

On 27 July the President of Russia Vladimir Putin will come to Finland to congratulate the country with the centenary of independence. Putin arrives at an interesting time for the country: before the presidential election is six months, and the current President is Sauli Niinistö (Sauli Niinistö) is planning to run for a second term.

Of course, Putin is interested in who becomes the next President of Finland — because he wants to stay President of Russia until 2024.

The cooperation of the presidents especially strengthened after Russia seized the Crimea, and the EU countries — including Finland — imposed sanctions.

In accordance with the line of the EU, the Finnish government reduced the number of contacts with the Russian government. President Niinistö however, almost never changed his strategy of communication with the President of Russia.

The government of Finland is not ydilo action Niinistö, because relations with Russia are included in the scope of powers of the President.

In addition, for many decades in Finland have become accustomed to what the President focuses on developing relations with its Eastern neighbor.

During the cold war even used to the fact that the Soviet Union could, for the sake of maintaining good bilateral relations is to intervene in the presidential elections in Finland.

Vladimirov worked in the Russian Embassy in Helsinki and watched to regulations of Moscow was observed. Kekkonen was elected President five times, and each time, Moscow supported him, both overtly and behind the scenes.

“If it were possible, I would ask that when counting votes, your votes would add another 150 million votes of Soviet citizens”, — jokingly said the Prime Minister Alexei Kosygin and Kekkonen before the election in 1978.

Until the Russians broke the promise given to Yeltsin. Russia never openly interfered in the presidential elections of Finland, which was conducted in 1994, 2000, 2006 and 2012.

Information about the fact that Russian politicians or diplomats secretly tried to influence the outcome of the election of the President of Finland, no.

Thus, Finland had passed the fate of the United States, of meddling in the election of the President which I suspect Russia.

How events will develop now? Can formidable neighbor to hold back and to stay away from the Finnish elections?

I think I can.

Putin knows Finland and Finns a very long time. Of course, he understands that if a Finnish candidate will earn the reputation of a favourite of Russia, he will lose for sure.