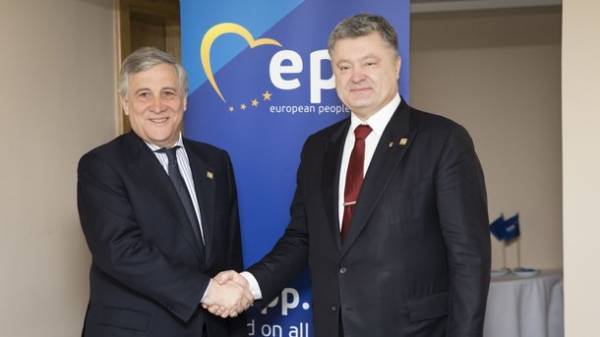 “The head of state expressed hope for a positive vote by the European Parliament decision on the introduction of the EU visa-free regime for Ukrainian citizens at the next plenary session of 6 April 2017”, – stated in the message.

It is also noted that Petro Poroshenko informed the President of the European Parliament on the situation in the Donbass, in particular about provocative actions of Russia, which undermine the peace process and further implementation of the Minsk agreements.

“Petro Poroshenko emphasized the importance of maintaining and strengthening the sanctions regime against Russia to restore Ukraine’s territorial integrity, including Crimea. The President invited Tajani to visit Ukraine”, – stated in the message.

Earlier it was reported that the President of Ukraine Petro Poroshenko and European Council President Donald Tusk discussed the latest events in the Donbas and condemned Russia’s actions aimed at violation of the Minsk agreements and undermine the peace process.