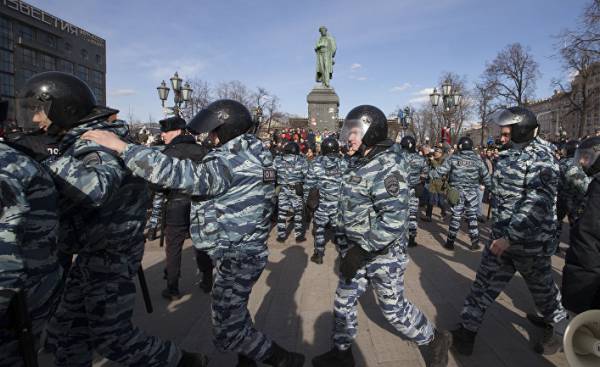 Sunday, March 26, in Moscow, it was a Sunny spring day, cool but clear, and by the time I got to Tverskaya street, the sidewalks are already filled with people, marching in the direction of Pushkin square and the red square and the Kremlin towers. They came out to the protest led by Alexei Navalny, the most sophisticated and the most popular opposition politician in Russia, who declared the day a national day against corruption. Their protest gathered was expressed rather simply with his presence than some specific action: a few people were holding placards, from time to time from different sides could be heard the slogans, but the main expression of the political position of people became their presence.

The formal reason for the demonstrations in Moscow and other cities were evidence of corruption has long lost its influence, Prime Minister Dmitry Medvedev, which Navalny and his aides published in the Internet. Earlier in March, Navalny published a report in which he spoke about the many residences Medvedev, his luxury boats and other expensive things that Medvedev has managed to amass over the years and which are partly paid by the Russian oligarchs through phony charities. However, the Sunday demonstrations were also evidence of the increasing sense of fatigue and discontent in Russian society, a sense that after 17 years in the political system Vladimir Putin has run out of arguments to justify its monopoly on power. Corruption in official circles was much more compelling reason for entering the protest than the protection of civil liberties and the fight against fraud in the election. We are talking not so much about some abstract political freedoms as the humiliation experienced by the ordinary people discovered that their Prime Minister, acquired a vineyard in Tuscany, while the real incomes of Russians fell to an average of 12% in 2014.

Moscow city hall has not approved the route of the demonstration — she invited the organizers to use one of the parks located outside the city centre and warned that it will not be held responsible for any possible negative consequences of an unauthorized demonstration. However, this warning failed to scare people away. On Tverskaya, it was quite difficult to estimate the size of the assembled crowd, but it’s safe to say that there came a few thousand people. The reaction of the authorities was chaotic and inconsistent. The vast majority of participants freely walked in the street for hours. However, Navalny — who had a pair of Nike sneakers, which he wanted to focus on one of his accusations against Medvedev, who, according to the opposition leader, used a front company headed by a loyal man to buy a pair of sneakers — the police arrested a few minutes after his arrival.

Near Central Telegraph office, where I stood, people passing by, without encountering on its way any obstacles, but at Pushkin square, the Riot police in black body armor and helmets arrested several dozen people, previously beating them. By the end of the day in Moscow were detained about a thousand people — far more than in 2011 and 2012, when the city held demonstrations on such a scale. The police even arrested a reporter for the Guardian newspaper he was taken to the police station and he was charged with holding an unauthorized rally.

I was amazed at how many young people joined the protest March. During the previous wave of massive demonstrations in Moscow in the actions were involved mostly middle-class capital — educated professionals, which was a little over 20, over 30 and over 40. This Sunday caught my eye the presence of many students. “On actions against corruption on March 26, there were many students — has never so massively on opposition rallies and marches that they had not abandoned,” wrote the independent news site Meduza, which employs some of the best Russian journalists. “A teenager is easy enough to feel a sense of envy, uncertainty, innuendo and out and try to do something,” said 17-year-old Constantine, explaining why he came to this demonstration.

Commenting on the consistently high approval rating of Putin, many analysts and journalists indicate that the vast majority of Russians get their news through state-controlled television. Young Russians are much less likely to pay attention to the state-controlled television, and the impression that the Kremlin is not yet reliable tools for the impact of this demographic stratum, not to mention their political views. Even Life News, a Pro-Kremlin website, has been forced to recognize this new reality. In his article published on Monday, March 27, titled “television, goodbye,” the columnist admits that “television, but rather focused on age, even the elderly part of the population completely missed the active and young audience”. From the author’s perspective, Sunday’s protests are “very worrying and a serious Wake-up call” for Kremlin officials. “TV fails, and its inefficiency as a massive “agitator and organizer” will only increase”.

Russian youth can be called truly “Putin” generation: those young people who are less than 25 years old, simply do not remember other Russian leaders. However, the same thing happened in the perestroika period of the 1980-ies the authorities, apparently, have lost their influence on young people and no longer speak their language. Two weeks ago, the network appeared the rather remarkable video interviews of students and Director of one of schools of Bryansk, a provincial city located 300 kilometers from Moscow. High school students read a lecture after one of them invited his classmates to come to an anti-corruption protest in Bryansk.

The tone of the school principal was threatening and angry. “What he does is pure provocation, you know? You still don’t understand this,” she tells the teenagers. They object to her. One of them says: “because of the Crimea that we have selected”. On the evidence of the presence of Russian troops in the East of Ukraine: “Videos go, you know.” The dispute between the Director and the teenagers comes full circle: the Director is trying to scare them with the prospect of civil war and unrest, and students respond to her with talk about “justice”, which they understand as life, “when the government cares about people, about ordinary citizens, but not about their millions”. Losing patience, the Director asks, did Putin and Medvedev teenage life worse. No, answers one of them, but “they just sat”. Neither side has failed to convince its opponents, but the statements of the teenagers sound more confidently and sensibly. The Director’s voice sounded notes of disorientation, dissatisfaction that she is behind the times and can no longer easily use the power that she had before.

The geographical diversity of Sunday’s protests caused the Kremlin is not less trouble than their demographic composition. Different largest demonstrations in nearly 100 Russian cities, including those cities where five years ago, during the previous wave of anti-Kremlin protests, no rallies. Couple of hundred people took to the streets in Nizhny Tagil, an industrial city in the Urals, where in 2011 the workers of the factories have stated their intention to come to Moscow and to apply force against participants of anti-Putin demonstrations if necessary. More than 150 people were detained in Makhachkala, the capital of the Republic of Dagestan, where elections in 2012, Putin received more than 90% of the votes. It became clear that the Kremlin did not expect to see anti-government activity in these regions and that it gave local authorities clear instructions on this. As a result, in some cities, protesters had not been touched, whereas in other cities they are brutally dispersed. In particular, the authorities of Omsk dispersed the crowd in the center of the city people snow machines.

These demonstrations have also been associated with the political ambitions of the Bulk. He has already declared its intention to participate in presidential elections next year, although a year ago against Navalny was opened a criminal case on charges of fraud, which, if the authorities decide to bring it to the end, can deprive the opposition of the right to participate in elections — a kind of grey area which the Kremlin likes to keep Russian opposition. However, the Sunday demonstrations have forced the Kremlin to take a more defensive position or at least to look for new ideas that can improve the degree of legitimacy of such a regime like the Putin regime in the eyes of the people.

At the heart of all presidential terms of Putin was the different concept. His first term began in 2000, was centered around the restoration of the authority of the state, and the arrangements and the necessary level of competence in government. His second term lasted from 2004 to 2008, was devoted to a gigantic redistribution of income from the sale of oil and gas, which formed the basis for the consumer boom and allowed the government to enlist the support of the population. And since 2012, when Putin returned to the presidency after four years as Prime Minister, he first focused on the confrontation between Russia and the West, which is unfolding in Ukraine and Syria, and which is based on Russia’s desire to restore its status as a great power and an influential player on the world stage.

Now that the General election is a year, it is unclear what arguments or what kind of deal Putin is preparing to offer the Russian people in his fourth and apparently final term. The Patriotic upsurge that began after the annexation of Crimea, and gradually begins to subside. Russia’s military operation in Syria is even less effective instrument of propaganda. Putin and his political advisors are no convincing answer to the populist and non-ideological anti-corruption message to the Bulk. This does not mean that Navalny actually could be Putin’s threat to vote. In 2013, Navalny lost the election of the mayor of Moscow, receiving 27% of votes is quite an impressive achievement considering the many obstacles it faced, but it is also his ceiling. The results of a survey recently conducted by an independent “Levada center” showed that the proportion of Russians who would vote for him in the presidential election is now about 10% against 33% in 2011. In the end, almost full control of Putin over the election commissions, legislative bodies at the local level and courts at all levels means that his regime is not threatened.

Bulk true talent lies in his ability to expose the weaknesses of the system and put her in an extremely awkward position. Last week, when unidentified Pro-Kremlin activists pelted Bulk balls with green paint during the rally, he managed to turn his face stained in a popular meme. Sunday’s demonstration was indeed very successful — not least because the Kremlin was not ready for them. They awakened the sense of possibility in campaign Bulk, if it will give the chance to continue. Monday, March 27, a Moscow court sentenced Navalny to 15 days of arrest for disobedience to the orders of the police — perhaps the Kremlin wants to use this time to rethink its strategy against Navalny and decide what to do next. However, even if Putin will find a way to deal with the Bulk in front of him will still be much more difficult question: how long a mixture of inertia, stability and fear of the unknown will allow him to remain popular among Russians? And if this policy mix will suddenly cease to operate, what he can offer the Russian people? While he has the opportunity to defer the answers to these questions, but he can’t postpone them forever.