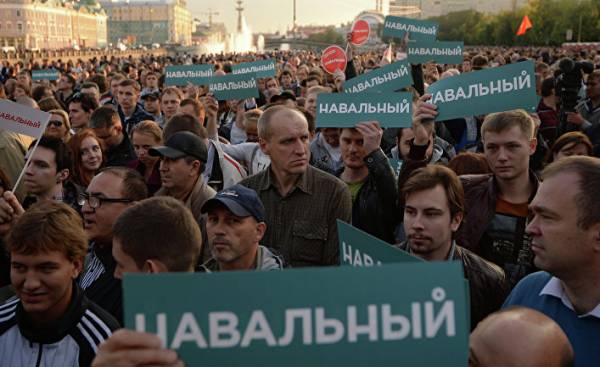 The young developer has created an application that needs to allow human rights defenders to track the whereabouts of the detainees, the demonstrations of the people.

In Russia the season began demonstrations? In any case, they follow one another, albeit for different reasons: corruption, road tax, the demolition of houses in Moscow, salvation is St. Isaac’s Cathedral in Saint Petersburg…

The number of detentions is also growing. In response it created a new app for smartphones “Red button” that allows the defenders to locate the person. Interest has already been expressed in Venezuela, Turkey, Belarus and Ukraine.

The author of the innovative solutions was the company of a young Russian programmer Alexander Litreeva: he’s only 21 but he has already many years of experience.

“Red button” is a coordinator who provides information to the defenders about where you took across Russia, — he said. — It is enough to register”. You enter your name, email address and phone number on which you receive confirmation. Then there is a big red button. Single tap is enough.

According to the Creator, the just-released app has installed approximately 5 thousand 500 people. 74 have used it on 29 April during the demonstration, “Tired”, which was organized by the opposition movement of former oligarch Mikhail Khodorkovsky “Open Russia”. That day in St. Petersburg detained about 100 protesters.

The idea came March 26, when thousands of people across Russia took to the streets at the call of opposition leader Alexei Navalny, who released the acclaimed live on corruption, Prime Minister Dmitry Medvedev.

That evening to the Association “OVD-info”, which deals with calculation of the detained participants of demonstrations, was simply not to call: in Moscow police arrested more than a thousand people, a real record.

The record for the post-Soviet era

“OVD-info”, as usual, write down all the names. When man is taken, they call us to tell us how they are, and what happens to them. We keep in touch to the office, where would you take them, sometimes even before the trial,” says one of the founders of the Association Daniel Beilinson.

“But on 26 March it was very difficult because we set a record for peaceful demonstrations in the post-Soviet period, he continues. — In addition, we were target of a DDoS attack, which greatly disturbed us”. “The information came from all sides, was complete chaos. Therefore, a need for centralization,” says published on the Association Alexander Litreyev.

Demonstrators (most of them were released after a few hours) were taken to different police stations. One in the list of “OVD-info” was not. Since then, there have been a number of convictions: eight months of a colony Yury Kuliyā for “assault” on a police officer, a year and a half to the joiner Alexander Shpakova. They both pleaded guilty, hoping for leniency of the court.

Association “OVD-info” was formed in December 2011 amid mass demonstrations against the re-election of Vladimir Putin in the winter of 2011-2012. “The day after the vote, December 5, Chistye Prudy had to go to the authorities permitted a large collection, says Daniel Beilinson. But when people began to gather in the metro, many of them were detained. They did not understand the procedures, and relatives had no idea where to find them…”

The application is of interest in Venezuela

Judgement in the case of the “Swamp” was harsh. Alexei Polikhovich was 21 years old when he was sent for three years and three months in the colony. “After prison I became angrier and more serious” — without visible emotion says this young man with a shaved head and small beard. He now works in the “OVD-info”.

The Association, created on the collected together 2 million rubles, employs seven permanent staff members — all of them young. In less than five years of work she gained respect. Presented data is not questioned. The author of this innovation has appealed from Venezuela and other countries, which want to adopt this method.

She is in the building “Memorial” and receives support from the International Federation for human rights and the European Commission. She works with a network of human rights defenders and legal experts, which forwards those who seek help are not associated with large organizations of lawyers.

Using the “red button” observers are preparing for the national holiday on June 12, which opposition leader Alexei Navalny has planned a large demonstration.

The main oppositionist of the President again called on citizens to take to the streets. Vladimir Putin, in turn, have used the pretext of the confederations Cup (prelude to the 2018 world Cup) and the decree forbade the holding of any meetings from 1 to 17 June.