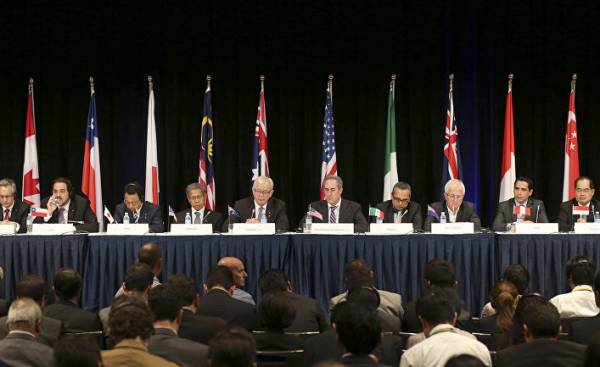 Last week in viña del Mar (Chile) the meeting of Ministers of foreign Affairs and external trade of the countries of the TRANS-Pacific partnership (TPP) and China. The event was held at the initiative of Chile — States, which this year holds the presidency temporarily in the organization. Agreement on the establishment of the TRANS-Pacific partnership signed in February 2016 12 countries in the Asia-Pacific region (Canada, Mexico, Peru, Chile, Japan, Malaysia, Brunei, Singapore, Vietnam, Australia, New Zealand and the USA).

However, in January of 2017 who came to power the US President Donald trump has signed a decree on the withdrawal from the agreement on the TRANS-Pacific partnership.

The US withdrawal from the TTP and the ongoing trump the isolationist policy will surely weaken America’s position in the world.

Trump called the TPP a “potential disaster” for the United States and declared that this Covenant is extremely disadvantageous for Washington.

The US withdrawal from the TRANS-Pacific partnership does not prevent other countries to move forward in search of new trade alliances. It should be noted that China despite the fact that is not a member of TTP, took an active part in the forum. While the administration of Donald trump decided not to send to Chile a high-level representative, Beijing sent in Vina del Mar special envoy of the Chinese government on issues of Latin America In Hamina (Yin Hengmin).

The Minister of foreign Affairs of Chile, Heraldo muñoz (Heraldo Muñoz) a few weeks ago told me that, despite the US withdrawal from the TRANS-Pacific partnership, Latin America will strive to expand trade relations with the United States. China can take advantage of the situation for increasing trade and economic presence in the region. “A Holy place is never empty”, — said the Minister of foreign Affairs of Chile.

After the Congress of Ministers of foreign Affairs and external trade of the countries of the TRANS-Pacific partnership, I met again with Munoz, and he told me that it is not necessary
to exaggerate the importance of your presence at the forum of China. Following the talks, the countries of Latin America decided to continue to follow the path of free trade and integration in Asia and the Pacific.

Mexico, Colombia, Peru and Chile, members of the Pacific Alliance, decided to look for new ways to establish trade relations with countries outside the region — in the first place such as Australia and New Zealand.

“As for our relations with China and the US, here we should pursue a policy of equal relations. The growing influence in the region, Washington or Beijing, we must use in our national interest,” said Heraldo muñoz.

The decision of trump on the exit from the TRANS-Pacific partnership is just one of the measures of the new policy of the White house administration to strengthen the United States as a powerful state, not as the Foundation of a “world Empire” that emerged after the Second world war.

Here are just some examples of the new policy of Washington.

Trump announced the revision of the Treaty on free trade in North America, issued a decree on the construction of a protective wall on the border of USA and Mexico. This is done despite the fact that according to official data, 66% of immigrants come to America not through the land border of the United States with Mexico and by air as tourists and then remain illegally in the country.

Last week, trump sent Congress a draft budget of the U.S. for 2018, in which foreign aid was reduced by 29% while funding the Pentagon, according to plan, will increase by 10%. In addition, sharply reduced the funding programs of the UN and the world Bank and the fight against global warming.

Meeting in viña del Mar have shown that even countries such as Chile, Peru, Colombia and Mexico, have traditionally focused on the United States, after coming to power, trump forced to look for ways to create new trade unions. American diplomacy will gradually lose its influence in the world. Xenophobic rhetoric trump can cause the coming to power of a new wave of populist politicians in Latin America, in particular — in the upcoming 2018 presidential election in Mexico, as well as to push Latin American countries into the arms of China.