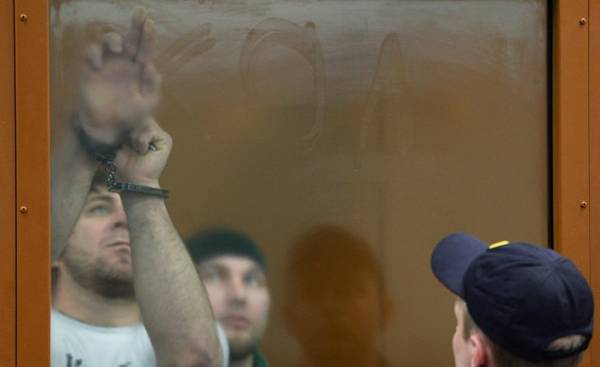 During the sentencing one of the defendants wrote the word “lies” on the sweaty glass of the aquarium, which houses defendants. “I am not guilty of this crime. I do not bow to anyone, nor to Krasnov or FSB,” said the perpetrator. The family’s lawyer Nemtsov believes that real customers need to look at the environment of the head of Chechnya, Ramzan Kadyrov.

Five Chechens convicted of the murder of Boris Nemtsov, were sentenced to 11 and 20 years. The investigation, however, failed to establish who ordered the crime.

Moscow military district court sentenced five Chechens to 11 and 20 years imprisonment for the murder of opposition leader Boris Nemtsov. The investigation, however, failed to establish who ordered the crime. Zaur Dadayev, who four times has shot at the opponent of Vladimir Putin, was sentenced to 20 years imprisonment, and his accomplices, natives of Chechnya and Ingushetia, to 11 and 19 years of a colony of a strict mode. Unlike regular colonies, the colony mean reduced quantity of walks, visits to relatives and limit correspondence. The Prosecutor requested life sentences for Dadaeva.

The main part of the trial took place on 29 June, when, after long and painful deliberations, the jury convicted pleaded guilty. All the accused denied his involvement in the murder, and three of them stated that they had been tortured.

Customers still out there

On Thursday, at the time of sentencing one of the defendants wrote the word “lies” on the sweaty glass of the so-called aquarium, which houses defendants. “Allah asks patience, I will ask for patience, I am not guilty of this crime. By the will of God I walk this path properly, I do not bow to anyone, nor to Krasnov or FSB,” said the killer.

The real customers of the murder have not been found. The family’s lawyer Nemtsov believes that they need to look in the entourage of the head of Chechnya, Ramzan Kadyrov, a staunch ally of Vladimir Putin, which is also suspect. Among the suspects is Ruslan Eremeev, a former Deputy commander of the battalion “North”, responsible for personal protection of Kadyrov. He was never questioned, and the police did not go beyond the threshold of his home. A second suspect, Ruslan mukhutdinov, recognized in December 2015, an alleged customer of a crime, is still wanted by police.

The family’s lawyer Nemtsov called the investigation “a complete fiasco”.