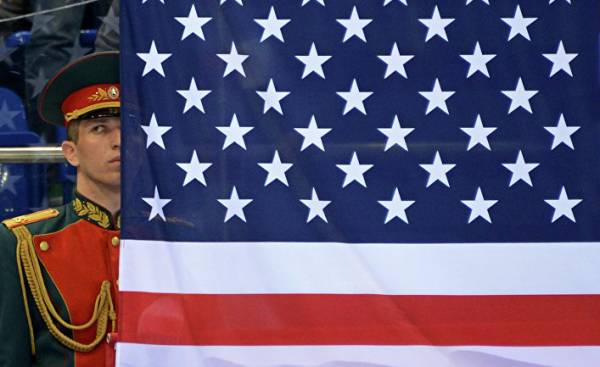 Hostility to Russia — the oldest and enduring foreign policy tradition in the United States. And the reason for this is that, besides the usual conflicts of interest that may arise between two very large countries the basis of the hostility of America against Russian lies and philosophical conflict that fueled her hostility for centuries, what has jeopardized the fate of the world. Alexis de Tocqueville (Alexis de Tocqueville) gave a definition of this phenomenon on the last page of the first volume of his treatise “Democracy in America” published in 1835. America, he explains, wins by the plough the laborer, and Russia — by the sword of a soldier. In America to achieve the objectives rely on personal interest and give full play the power and mind of man. In Russia all power companies concentrated in the hands of one person. In one country the basis is freedom and the other slavery.

In our era, we sometimes think that the conflict of America with Russia was a phenomenon of the cold war. However, it lasts forever. It is a struggle of democracy against tsarism, even if in a few years the tsarist government and called themselves communism.

You should accept that for many centuries, America has almost always created sinister alliances with all sorts of dictatorships around the world for the sake of momentary benefit and there is a strategic need. Franklin Roosevelt (Franklin Roosevelt) even concluded at some time a Union with Russia itself — clearly for the benefit of the military question. But these opportunistic alliances are always hiding a more serious conflict with Russia, the eternal conflict between two philosophies — liberal and oppressive. The collapse of communism and the end of the cold war, since 1989, was from the point of view of liberal America exciting events. And not just because of the fact that it was a joy to observe how the collapse of the Communist dictatorship, but also due to the fact that without the threat from the Soviet Union, America is finally free to abandon the habit to enter into opportunistic alliances with various dictatorial States.

America could now freely speak in support of liberal movements throughout the world. Or so for several years it seemed. And even then, when the innocence of those first years after the end of the cold war was evident, even when Russia began to revive another kind of the tsarist and dictatorial regimes and terrorist army in other parts of the world was stronger than it seemed — even then we Americans could be sure that our centuries-old liberal mission remains unchanged. And it is our duty and our honor and purpose still are, to support and to protect the liberals around the world to counteract their enemies — that is, above all, Russia.

That is why the current decision of the Republican party (adopted at the very top) to speak in support of Vladimir Putin seems so shocking. All American history, it would seem, suggests that such a change of course is unacceptable. However, this is what happens. More serious violations of the American tradition and can not be. President Barack Obama likes to say that Ronald Reagan (Ronald Reagan) must be turning over in his grave, which is undoubtedly so. But Tocqueville is also rolling in his grave that much more significantly. This is a turning point in American civilization. And no, this process will not stop. Senator John McCain (John McCain was) have just been in Kiev urging Ukrainian soldiers to fight to the death with their Russian enemies. But McCain last year more often “quietly” support the only in American history, presidential candidate from the main party that supports these Russian enemies. And if the question of consistent opposition premonarchical turn in American politics you cannot even count on John McCain, then who else can you count on? Sure, not Chuck Schumer (Chuck Schumer). This means that the turning point came, the sudden surrender, the unexpected new Chapter in “Democracy in America”.