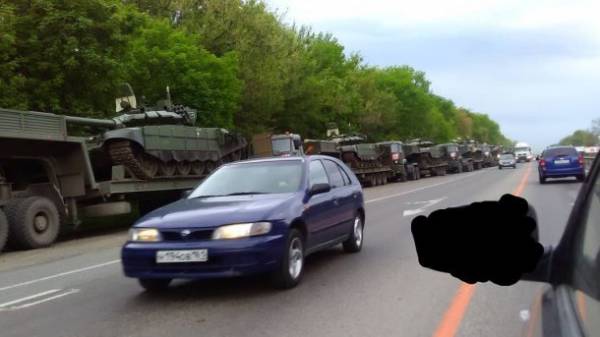 In the Rostov region on the video recorded the movement of Russian military equipment, in particular more than 15 tanks. The corresponding video published by one Twitter user.

It is noted that the recorded Russian tanks yesterday, may 14.

In the caption to the video suggested that military equipment with a parade moving in point of a constant dislocation.

It is noted that the transfer of technology occurred 30 to 50 kilometers from the Ukrainian border.

14.05.2017 M4 North direction before reaching 5..6 km to a fork on the road #holo #tank*and with a parade in #Rostov going to the point of dislocation pic.twitter.com/hblZuwyY3C

We will remind, recently the experts of the international group Bellingcat discovered in the Donbass participation in the fighting the most powerful Russian tank Russian T-90A.