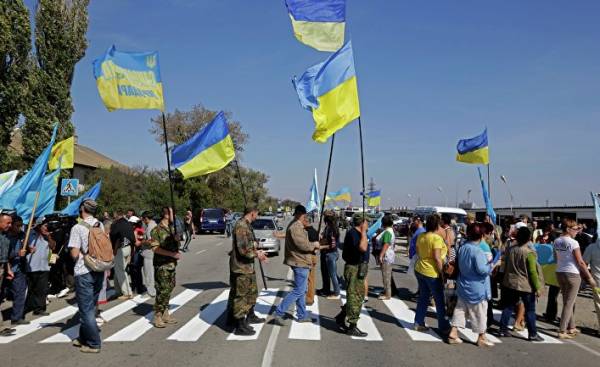 Exactly three years ago, the Russian Parliament finalized the annexation of Crimea by ratifying the so-called “Agreement on the adoption of Crimea in structure of Russia”. Ukraine and the world did not recognize the occupation of the Crimean Peninsula, against the Kremlin were introduced economic sanctions. But in fact Ukrainian territory is under the full control of the Russian Federation. What’s more, it actually turned it into a military base. Just these days in the occupied Crimea began exercises with the participation of airborne troops of the Russian Federation and the black sea fleet and Air and space forces.

Russia works not only in military terms. Attempts to completely “swallow” the Peninsula are made in other areas. In the information and the humanitarian sphere, the Crimea also is under the full cap — only the Russian media, but Russian schools, only Russian history. For example, in the Livadia Palace on the days of the first meeting of the so-called integration Committee “Russia — Donbass”, where in particular was attended by the heads of the terrorist organizations “DNR” and “LNR” Alexander Zakharchenko and Igor Carpentry. They arrived in the Crimea on the celebration of the 3rd anniversary of the annexation of the Peninsula. According to the participants, the created structure will be engaged “the integration of Donbas into the Russian Federation”.

Everything that concerns the Ukrainian or Crimean Tatar — in Crimea severely oppressed. Literally on Monday the court annexed Crimea began its consideration of the merits of the case against a Ukrainian journalist Nicholas Semeny. Against which Russian authorities have opened a criminal case on suspicion in appeals to “the violation of the territorial integrity of Russia”. Simon has banned from leaving the Peninsula.

Work in the international arena. If before the facts were arriving in Syria from selected countries of the European Union, the media agencies of the occupied Peninsula reported that in the Crimea on a three-day visit, a delegation of politicians from Europe and Ukraine. It is said that the first to Simferopol arrived the representatives of Serbia and the Czech Republic. Also in the delegation will include deputies of the European Parliament and national parliaments of the Baltic States, Germany and the UK, politicians from Brazil, Kyrgyzstan and Ukraine.

Is it really in the list of delegation there are surnames of Ukrainian politicians? “Yet we know that none of the Ukrainian deputies or politicians did not go to the Crimea, commented the “Day” the speaker of the SBU Elena Gitlyanskaya. — Went there from ORDO Zakharchenko and Plotnitsky, who are formally citizens of Ukraine. However, we are continuing to review information regarding a possible visit to the Crimea of the Ukrainian politicians”. Earlier it was reported that the NSDC Secretary Oleksandr Turchynov instructed the security service to prepare a list of MEPs and politicians from EU countries, CIS and Latin America, who arrived in Crimea. If it turns out that this information is incorrect, Council will consider the imposition of sanctions against these individuals.

Therefore, if the aggressor is motivated holds its own, albeit criminal, contrary to international legal standards, the policy regarding the so-called full integration of the Crimea to Russia, what is the strategy of the Ukrainian authorities on the Peninsula? Recently, for example, the opening days of “Day” in liberated from Russian occupation Slavyansk — opening of the photo exhibition and presentation of books from the library of the newspaper “Day”. Given the lack of a strong humanitarian policy of the state in the region, the authorities would be interested in supporting our unprecedented volunteer project. Should be, but… there was Not even adequate information support. And it’s on our territory. How, then, are the things with the occupied Crimea?

“The time has come to develop and launch an international negotiation mechanism for the de-occupation of the Crimea, writes in an article for the Brussels edition of EUObserver, the representative of Ukraine to the EU Nikolay Tochitskii. — Russia should cancel its illegal decision, which led to the occupation of the Crimea. The EU should be ready to step up diplomatic and political pressure on Russia, in particular by strengthening sanctions. To show, therefore, that he would not stand by and allow the subsequent serious violations of human rights. The international community should make all efforts to force Russia to immediately release all citizens of Ukraine, which Russian authorities illegally detained on the territory of that state and in the occupied Crimea. Only Russia’s return to international law will ensure peace and stability on the European continent and eliminate the threat of chaos and the rule of force in international relations.” Meanwhile, the head of the Mejlis of the Crimean Tatar people (banned in Russia organization — approx. ed.) and Refat Chubarov said that Ukraine managed to achieve on the international stage that the world has not forgotten about the crimes of Russia, but there were many omissions. He said this in comments to “channel 24”. According to him, Kiev has been working hard to ensure that the international community has recognized the Russian aggression in Crimea. “In particular, for example, the European Parliament passed a clear statement to Russia demanding the return of Crimea to Ukraine, repressions, etc.” — said Chubarov. However, with regard to domestic policy, then the politician does not see a lot of omissions because it failed to mobilize many aspects of the country for the return of the Peninsula and part of the Donbass.

Not only the state but also society must do everything to end the occupation of the Crimea. Society is the main engine and, accordingly, request, controls, requires, takes part in public actions. From its activity depends. The company is the main source of protection of the interests of the state, the government is a tool. Recently in Parliament, we held the Crimean day. For the first time in the history of independence of Ukraine the children went to Parliament during the session of the Verkhovna Rada and read the poem “When we get back home.” Regularly one to two times in three days of roundtable discussions, where you are going and parliamentarians, and diplomats. All this is a source of prolongation of sanctions.

State enterprise “Crimean house” is actively involved in cultural activities, because Russia strongly wants to level including a cultural component of the Crimea as the basis of identification, so as to give his only Russian territory. On Suvorov street in Kyiv exhibitions, events and press conferences. In addition, in the summer we are planning some large-scale activities in support of the Crimea. Such events are called “Crimean day”, and this, in particular, art exhibition of the Crimean Tatar people and a photo exhibition took place in the parliamentary Assembly of the Council of Europe under my auspices and in the European Parliament. Made a whole programme in Paris and Warsaw. That is, we work, our activity is tangible, and it gives hope that we will turn control over the territory of Crimea. But Russia is more financially sound country. They are funded by stolen money and stolen territories. Occupation for the Russian Federation is a weapon, because in this way the Kremlin has a psychological pressure on people both in Russia and in the occupied territories. But, as said Minister of foreign Affairs Pavlo Klimkin, territory can be annexed, but you can’t steal freedom. Everything will return to normal.

Also, do not forget that some deputies and oligarchs for the purposes of self-promotion, with the aim to receive any dividends or just being an “echo of the Kremlin”, their statements if you do not had damage, it at least did not do anything useful. I mean statements about the possible exchange of Crimea occupied territory of Donbass or the transfer of Crimea in the long term. Is totally groundless and futile proposals that play along with the Kremlin. Ukraine does not sell nor his land, nor his people. Also, many international politicians are trying to find a solution to their problems. Not ours, and it was his. For example, the Hungarian Prime Minister said that sanctions against Russia led to a 6 billion in losses. In fact all of them realize that, given the situation that has developed as a result of aggression of the Russian Federation, their military would have to defend Ukraine, which is part of Europe. It so happened that Ukraine is defending itself, so at the very least, sanctions removed or must not be weakened. Those losses mentioned by the Prime Minister of Hungary is the minimum pay for security, while the Ukraine with his blood protects not only himself but the whole of Europe, whose children sleep in their houses and hear the sounds of the guns. We need to convey to them.

Sergey Kostinsky, Advisor to the Minister of information policy:

— Russia creates a date celebrating their spins, and strongly, since the celebration of certain dates of information has a powerful effect, even if in reality it is unsubstantiated. From our side there is your date. We also have to note, and the Russian just didn’t pay attention. March 18 is a date fake, in fact it is a symbol of lawlessness, aggression, occupation and violation of international norms, and not some holiday. 26 Feb is the date, which is very important for Ukraine and we need to draw the attention of the world. This is the day of the Crimean resistance to the Russian occupation. March 27 is the day when the General Assembly of the UN reaffirmed the territorial integrity of Ukraine. Russia may be plenty to celebrate, people to collect and organize visits of stars, but if the standard of living of people in the Crimea is falling rapidly, here is a no show and promote this fact to be concealed.

We need to ensure effective broadcasting in the occupied territories in all possible ways. Ukrainians should be able to see the Ukrainian television and listen to Ukrainian radio. If this is implemented, such a step would be very powerful blow to the occupier. The Soviet Union fell in part to the fact that the propaganda is completely untrue, and he collapsed with vnosimye decades of myths. As only beginning to get information from the West, the Union began to sway. The fact that Russia is, in particular, in the Crimea, journalists, including Nicholas Simon, only proves that the Kremlin is afraid of objective information. He was afraid of her more than to be convicted of persecution of freedom of speech. Accordingly, Russia will imprison those who writes, speaks and takes to the streets. The international community should be active in providing support and the release of political prisoners of the Kremlin.