Ten years ago from a friend of the girls, I heard the grim joke. It sounded like this: “During the Second world war, the Germans hung three partisans: Ukrainian, Polish and Belarusian. The first two tried to resist, but quickly gave up the Ghost. The Belarusian, meanwhile, hung in and hung in the loop, not intending to go to the light. In the end astonished the Germans took him off the gallows and began to ask why he didn’t die. What the Belarusian said: “at First it was hard, but then I used””.

This popular in Belarus the story was a comment on the passivity of society, which allows to rig the elections and reconciled with his fate, guided by the principle of “if only was not worse”. Such stereotyping of the Belarusian people is common in our part of Europe, however, the events of recent months show that it requires a radical revision.

The epidemic as a test

In fact, about the Belarusian society we know little. Independent sociology in Belarus is not: the last non-governmental centre of research of public opinion was closed a few years ago. Without any scientific studies or results of surveys to say, what do Belarusians think, is difficult. Maybe that’s why this surprise was the fact that during the epidemic of the Belarusian civil society has demonstrated its strength and striking effectiveness.

Meanwhile, as President Alexander Lukashenko repeated that the best means of combating coronavirus is a bath and vodka, and the Minister of health he assented, the Belarusians Shiel mask, helping medical workers and organized events to help hospitals. All this indicates that civil society is unexpectedly showed its potential and was able to get the job done in an inefficient state.

The epidemic has been the impetus for social activity, which is reflected in particular in the beginning in may, the campaign preceding the appointed on 9 August presidential elections. Suddenly in city centers lined up a long queue of those who wanted to put his signature for the nomination of several rivals of Lukashenka. In Minsk, the queue was a kilometre long, but in General they appeared not only in the capital. Such a mobilization on the eve of elections in the last 25 years has not happened. It became clear that in the Belarusian society was born of protest potential.

What angered the Belarusians?

The immediate cause was that the government underestimated the threats related to the still ongoing epidemic, and not introduce preventive measures. Alone to official data, covid-19 infected more than 63 thousand people, that is, in terms of per capita, the incidence rate in Belarus is higher than in Italy or Germany. This is compounded by the difficult economic situation.

The symptoms of the crisis were already evident before, but the epidemic it fueled. It arose in particular because of the outbreak early in the year a dispute about the price of oil with Russia, which for weeks had blocked the oil valve. Although the level of public discontent growing, the government can not, as has happened before in other elections to increase spending on social services. This time do not allow the budgetary situation.

The main reason for the irritation of the Belarusians, however, became tired from Lukashenko, who has 26 years of authoritarian methods to run the country. For much of this period, he could automatically count on the support of a significant number of voters, but now little of it left. 65-year-old President is already neither respect nor fear. Many Belarusians believe that he turns into a comical figure, and his regime is becoming anachronistic. First and foremost, this view is characteristic of the younger generation that grew depressed after the 2010 protests and not living in that world in which their parents lived.

Moreover, during this time, fundamentally changed the media landscape, and the government has lost the monopoly on information dissemination. The development of social networks, the Internet ceased to be a luxury item. For the part of society the main source of information was not TV, and Facebook, its Russian equivalent Vkontakte and Telegram.

An unprecedented rise in the society has caught the authorities by surprise. Mode used to the fact that the majority of Belarusians are not interested in political issues and put up with a situation where the entire country has only one politician. And suddenly Victor Babariko, who until recently was a banker, 430 collects thousands of signatures for his nomination (and this in a country with a population of 10 million people)!

Reactions long wait was not necessary. Suddenly it became clear that Lukashenka’s presidential criminals. Two of them, the above-mentioned Babariko and popular blogger Sergei Tikhanovski, a few weeks ago he was arrested on trumped up charges. They could face up to 15 years in prison. Apparently, this time the authorities decided not to postpone the crackdown until the evening of election day and in some way appreciated the power of protest, determined to strangle it in the Bud before it spread their wings.

Belarusians is, however, not scared. Actions of solidarity with the detainees swept across the country from the capital to such places as the city of Skidel in the Grodno region, where the lives of 10 thousand people, or Gantsevichi with a population of 14 thousand. To the chorus of critics of Lukashenka joined by several journalists from the state media, athletes and celebrities. This is for Belarus, the situation is unprecedented.

As a result of repression only gained more momentum. In recent weeks, has arrested nearly 700 people (journalists, employees of election headquarters competitors of the incumbent). Police detained even half a dozen people standing in line at the store “Cymbal” that sell Patriotic clothing and t-shirts with anti-government inscriptions. Thanks to the Internet for hours about it learned the whole country. Law enforcement authorities seized, in particular, 419 t-shirts with the inscription “PSHOT%”: this is an allusion to the fact that Lukashenko could count on the support of only 3% of voters. As soon as the store opened again to them already lined up 500 people.

This nascent anti-systemic movement has no focal point, no leaders. The “old” opposition has no weight and is not popular, people take to the streets spontaneously, none of this calls. Never before, nothing like in Belarus was not observed. Significantly, the protests have ideological overtones. This is not a debate on the topic of different political and economic programs, or even more someone to integrate Belarus: with the West or with Moscow. At the current stage we are talking only about Lukashenko.

Power, of course, describes the situation differently. The President invites foreign interference in Belarusian internal Affairs, behind which are the people both from Russia and from Poland. The Belarusian leadership cannot even imagine that the citizens can complain on their own initiative.

A wave of arrests accompany open threats sounding from the lips of Lukashenko. This is a sure sign that the regime was scared. During a televised meeting with the KGB Chairman Valery Vakulchyk (the secret police in Belarus continues to carry the former name), the President said: “We know their goal, they are going to give us a marketplace on the eve or on the day of the presidential election. (…) I want to warn you: the Maidan, we will not. We must not allow different kinds of gangs and gangs of criminals roamed the countryside with sleeves rolled up: people, God forbid, think that the Gestapo came back.”

There have also been changes in the government. The new Prime Minister was appointed Roman Golovchenko, who previously headed the State military-industrial Committee. Other shuffling indicate significant growth in the influence of the KGB and security agencies in the state apparatus. The face of threats to the regime closes ranks and relies on the most reliable frames.

On the occasion of the reshuffle in the governing bodies, Lukashenko has continued a campaign of intimidation. “Have you forgotten how former President Karimov in Andijan suppressed the coup, shooting thousands of people? (…) We do not survive, so we, at least some, do not want to understand. Well, we recall,” said he. It was a reference to the events that unfolded in 2005 in Uzbekistan, where the army opened fire on peaceful demonstrators. Lukashenka’s words are difficult to perceive otherwise as the signal “if need be, we’ll shoot.” In addition, in early July, the head of the security Council stated that “the armed forces have the right to participate in the restoration of constitutional order on the territory of the Republic of Belarus”.

The General election is only a month away, but already abundantly clear who the Central election Commission will announce the winner. More important is the question what will happen next. It is not known how will react the community. However, it seems that even the Belarusians themselves surprised at what a large number of them in one way or another expressed dissatisfaction with the regime. In recent weeks they seem to have learned about something, which is not even suspected. Regardless of what happens on August 9, one thing has become clear: the former social contract between Lukashenko and society is finally broken.

The author is Deputy Director of the Warsaw centre for Eastern studies. 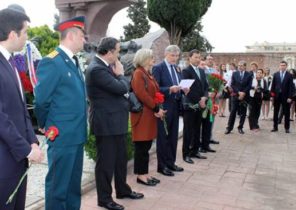