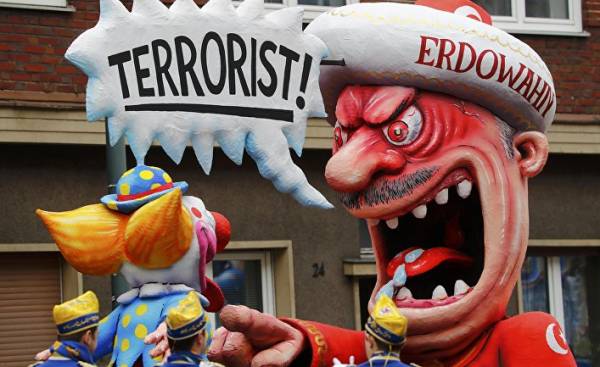 If we live only for the present, and to analyse minutely the course of events, we will not be able to come to correct conclusions. Especially in the analysis of the relations between States from different civilizations, it is necessary to establish a link between the past and today. If you look at the events from a civilizational perspective is not to ignore the role of religious affiliation of societies in the formation of value judgments, develop the rhetoric hangs in the air and will lead to disconnection with the past. However, there are because of its history. For example, when considering the relations of Turkey with EU countries the analysis conducted without regard to its conflict of Europe with Islam, and the mentality of the crusaders, will not give any certain results. If recent events, which began in Germany and continued with the participation of the Netherlands, Denmark and Austria, to consider independently from each other without establishing a connection with the past, these events may seem isolated case. However, when it comes to Turkey and Islam, it is necessary to analyze what is happening as hostility to Islam, Islamic civilization and organic from failure to digest it. In other words, the position of Germany and the position of the Netherlands, Denmark, Austria are not independent from each other.

Unfortunately, today are such evaluation of events, without examining their connection with the past, they miss the crux of the matter. It even leads to the fact that the admirers of the EU are in a deep disappointment. Despite this disappointment, there is a desire to prevent further aggravation of tension in relations with the EU. In other words, while there is a hope that Turkey might still be on the way to the EU.

If the background of recent events, someone sincerely believes that EU countries have decided to fight Islam, and interprets what is happening, on this basis, to believe that the struggle of the EU or, in other words, the Alliance of the crusaders against Islam has started, wrong. Because from the beginning the Alliance of the crusaders sought to destroy Islam and Muslims, and when they felt strong, went into action. While unifying the position shown in interim periods, do not reflect reality, and is a requirement of certain conditions. From this point of view, those who have forgotten or chose to forget about the Crusades, leaving them to gather dust on the shelves of history, can engage in self-deception. But they should not have the right to deceive and mislead the society.

When from the depths of history, we come to more recent times, attacks of the crusaders in the beginning of last century to divide the Ottoman Empire is enough to show that their war against Islam continued. Moreover, this war is still not over. She continues, despite the fact that in the attacks of the crusaders in the Islamic world their leader is different every time. The occupation of Iraq, Afghanistan, the Crusades on the Islamic world, which began under the name “Arab spring” and still not finished — if you do not take all this into account, the analysis of events will be incomplete.

Meanwhile, in a period when there are disputes about the necessity of NATO’s existence after the collapse of the Soviet Union, followed by the Warsaw Pact, Islam and Muslims have been identified as the new enemy of NATO, and I think that the choice of NATO is enemy green is also need to keep in mind to see Islamophobia crusaders. That is Islamophobia crusaders never stopped, only someone keeps telling us that this hostility remained in the depths of history. If Islamophobia crusaders, I wanted to explain above, has not been forgotten (or tried to make people forget), is the last 50 years we would have spent at the door of the EU?

The odd thing is that even against the background of recent events, the leadership of our country does not go from the doorstep of the EU. The most that he comes to mind — to unilaterally cancel the agreement on refugees. However, since the EU does not comply with the terms of this agreement, it was already cancelled unilaterally. This question is trying to circumvent the harsh statements and thus support the anger of society. However, from the beginning it was possible to take some steps, not making harsh statements. In words, we immediately find what to say to the EU, but when it comes to action, we don’t take anything serious. It is obvious that today, as yesterday, EU countries retain the mentality of the crusaders, but we, Turkey, or don’t see this fact or do not want to see. Although for us it always ends badly.