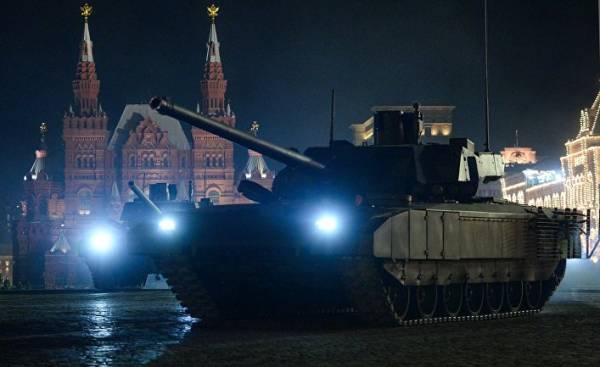 Russia and China increasingly challenge America’s military superiority, which she kept from the beginning of 1990-ies.

After the end of the cold war, naval, air, ground and space capabilities of the United States in conjunction with several key bases in Europe and Asia allowed them to gain a strategic advantage over other major powers.

US spending on defence is still greater than the cost of their rivals: the US military budget, which is about $ 600 billion, exceeding the military budget of Beijing three times, and the Moscow six times.

However, a significant portion of these funds spent on foreign military campaigns such as the fight against ISIS (a terrorist organization banned in Russia — approx. ed.) in Iraq and Syria.

“The American army… sent to the other end of the world to fight. And she fights in the regions belonging to the sphere of influence of other countries, sometimes in places which were chosen by other countries. And this is a serious problem,” said David Ochmanek (David Ochmanek), a military analyst at the RAND Corporation.

Meanwhile, Russia and China spend most of the money on the modernization of their armies, in order to enhance their potential. And this strategy is yielding huge dividends, especially in the case of China.

“We are not talking about one or even several areas. If you look at the evolution of the Chinese army in the last 15 years… she is amazing. Ballistic missiles, air defense, aircraft, means of electronic warfare — they have invested huge funds and modern weapons,” said Ochmanek.

However, according to experts, China is not seeking to compete with America in military power. The purpose of the China — strengthening positions in the Asia-Pacific region.

“China is not necessary to achieve parity with the United States in the sense of military potential to present a serious threat. They just need to reach an “acceptable” level, and they soon reached it, if it has not already happened,” said Harry Craze (Harry Krejsa), expert at the Center for a new American security.

“The aim of China is to control the surrounding sea — a much less ambitious goal in comparison with the global mission of the United States, consisting in the guarantee of freedom of navigation and trade.”

According to experts, the most visible manifestation of modernization of the Chinese army became his new naval and ballistic potential. This includes anti-ship missiles that can destroy aircraft carriers, and cyber systems can cause failures in the American system of logistics and communications.

Chinese ballistic missiles pose a new threat to the U.S., especially when it comes to air bases in the region.

“If you think about those conflicts that we waged after the end of the cold war, starting with “desert Storm”, you will understand that before we were never disturbed by the possibility that our bases can become targets for missiles… So it becomes a serious problem for American military strategists,” said Ochmanek.

According to experts from the International Institute for strategic studies, the rapid development of China’s new weapons class “air-air” “will complicate the traffic situation for the F-35 and the led.

According to Kreisi, these developments are part of the “group of funds, sometimes called money “bar/access zone lockdown” or A2/AD,” and they are conducted with the purpose “to limit the US ability to project power and influence in the Western Pacific ocean.”

Meanwhile, Moscow seeks to develop new technologies that will threaten the capacity of the US in Europe and Asia.

The most notable success the Kremlin has made in modernizing its nuclear weapons and improve the means of attack, which can bypass the American missile defense system.

In the summer of 2016, Russian President Vladimir Putin noted the progress of the Russian army, saying that Russia managed to achieve significant progress in the modernization of its armed forces.

“We have upgraded our systems and successfully develop new generation. I’m not talking about the systems to overcome missile defense systems,” said Putin in June last year.

“We warned that we do it, we said this and we do. And I assure you, today Russia has made significant progress on this path”.

Tony Cordesman (Tony Cordesman), analyst at the Center for strategic and international studies, believes that Russia’s successes in modernization of nuclear weapons and precision-guided cruise missiles should be for the Pentagon cause for concern.

“Note the technological improvements in areas such as missiles. Undoubtedly, they aim to develop more modern nuclear weapons, including strategic system,” said Cordesman.

“Russia’s successes in the improvement of high — precision cruise missiles should also cause for concern,” he added.

Another example of Russia’s successes in modernization of the army is its T-14. The report “Military balance 2016” (Military Balance 2016) prepared by the International Institute for strategic studies, said that this “revolutionary” tank will use the new technology, able in the future to “change the momentum on the battlefield”.

“The most revolutionary is the main battle tank T-14 on the basis of “Almaty was” the desert tower… When it is put into service, “Armata” will be the first tank with uninhabited turret, equipped with active protection system… It will change the dynamics on the battlefield by increasing the value of guns, anti-tank guns and tanks,” the report said.

However, unlike large-scale program of China’s modernization of the armed forces, the military spending of the Kremlin is very dependent on the fluctuations in the Russian economy. Despite the fact that Russia spends on defense less than the United States and China, often she spends on defense more than a significant proportion of their GDP.

Military innovations of China and Russia caused a reaction from the new U.S. administration. It is expected that in 2017, the defense budget President Donald trump will increase by another 10%.

Immediately after the announcement of trump’s administration to increase military spending Beijing has promised to increase its defence budget by 7%.