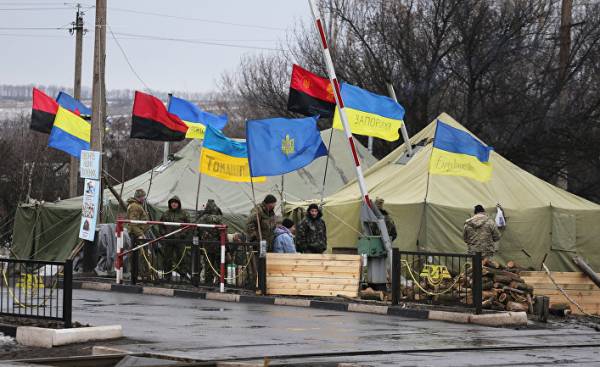 The escalation of the conflict in Eastern Ukraine has been happening for weeks. Shooting does not pass a single day, again use heavy weapons. The OSCE reports that, in fact, should monitor compliance with the long-agreed cease — fire- not that other, as helpless testimonies of the war, continuing for three years.

Sides — the separatists and their supporters in the Kremlin, and the authorities in Kiev politically, too, add fuel to the fire, step-by-step cements the split of Ukraine. And, as luck would have it, Kiev has only accelerated this process, when the Council of national security and defense Council (NSDC) decided to stop all trade with the occupied territories of Luhansk and Donetsk regions.

Kiev has succumbed to the pressure

Financial flows between Kiev and Pro-Russian separatist controlled parts of Donbass stopped for a long time.

The consequences of this step were fatal to the people, especially the elderly, who have to travel the dangerous path along the demarcation line, to receive a pension or other social welfare payments from Kiev. With the introduction of the economic blockade Kiev stops the supply of Donbass any kind of goods.

Thus, the Ukrainian authorities headed by President Petro Poroshenko gave in to the pressure of armed activists who two months ago, already blocked railway communication between Ukraine and Donbass.

Before some politicians in Kyiv, including Poroshenko himself, criticized their actions. Now, a controversial initiative of the activists turned to the state of the blockade in the name of national security.

The people in Donbass abandoned to their fate?

In official statements Kyiv emphasizes that the uncontrolled territory of Donbass belong to Ukraine. Trade with this region should be restored as soon as the separatists will cancel the recent decision of illegal “nationalization” of Ukrainian enterprises. It seems that in this way Ukraine adopts policy initiative. But in fact, this may play into the hands of the separatists and Russia now, they say that Kiev turned its back on the people in the Donbass.

The plans of Ukraine about the Association can thus lose all meaning. Many politicians not only in Kyiv, but also in the East of Ukraine for a long time indicate that Ukrainian authorities are doing too little in order to once again to sway the people in the Donbass. It seems that this goal is extended further.

This decision Kiev is cheating and those countries that are making efforts to resolve the conflict in the Donbass. These include Germany and France, which in the framework of the Minsk agreements has always supported the unity and integrity of Ukraine and opposed to any measures that could exacerbate the conflict.

The imposition of economic blockade is one such step. Therefore, the reaction of the German authorities on the economic blockade by Kiev and the misappropriation of Pro-Russian separatists of Ukrainian enterprises is hard, respectively.

Only Russia, which after the annexation of Crimea has provoked the conflict in the East of Ukraine, will rejoice in such a gift from Kiev.

Bernd Johann is head of the Ukrainian edition of DW.