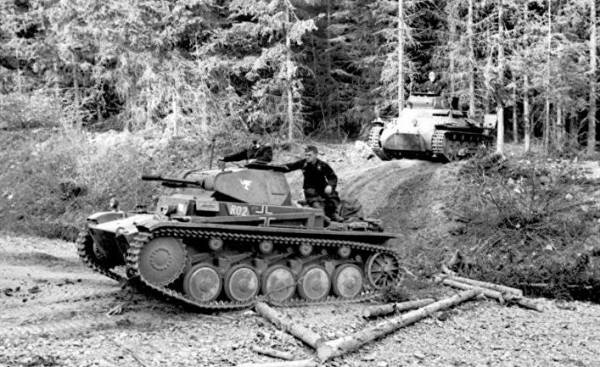 The injury was very painful. All officers of the German General staff, 1933 — directly or indirectly witnessed, as in 1917-1918, the British and French tracked combat vehicles almost unhindered broke through the German defensive line. This should not happen under any circumstances, however, the German Reich was bound hand and foot by the Treaty of Versailles, the head 171 which stipulated that the Germans had banned the production and import of “armoured vehicles, tanks or other similar devices that could serve military purposes”.

Therefore, there was a secret test, disguised as “test lung and large tractors” that took place in 1929-1933 in illegal Soviet tank school in Kazan. In Germany, tests were conducted of vehicles, tractors and other equipment, dressed in “armor” made of wood.

After coming to power of the Nazi party with such restraint was over. Back in the summer of 1933 the Agency to supply ground forces with weapons and demanded to develop a light training tracked machine weighing four to seven tons. The main features of this model — and medium variant weighing 15 tons, with a gun of caliber of 3.7 cm and a heavy version weighing 20 tonnes, gun caliber 7.5 cm, was the result of held in Kazan tests.

Modeled a few more French heavy tank Renault FT of 1917, the first German combat vehicle since the failed model A7V had to have a tracked drive, and rotating tower. For the gun — even a two-centimeter caliber — the design was too light, so the tank got two parallel machine gun.

Tests of the first prototypes under the name of Panzer I began in December 1933. Four-cylinder boxer engine developed capacity to almost 60 horsepower, top speed on a flat surface was 35 km/h and at most half of this figure on rough terrain.

Of course, the “founding father” of the German armored forces, major-General Oswald Lutz (Oswald Lutz) and his chief of staff Heinz Guderian (Heinz Guderian) knew that such tanks they will never win the war, although the Panzer I tank was faster and more modern than the FT, but had much weaker weapons. While serial production is already largely developed heavier models weighing 15 tons and 20 tons of German industry had a long way to go.

Therefore, in the first half of 1934, Lutz decided to bet on a temporary a model weighing from eight to ten tons, although initially its production was not planned. In July 1934 issued a decree of the Ministry for armaments for the development of such a tank. He had to have full caterpillar drive turning in the tower, able to withstand a two-centimeter caliber gun. The engine has to “give” not less than 120 horsepower and provide a speed of 40 km/h on a level surface.

However, development was delayed. First dosering sample was not adequate to the tasks: the motor was too weak, the transmission is worthless. Only in spring 1937, MAN and Daimler-Benz released the third preliminary machine series, meet the management’s expectations. Immediately after that began its serial manufacturing.

Tanks of the first three series were produced unchanged until 1939, and their total number was 958 copies. Some of them, like pre-production cars, and also tanks Panzer I participated in the Civil war in Spain in the “Legion Condor”.

However, most of them formed the backbone of the first six tank divisions. Each of them were 300 combat vehicles, and the Panzer II model — 160 pieces — was the most important part. The rest of the weapons — several dozen tanks Panzer III, Panzer IV and a lot of training machines Panzer I.

In the course of military campaigns in Poland and on the Western front, the main burden fell on the tanks of the Panzer II. In the course of only two weeks of fighting against the Polish army 83 cars had to be written off as irrecoverable loss. In France losses altogether amounted to 240 tanks Panzer II for two months.

Although the front-wheel drivetrain with five lower and four upper rollers on each side proved its effectiveness, the armor of the tank was less than a centimeter and a half and were not sufficiently reliable. However, on the front tower and its thickness reached about three centimeters, however, it could break from a light cannon like the French Canon d’infanterie de 37 modèle 1916.

However, the serial production of the tank Panzer II in a small volume continued, although it has also started manufacturing models of the Panzer III and Panzer IV. If in 1940, the Wehrmacht officially ordered 1,000 light tanks, in the beginning of the war against the Soviet Union it was already about 1200 cars of this model. However, they are not used in an offensive and reconnaissance operations. Of the 200 cars, which usually had one tank division, 65 had to be the model of the Panzer II.

Only in July and August 1941 in the battles against the red army, the Wehrmacht lost 223 tank Panzer II and by the end of the year the loss amounted to 219 tanks. Since that time, their total production was only 207 copies, the number of Panzer II German divisions sharply declined.

In preparation for the so-called Plan Blau, the second offensive of the Wehrmacht on the Soviet Union, the tanks are Panzer II was abandoned. Their platform began to be converted into self-propelled artillery, so their production was reduced, but not stopped completely.

The most famous model was the Marder II, equipped with an anti-tank gun or captured Soviet 7.62 cm or German 7,5 cm Pak 40. Also on this base mounted anti-tank howitzer Wespe, produced in nearly 700 copies. But self-propelled gun Sturmgeschütz II 15-inch caliber has not met the related expectations: an elongated chassis proved to be very vulnerable during operations in North Africa, so that it produced only 12 instances.

In the spring of 1943 the Wehrmacht brought out weapons latest tanks Panzer II. However, several machines remained in service with the Romanian and Slovak armies. Say that a few tanks of this type used by the Lebanese army in the middle East war of 1948. Moreover, a captured self-propelled gun Sturmgeschütz II had the Egyptian army. And the story of the temporary tank Panzer II ended.