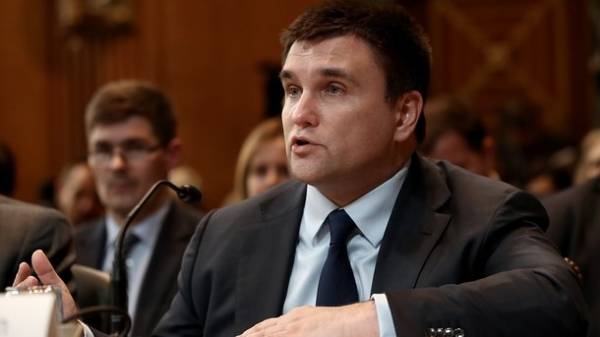 “We this week began hearings in the International court of justice and we will prove that Russia is fundamentally violates the Convention that establish the rules of the international world,” said Klimkin at a joint press conference with Minister of foreign Affairs of France Jean-Marc Ayrault on Thursday in Paris.

The Minister also emphasized the absurdity of the evidence and arguments of the Russian side, presented yesterday at the International court.

“When Russian officials in the Hague officially say that these hundreds of tanks, armored vehicles, endless amounts of artillery, “Grad” and all the rest just found in mines, that the whole world laughs, but it’s certainly unkind laughter. We understand what you’re dealing with, so we must bring the process to the end and to bring peace to Donbass”, – said Klimkin.
The Minister of foreign Affairs of Ukraine stressed the importance of non-recognition by the world community of the occupation of the Crimea.

“No compromise on the issue of temporary occupation of the Crimea. She will never be recognized by our partners and friends. It is a position of all civilized States, and anyone who understands the international rules and values,” said the foreign Minister.

As reported earlier, the representative of the Russian Federation in the Hague, said that Pro-Russian rebels and their tanks, “Grad” and other weapons pulled from the mines in the Donbas.

As you know, on March 6 began a four-day hearing at the International court, in which were alternately made by the representatives of Ukraine and Russia, providing its arguments. Today’s hearing ends with the statement of the Russian side.