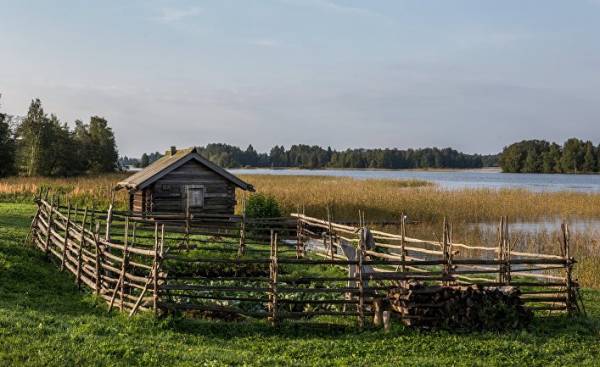 97-year-old Viana Zlobin (Vieno Zlobina) opens the door of his apartment in the Estonian city of Parnu with a smile and leads visitors into the living room. Only memories give her age. She really was the “eternal way”, which tells novel Tuuri Antti (Antti Tuuri) and which will be discussed in the movie “100 Finland” (Suomi 100) in September 2017.

The protagonist of the novel “the Eternal way” (Ikitie) — the man Lapoile movement (the fascist movement in Finland during the world economic crisis of 1929-1933 — approx. lane) was expelled from Finland to the Soviet Union, and who decided to build a Paradise for the proletariat.

When Vieno Zlobina was six years old, her Finnish parents Alice and Emma ahokas (Elis, Emma Ahokas) moved in pursuit of the ideals of the canadian mining town of Cobalt in the Soviet Olonets to build agricultural commune “Säde” (in Finnish “three” — “the beam”).

“Parents wanted to make Karelia government workers, in which everyone would be equal,” says Zlobin.

When the train arrived in St. Petersburg, a six-year Vieno saw from the window how people carry rectangular objects. Father suggested that they carry bricks to the construction site. It later emerged that people were carrying loaves of bread.

Many things were in the Soviet Union other than their imagined displaced.

The beginning, however, was bright and ideologically colored. “Dad gave me 50 cents and told me to buy myself something. I bought a portrait of Lenin,” — says Zlobin.

90 years later this purchase is laughable. The details are still fresh in memory as Zlobin recently finished writing a memoir about the commune “Säde”. Institute of migration in Finland (Siirtolaisinstituutti) will publish a book of Zlobina “Their ideals were destroyed” (Heidän ihanteensa murskattiin) in April 2017.

The book tells a cruel story about the Finns who with their hands build socialism, trusting society, which subsequently will destroy them as enemies.

“By 1929, just four years, our small group made arable the marshy wasteland. There is a new successful economy,” says Zlobin.

On the wall in her living room hangs a favorite painting, which depicts the courtyard of the “Säde” a barn, a pigsty, a water tower and a residential home. In the side room lived the family focus. All work was distributed among the members of the commune, including cooking and washing clothes.

According to various estimates, during the “Karelian fever” (Karjalan kuume) in the early 1930-ies from North America to Soviet Union moved 6-6,5 thousand Finns. Departure accelerated the propaganda in the Newspapers — for example, in American Communist publications Vapaus, Työmies, Eteenpäin and Toveri (“Freedom”, “work”, “Forward”, “Comrade”) appeared in the Finnish language.

“Propaganda is the worst enemy of man. Believe her,” — now says Zlobin.

She still remembers the Finnish poem learned in childhood: “I was in Russia, king Niko, but the workers threw him out and following him shouted, “Now our power!””

In Karelia Zlobina started to go to Russian school of Olonets. At first, she even hesitate to put on his cloak, brought from Canada, because he was ridiculed classmates. Soon games kids woke up, her love for the Karelian language. Years later Vieno he defended his thesis on the phonetics of Karelian language and headed the Department of Finno-Ugric languages of Petrozavodsk state University.

“I like the Karelian language, it is harmony,” says Zlobin.

In the early 1930s, the Finnish builders of socialism overtook the Stalinist persecution. First commune “Säde” became a collective farm. This was followed by the first arrests and links. Father Vieno requested the assistance of the Consulate of Finland.

However, it was useless, because the family received the citizenship of the USSR.

During harvest in 1937 Vieno was at home, and the father cleaned well. The yard stopped the truck. The police forced the men of the commune to get into the body.

“We gathered with the mother of dry clothes for the father, but we were forbidden to transfer them. He had to leave in those wet clothes.”

Then Vieno never saw his father. She was the “daughter of an enemy of the people”, and she was fired from the post of librarian in Olonets. Later Vieno still managed to get another job.

During the Soviet-Finnish war of 1941-1944 (the continuation War) before joining the Finnish soldiers of the commune were burned by the decision of local authorities. Mother Vieno heard cows roared in a burning barn.

Vieno fled by ferry across lake Onega, then across the Volga to the Caspian sea and, in the end, came to Kazakhstan. After the war she returned to Karelia. For years she begged the Soviet authorities to give her permission to visit relatives in Finland.

“When I finally ran away, never came back,” says Zlobin and laughs. She returned via Finland to Canada and drove to his home town of Cobalt.

“I was thinking how cute he was. Of course, it was a mistake to leave here.”

Zlobin understand why her father made that mistake. Finnish miners longed for land and Karelia. They were appropriate for propaganda.

After the collapse of the Soviet Union Vieno Zlobin learned that his father was shot two months after the arrest. Later he was acquitted.

Three years ago Vieno Zlobin moved from Canada to Estonia to be closer to his grandson.

“I’ve always lived in difficult conditions and was under pressure,” Zlobin recalls his life in the Soviet Union.

It plans to write an article about the history of Karelia.

In 1926 he moved with his parents to the Soviet Union to build agricultural commune “Säde” (in Finnish “three” — “the beam”) near the village of verkhov’e (Olonets district).

Went to a Russian primary school, and also for the senior classes of the Finnish-speaking schools. Started learning the Karelian language in the Petrozavodsk pedagogical Institute.

He defended his thesis on the phonetics of Karelian language in Petrozavodsk state University and headed the Department of Finno-Ugric languages.

Was married to an English teacher Mikhail Zlobin.

After retirement living in Estonia and Canada. Learned to use a computer at 80.

The memoirs Zlobina “Their ideals were destroyed” (Heidän ihanteensa murskattiin) will be released in the spring of 2017.