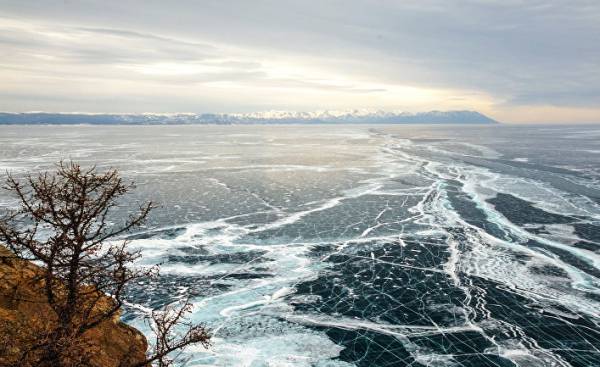 Baikalsk, Russia. Today the main topic of discussion on the lake is the toilets. At least, this is indicated by the conservationists.

The Baikal pulp and paper mill in Soviet times, has long been the main bugbear of these places because it was located right on the shore of this beautiful lake, spewing waste into it. Meanwhile, the share of lake Baikal accounts for a fifth of all the unfrozen fresh water on the planet’s surface. After the closing of the plant three years have passed, and now the struggle for the preservation of the lake is conducted in other areas.

Someone believes that now the fight has become even harder. It is necessary to change the daily habits of the people, centuries living in this remote area of Siberia, and also control powerful streams of tourists (mostly Chinese), for which Baikal has become a romantic place.

“It was easy to say that all the fault of the plant, says 55-year-old Marina Rikhvanova for which the preservation of the lake has become a matter of life. — But much harder to say that to blame myself, because of problems with my toilet.”

Baikal is included in the world heritage list of UNESCO, on the map of Siberia like a giant blue apostrophe, located in the narrow failure of the rift valley. It is the deepest freshwater lake on our planet. The younger generation is increasingly aware that the Baikal is in need of protection, but this view has not yet become widespread.

“We’ve raised several generations who look at it differently, says 63-year-old veteran of the Baikal nature reserve Nikolay Volodchenkov living in the village of Tankhoi and worked in the reserve for 40 years. He is still responsible for feeding two caged Sables and openly rejoices in the fact that after the closure of pulp and paper mill lake stopped to smell bad.

The plant was closed, but more so on economic, not environmental reasons, and now in the city of Baikalsk with a population of 13 thousand people shows traces of a deep transformation. This city on the southern shore of lake Baikal is trying to shed his image as a dirty industrial center and turn into the resort. He offers everyone the ski slopes with stunning views of the lake, hotel rooms in huts, and the huge array of dried berries that are harvested in the surrounding woods and drink with organic Siberian tea.

But it was not always so.

When Rikhvanova first appeared here in 1990-ies and demanded to close the plant, the locals hated her for what she decided to deprive them of work. Part of the discontent remains, but many who wanted to work quietly in a state enterprise, went to other places, and now the attitude is changing.

“If before the word “environmentalist” was a dirty word, it now calls itself, every resident of the region”, — says Tatiana Gluckman, who previously worked at the plant, and then became a local politician. In the past, this energetic woman was struggling with Rikhvanova, but now became her chief ally in this town. “I might idealize, but rather, it is the way it is,” she adds.

Rikhvanova used an environmental award in the amount of 25 thousand dollars in order to Fund nine of the 60 projects presented at the contest organised by it on creation of sustainable jobs. “We had to overcome the Soviet inertia and get people to believe in themselves,” says Gluckman.

One of the converts was a portly engineer with a red face Boris Barsuk, who is 63 years old. Brisac left the plant, he worked in different places, including a taxi driver and electrician. And in 2015 he decided to do their own thing, and now helps people drying the berries to make juice.

Brisk, enters the café, bending under the weight of heavy packs, which are boxes with dried berries and bottles of berry extract. “When the question arises about the environment and about survival, people think more about the income,” he admits.

Was recently adopted another environmental measure that has caused discontent among the population — a two-year ban on fishing of omul. Of this fish to make smoked delicacy which traders sell everywhere.

But the greatest concern is the tourist boom. From Beijing to Irkutsk only three hours fly. Chinese tourists have flooded the area in 2014, when the ruble.

A group of Russian and Chinese investors recently announced its plans to invest more than $ 11 billion in the construction of hotels and other tourist facilities. Conservationists are concerned that if this plan is implemented, it will hurt the environment.

“We cannot invite tourists to those places that they are not prepared”, — said the Director of the Baikal nature reserve with an area of 167 871 hectares Vasily Sutula, showing a lovely tourist center on the shore of the lake, where there are several samples of local flora and fauna. He thinks about how to make an explanatory inscription in Chinese. “But most importantly, don’t these Chinese labels, and new toilets, ecological trails and the guest house,” he says.

People in Russia are the hardest to convince that resources are not unlimited. If someone is in the country pollute the water or land, it is always possible to find in other places. The reserve staff are trying to change the attitude of people.

The number of tourists wishing to see the beauty of lake Baikal, constantly growing, and environmentalists are faced with the fact that in this area almost completely devoid of water treatment plants and composting toilets that produce compost instead of sewage. “Toilets, kitchens — all contaminants of them fall in the ground water and then straight into the lake,” explains Rikhvanova.

Large accumulations of the algae blooms have become a real curse for some locations on the lake, although some argue that it is the result of lowering the water level in the lake due to the drought, and not some human factor. In some villages there are shortages of water, because artesian wells have dried up.

“People think we lived on the lake for hundreds of years, and we have always had such toilets. So we will be able to live forever, — says Rikhvanova. — There is not enough understanding of the fact that lake Baikal is large, but easily vulnerable”.

There are other dangers.

Those chemicals that remain after the closure of the plant gradually seep into the groundwater and poisoning the lake, as evidenced by the research conducted by the Ministry of natural resources of the Irkutsk region. Of concern to the Russians also produce plans of Mongolia to construct a dam on the river Selenga, which flows into Baikal.

Moscow takes certain measures to protect the lake. The Federal Minister of natural resources Sergey Donskoy said that the government would build in the area a new wastewater treatment system, and will give local authorities additional powers to implement Federal environmental programs.

Much important role plays the activity of the local population. The problem of lake Baikal is one of the things that spontaneously bring to the streets thousands of protesters, if the threat becomes obvious. A few years ago, when the state pipeline company Transneft proposed to build along the pipeline, the society is strongly opposed, and President Vladimir Putin ordered to withdraw the route of the pipeline to the side. It was one of those rare occasions when he agreed with the protesters.

Businessmen try to create various projects, such as building nurseries where they grow the seedlings and saplings are endangered plants. The project “Great Baikal trail” each year attracts thousands of volunteers who help to create Hiking trails. In addition, the organizers have plans for the installation of environmentally friendly composting toilets.

All of this suggests that people’s attitudes are changing. However Rikhvanova premature to declare the battle for lake Baikal has been completed.

“We have made changes, that’s for sure, but I can’t say that we won, she says. — Still too many unsolved problems. It is not the time to shout hurray”.

In the preparation of this article participated Ciskowski Sofia (Sophia Kishkovsky).