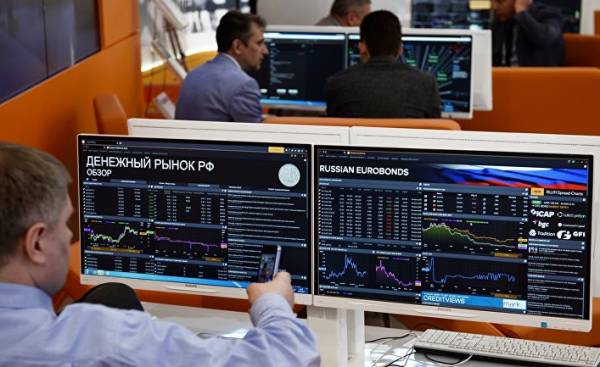 The national debt of this nation is cheaper to insure against default than the national debt of Italy. Economic recovery, the rebound in oil prices forced the safe Harbor to move to Russia. Russia looks like a safe option for owners of bonds.

For managers of investment funds concerned about the upcoming elections in Europe, the worst relations with the West since the end of cold war and sanctions against the largest Russian companies are not a limiting factor. Public debt is cheaper to insure than to do the same with the national debt of Italy. The victory of the populists in the election in the Netherlands on 15 March could give an impulse hostile to EU candidates during the elections this year in France, Germany and perhaps Italy.

Russian bonds began to be perceived as a safe haven after the recovered oil prices helped bring the country out of the deepest recession over the last two decades and to raise the ruble to record lows. The average income in Russia is nine times higher than the average in the Euro area, and therefore, investors receive more compensation for the risks in Russia than in France, where, according to most opinion polls, the leader of the first tour scheduled for next month election is the candidate of the party “national front” marine Le Pen.

“The eternal paradox is that the country is under sanctions, as is commonly believed, has a low volatility and is therefore attractive for investors,” said Greg Saichin (Greg Saichin), the main investor of the division of bond markets in emerging markets located in London Allianz Global Investors, under which is a 480 billion Euro ($511 billion). — You need to remove the hat about how they were able to cope with the recession”.

After losing 100 basis points in the past year, the Russian five-year credit default swaps (credit-defaul swaps) traded today at levels that allow this country to shake off the garbage ratings, highlights Sachin. Investor services company Moody’s, which together with the S&P Global Ratings places the country one notch below investment grade in mid-February changed the rating from negative to stable.

Russia also profits from a more significant shift of interest from the European market towards the bond market of emerging economies. Exchange-traded products that track bond indices of the countries with developing economy, has attracted $ 1.3 billion in February, while in Europe this kind of products recorded an outflow. This was reported last week one of the analysts at BlackRock Inc.

“If you are concerned about the situation in Europe, it makes sense to pay attention to the emerging economies,” said John ROE (John Roe), head of diversified funds of the company Legal & General Group Plc., the largest Manager of pension assets in the United Kingdom. The number of bonds is limited by sanctions imposed over Ukraine, and therefore, the factor of deficit makes Russia a “top pick” among countries in the developing world, he said.

Russia has contributed in fanning political passions in Europe, and funded by the government, the media widely reported the activities of opposing the establishment parties.

The Impact Of The Federal Reserve

The attitude of the Russian debt may change for the worse if the US Federal reserve this week will decide on the move to a more hawkish monetary policy.

Investors in emerging markets concerned about the possibility of higher interest rates, so any hints regarding more rapid rate of improvement this year “could spur a deeper correction in risk assets,” he said in a discussion paper last week, the experts Bank of America Corp.

The number of new jobs increased in February at a faster pace than according to the predictions, and this was an additional argument in favor of a more stringent monetary policy. Revenues from the Russian sovereign dollar-denominated bonds maturing in may 2026 jumped 15 basis points last week, and this was the biggest increase since the period ended 18 November last year. They rose by three basis points, and 10:25 a.m. Moscow time, the figure was 4.35%.

The relative calm in Russian markets may help the government to issue its planned Eurobond, which, according to economy Minister Anton Siluanov, can be on the market in the spring. Russian companies have already benefited from improved market sentiment and increased this year by approximately $ 3.4 billion sale of foreign currency-denominated debt obligations.

Richard Segal (Richard Segal), working in London, the investment analyst of Manulife Asset Management (343 billion dollars under management) recommends buying any state bonds of this country in foreign currency, and dollar-denominated bonds of companies in the metals and mining sector.

“The Russian Eurobonds have become a relatively safe Harbor” — he said in an interview during his recent visit to Moscow.