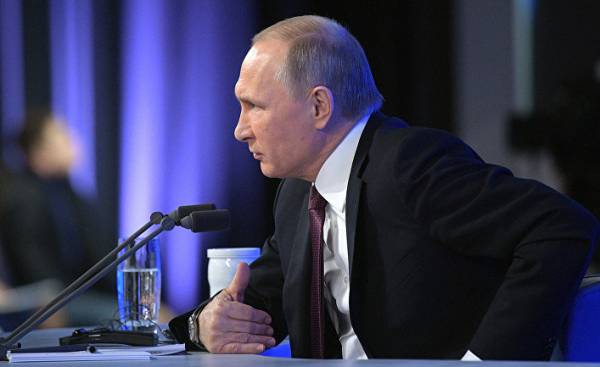 Vladimir Putin gained a reputation as a strategic thinker and an active player due to the fact that he always managed to be one step ahead of your opponents. His lightning annexation of Crimea caught the world by surprise, and then thought, “He’s never gonna go.” Putin intervened in the Syrian conflict with the West which was unprepared, and the Russian President made it just in time to rescue the client regime of Bashar al-Assad. When the West made concerted efforts to its political isolation, Putin sent regular troops to Eastern Ukraine and got to a place as “mediator” in the peace talks in Minsk. Putin constantly puts helpless Western leaders at a disadvantage, and they have to react, not Vice versa.

Donald trump is perhaps the first President of the United States, who managed to surprise ruling for the past 17 years the Russian President and to cause him confusion. Campaign trump has provided Putin pause and hope — in contrast to their opponents during the primary elections and General elections trump refrained from sharp criticism of Putin. Trump called Putin a “strong leader” and refused to condemn him for military aggression and persecution of dissidents. Instead, he said he expects talks with Putin and expressed a desire to establish relations with Russia on a new, more favorable basis. More hope inspired criticism of three of Putin’s Scarecrow, that is, to NATO — trump called this organization as obsolete, and also required that its members have ceased to live for others. Trump refused to rule out lifting sanctions, but instead said vaguely: “We’re still investigating”. In their rhetoric during an election campaign trump drew a picture — Russia and America are in a state of harmony in order to defeat a common Islamic extremist enemy.

What could happen then in Putin’s head? Did he think that the American electorate is going to give him clown-lover, who would give him exactly what he wants — Ukraine forever in Russia’s sphere of influence, helpless NATO, the recognition of Crimea, as well as a prominent role in the middle East, while America will deal with its internal Affairs? If so, Putin could conclude that he needs to stay out of the way and give Trump a chance. Remuneration in the case of election trump in this situation would be too significant to pass up.

The steps that Putin has taken in the course of the year, with what he was waiting for that moment when the sky will fall associated with the coming to power of trump’s unexpected gifts, but he considered this option unlikely. Of course, Clinton had to win, as predicted by opinion polls.

Putin went on a very big risk and lowered the tone of the narrative of the country “surrounded by enemies” on which rests his entire regime. The Kremlin mass-media began to publish favorable articles about trump and his heroic campaign — a David versus Goliath campaign against the malicious establishment. Actually, the Russian people and its Parliament was jubilant after learning about the victory of trump. Public opinion polls showed that Russians have been sympathetic to perceive America trump.

However, a month later after the arrival of the trump to power, Putin must realize that the tramp, which he expected would never come — how in the play “waiting for Godot”. If Donald trump is an agent of Putin or slightly less reprehensible — a pawn in the hands of Russia, the Russian intelligence agents did a very bad job. They helped to elect a President who has announced a major increase in defense spending, discovered hydrocarbon reserves of America and appointed hawkish team that will deal with foreign policy. As noted by Walter Mead (Walter Russell Mead), “trump, in other words, is a nightmare for Putin as well as a significantly greater threat to the goals of Putin than they were or wanted to be President Obama.” If Putin’s agents had regular contact with the team at trump (as claimed by some media), Putin needs to fire them because of their incompetence. Their pawn became a monster.

Now Putin understands that trump will not make significant concessions, and so the Russian President went on to more action. He can’t afford to have a society that has to feel good about America; and therefore he ordered his media to cease to present a positive view of trump. “Disappointment of the century” in the face of trump a concern about Putin’s own election in 2018. It needs to exclude the possibility of participation in them the Russian version of trump. To give some legitimacy to his re-election, Putin had planned to include in the ballot Alexei Navalny. Putin came from the fact that Navalny has no chance, but after trump, he can not be so sure. To enhance its role as a stimulus for Ukraine, Putin announced that Russia recognize the passports of the two self-proclaimed people’s republics in the Donbas. Thus, Putin more or less announced the end of the peace deal, the Minsk II, which, he said, he supported. Now Ukraine can complain to Europe that Putin, not Ukrainians, are an obstacle to peace.

On the international front, as the congressional hearings, the Putin regime has openly violated 1987 Treaty on medium-range missiles. The Treaty forbids any cruise land-based missiles with a range of 500 kilometers to 5,500 kilometers. The newly deployed Russian missiles threatened American targets in Europe, as well as the facilities of NATO. Moscow would never do such a step, if it had intended to conduct serious negotiations with the administration of the tramp — and this is another sign that Putin no longer hopes for trump.

A significant increase in defense spending, which trump declared in his address to both houses of Congress, represents the biggest headache that Putin received on his alleged “agent”. Putin has already for over two years promises to bring the economy out of crisis. Statistics even used sleight of hand to portray the recovery in industrial production in mid-2015. With the help of this trick Putin wants to tell the West and its own people that the Russian economy returned to the path of development.

I doubt that Russian people would be impressed with this version of “false news”. The government tells them that the situation is improving, but their own life paints a different picture. Real incomes and personal consumption continue to stagnate. In construction, there are no signs of recovery, and pensions lag behind the inflation rate. Government spending on health and education continue to decline, while mortality increases and human capital is lost. Refrigerators sent the Russian people a completely different message than the government statisticians.

And the situation does not improve. The consensus forecast to 2023 suggests that growth will be significantly less than 2%. The pace of the Russian economy is unlikely to recover its pre-Crimea level of production to the moment 71-year-old Putin will complete his fourth term. And so it will be only in the case if Putin does not plunge Russia into another foreign adventure that could damage the economy.

According to experts, the re-election trump in 2020 will depend on the economy. Will it change in the tax sphere, in healthcare, in politics for reducing the regulatory functions to the American recovery and output growth 3%? The re-election of Vladimir Putin in 2018 will depend on the state of the Russian economy which is in recession since mid-2014. Putin does not have serious opponents (Navalny will not be able to participate, and Boris Nemtsov, conveniently dead); participants in anti-Putin demonstrations, faces severe punishment, and the Kremlin, the media drumbeat will spread Pro-Putin message.

Putin has used repression in order not to sacrifice growth and welfare in exchange for votes. In 2018, his opponents will have no chance of stale old leader of Communist party Gennady Zyuganov, as well as corrupt and clown Vladimir Zhirinovsky. With such opponents to even the odds Putin look good.

Russian economic statistics indicate that Putin is nearing the limit to which he can bring to the Russian people. He brought to the limit of the choice of “guns instead of butter”, and as a result the living standard of people is reduced within three years. The Russian people have a limit of patience that was demonstrated during demonstrations and protests in the areas and regions of the country, including with calls for greater independence from Moscow.

Putin is testing the limits of the capacity of Russian weapons, but this time American President Donald trump offers to rebuild America’s military strength. In this competition, Putin and Russia will lag.

When trump and Putin, we return to the era of Reagan-Gorbachev, but under less favorable conditions for the Russian side. The USSR’s population has surpassed the United States, and its GDP was about half of the American. Could Putin, in fact, compete with a country that in two and a half times bigger than Russia by population and 14 times the GDP? If he is still more to sacrifice living standards of its people, their health and education? I doubt it.

The first meeting of Putin and trump will probably tell us more about what Putin is going to do with the impending serious problem.