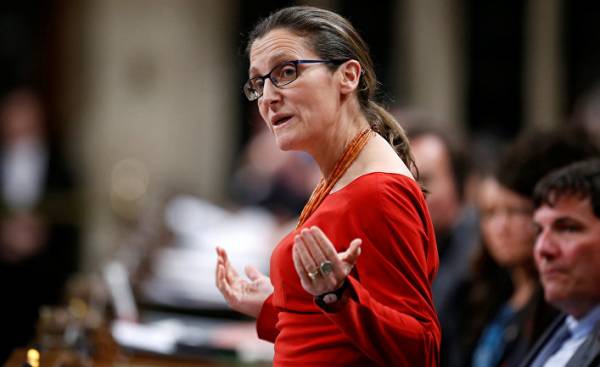 27 Feb on the website Consortiumnews.com there was an article which exposed the lies of the new Minister of foreign Affairs of Canada Christi Freeland (Chrystia Freeland) about her Ukrainian maternal grandfather, whom she described as a hero who fought “for the return of freedom and democracy in Ukraine”, forgetting to mention that he actually was a Nazi propagandist, whose newspaper was justified the extermination of the Jews.

During the following weeks, the article entitled “a Nazi skeleton in the family closet” (A Nazi Skeleton in the Family Closet), written by journalist Anna Tsukanova (I personally edited this article and checked the reliability of the information contained therein), so widely spread, that the canadian media turned to Freeland for clarification. And, as often happens today, Freeland decided that she should not reveal the truth, saying that the article above is part of a propaganda and disinformation campaign of Russia.

Freeland told reporters: “I don’t think it’s a secret. American officials have said publicly — and even [German Chancellor] Angela Merkel has stated publicly that Russia attempts to destabilize Western democracy, so I guess it should be no surprise that such efforts are undertaken in relation to Canada… I think Canadians and other Western countries should prepare for the fact that such steps will be taken against them”.

Although Freeland did not comment on the reliability of the information given in the article, its representatives stated that her grandfather was not an accomplice of the Nazis.

Other representatives of the government of Prime Minister Justin Trudeau (Justin Trudeau) has joined the counterattack. Mentioning about the danger of a Russian disinformation campaign, public security Minister Ralph Goodal (Ralph Goodale) said: “Obviously, we were in a situation where we need to be alert”.

In his article published on March 6, the canadian publication the Globe and Mail also came to the defense of Freeland, noting that the foreign Minister “has become a target for baseless accusations of Pro-Moscow sites that her Ukrainian maternal grandfather was a Nazi collaborator”.

This publication has contacted a number of experts, who also rejected the information in the article, published on the website Consortiumnews.com and other sites are either made her repost, or referred to it in their own materials.

“Here we see the obvious Russian handwriting. Fake news, disinformation and attack on specific people, — said Paul Grod (Paul Grod), President of the Ukrainian canadian Congress. — I feel uneasy when I hear such accusations, no matter they are directed against the Minister Freeland or someone else.”

Publication Globe and Mail also quoted the statements of the Ukrainian Ambassador to Canada, Andriy Shevchenko, who called our supposedly “fake” news “another reason in order to ensure that Russia is waging war against the free world. And not only in Ukraine.”

Then the Ambassador gave some advice about how to deal with Russia and its misinformation: “I am absolutely sure that they will look for new victims in the free world, so I urge our canadian friends to prepare for this and stay strong. We will be happy to share with them our experience in how to behave in such information wars”.

The second article in the Globe and Mail

The only problem with all these righteous objection is that the story of the ancestor of the Freeland — is truth, and Freeland knows about it.

In my next article on this subject edition of the Globe and Mail was forced to admit that “Freeland more than 20 years, knew that her Ukrainian maternal grandfather was the chief editor of a Nazi newspaper in occupied Poland, which were the curse of Jews during the Second world war.”

In other words, it was not only in the fact that our article contained accurate information, but that Freeland began deliberately misleading attack against us and to punish us for publishing the truth.

Our article was not just true, but worthy of attention, given the strong campaign Freeland for the support of Ukrainian nationalism and deep hatred towards Russia. Canadians have a right to know what underlies those feelings experienced by their foreign Minister. In this case, it could be that it inherited the world view of his grandfather, who sided with Adolf Hitler and then fled to the West when the Soviet Red army defeated the Nazis.

However, rather than own up and admit these facts, Freeland has decided to pretend and to slander journalists who were doing their job. And the flood of slander has not yet dried up.

Although the publication Globe and Mail acknowledged the accuracy of the information in the article about the ancestor of Freeland, it continued to belittle and defame journalists who have taken the liberty to disclose this information. In the second article in the Globe and Mail stated: “the family History of Freeland became a target for the Russian, seeking to discredit one of the most senior defenders of Ukraine in Canada.”

Insults and attempts to discredit anyone who does not accept on faith “truths” of a new cold war, have become a familiar phenomenon in the West. Just as the largest media in one voice asserted memorized lies about the campaigns in Iraq and on weapons of mass destruction, they continue to foment hysteria about the alleged “Russian propaganda” and “fake news”.

The story, which is never

In his second article on the subject, the publication Globe and Mail noted that “Ms. Freeland, who gave a tribute to his ancestors on the maternal side in various articles and books, in 1996, helped to edit a scholarly article in the Journal of Ukrainian studies (Journal of Ukrainian Studies), which stated that her grandfather, Michael Hamster, was a Nazi propagandist in the newspaper “Krakow news”.

“This newspaper [“Krakow news”] was established in 1940 by the German army, and was in charge of it an officer of the German intelligence Gassert Emil (Emil Gassert). Printing presses and room for revision, the Germans took away from the publisher-Jew who was later killed in the Belzec concentration camp”. All this was already written in the article, published on 27 February.

Article for the Journal of Ukrainian studies, wrote uncle Freeland, John-Paul Himka (John-Paul Himka), Professor Emeritus, University of Alberta, who in the introduction thanked Freeland for her assistance. However, as noted by the publication Globe and Mail, “Ms. Freeland has never admitted that her grandfather was a Nazi accomplice, and on Monday she announced that those accusations are part of a disinformation campaign of Russia”.

Some members of the family Freeland tried to present the story in a different light, depicting a Hamster as a double agent, however, as reported by the Globe and Mail, Himka stressed that he has failed to prove the accuracy of this information, which he called “fragmentary and one-sided”.

Himka said he learned that the Hamster was working on the Nazis only after the death of his father, in personal papers which were found copies of the newspaper “Kharkov news”.

The day after the first review of Freeland, its representatives made a short statement: “Many years ago, the Minister supported the attempts of his uncle to study and publish this hardest Chapter in the life of her late grandfather”.

But Freeland, who in the past worked as a journalist, did not explain why she first decided to hide the information about your ancestor and criticized the journalists who told the truth.