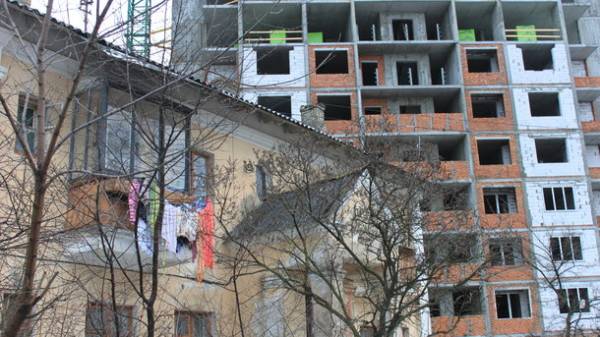 In Ukraine every third multi – storey building – “Khrushchev”. The life of such houses has expired. The expert of the Institute of social and economic research, Vsevolod Nikolaev says: – overhaul of the residential sector one for a long time did not think. If nothing is done, the expert believes, after ten years, the owners of apartments in “Khrushchev” will be without a roof over your head.

“Khrushchev” built in 1957-85 years as temporary housing after 25 years the house had planned to carry, and instead to build a more “durable” properties. Such high-rise buildings in the Soviet Union was considered “social housing”, they were giving them away. The houses themselves were built in the style of functionalism (of the box without architectural frills).

Gradually, the lifetime Khrushchev was extended to 60 years. Thus, buildings that were in the first phase of construction, it’s time to demolish the already in 2017. And if the house was never repaired, he had to go for demolition ten years ago.
All architects have developed six series of “Khrushchev”. They are all with low ceilings (of 2.55-2.6 meters) and with poor thermal and sound insulation. In addition, there are numerous modifications developed by different design institutes.

One of the first in Ukraine built “Khrushchev” series K-7. This is a prefabricated house with a relatively large kitchens, separate bathroom and bedrooms. As in other “Khrushchev”, in the houses of poor noise and heat insulation. Such flats time to endure.
From 1956 to 1968 built “Khrushchev” series 1-335. This is one of the most unfortunate series of panel houses. These houses were built without lifts and refuse chutes, with clearance room and a combined toilet and bathroom. The term of operation will expire in 2016-2018. 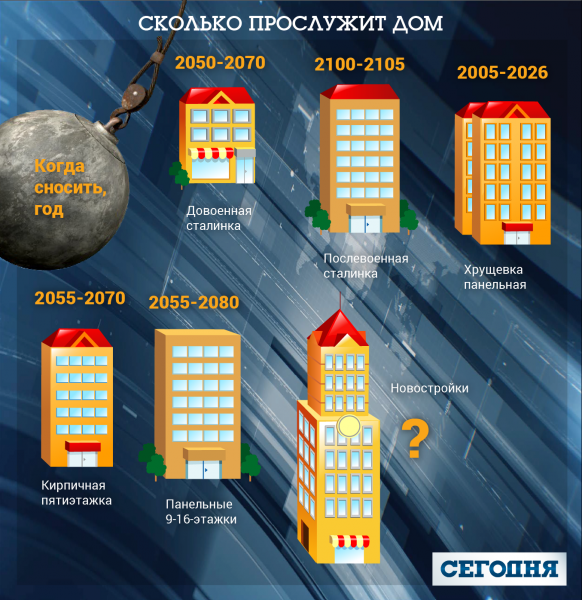 Itself common in the Soviet Union series 1-447. The life of such houses a bit more – ten years, experts believe they can stand. High-rise buildings were built of brick, a bathroom and the largest room in the apartment – walk-through.
“About 80% of the buildings built before the 80-year. Periodically it was necessary to carry out the repair of communications, roofs, elevators and so on. But in Ukraine such repairs had taken place. We must now compensate for the old unfinished. After the war the entire Soviet Union was built on the destroyed territories, all forces were sent to two decades to rebuild the country. Nobody said anything about repairs. And now we are in a situation when everything is built has been able to overdue repairs,” says Vsevolod Nikolaev.

Almost every third high-rise building in Ukraine – one of a series of “Khrushchev”. But there are other building – pre-war and post-war “Stalinka”, high-rises, built in the late period of the USSR and new buildings. According to the expert, “Stalinka” is designed for 125-150 years, these homes can serve up to 2050-2100 years.

If with “Stalin” and “Khrushchev” you can predict the life, with new buildings all the more difficult. Developers do not advertise the technical documentation and very often saving on building materials. There are cases, says Vsevolod Nikolaev, the house is uninhabitable right after commissioning.
“When you buy an apartment in a new house, you don’t know what this house is made. Early was typical projects, which indicated what material and what quality used. Based on this, it was said, how long will last the house. Now it’s all proprietary information of the developer. Of course, in the pursuit of profit, the developer buys the cheapest materials – you get the lowest quality. The operating life of such houses is much lower”, – says the expert of the Institute of social and economic research.