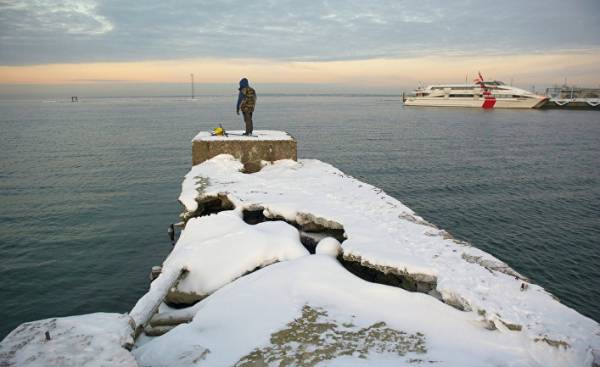 Since Donald trump has entered on a post of the President, has smoothed out many of the concerns that were previously on the policy of the new us administration on NATO. With special relief to the Baltic States. But Estonia and Latvia can do more to strengthen stability in the region is to solve the problem with the so-called non-citizens, says lawyer Maria Hellborg (Maria Hellborg).

Changes in laws on citizenship will reduce the influence of Russia.

During his election campaign, Donald trump very critically spoke about the defense of the NATO Alliance, which he called, in particular, outdated and irrelevant. Since then, the President trump, however, changed the tone to such an extent that after a meeting with NATO Secretary General Jens Stoltenberg has called NATO the bulwark of peace and security. The Baltic States are worried at the increasing military activity in the Baltic sea area and consider the United States and NATO as the main guarantee of the inviolability of its sovereignty.

The concern of the Baltic States has political, demographic, and historical background. Since the end of world war II until the collapse of the Soviet Union the Baltic States were under Soviet occupation. Because of this occupation is now slightly more than a quarter of the population of Latvia and Estonia is ethnically Russian.

Some of this group are the so-called aliens, that is, Soviet citizens who moved to the Baltic States during the occupation, in part because of deliberate “Russification” of these countries by the Kremlin. After the collapse of the Soviet Union, these people were not Latvian or Estonian citizens automatically, since the two countries restored the nationality laws that existed in the interwar period of independence.

Non-citizens have the opportunity to go through the process of naturalisation and thereby become Estonian or Latvian citizens. This process involves, however, certain tests of knowledge such as history, social system and language. Language test, especially for the older generation perceived as a big obstacle to naturalisation, as many of them never learned the local language while Russian was there in the status of lingua Franca. And yet many citizens believe that they cannot be compelled to undergo this process, because they were born or have lived most of my life in Latvia and Estonia and thus consider these countries as their homeland.

The issue of non-citizens relevant since the collapse of the USSR. The position of the Baltic countries was the subject of international criticism, for example, within the EU, the Council of Europe and the UN. Russia is the most active critic of how Estonia and Latvia treats its non-citizens. Moscow considers that the restriction or lack of political rights of this group means the infringement of human rights (even if the social rights they have).

The situation can be used by the Kremlin to legitimize and strengthen their influence in the region through its effects on the countries where they live these groups. That’s why the solution to the problem of non-citizens could be an important factor in strengthening regional security. Russia uses double rhetoric, on the one hand criticize Estonia and Latvia for the policies that they lead, and with another — encouraging non-citizens remain non-citizens, for example, allowing them to travel to Russia without visas. This privilege is being canceled after naturalization, many can seem attractive, especially for those who are on the other side of the border remained friends and relatives.

In recent years, many non-citizens have decided to become citizens of Russia instead of Estonia or Latvia. This gives another reason for concern in these countries with the Russian doctrine of “protection of its citizens abroad”, which was used, for example, as an argument for the invasion of Georgia and Ukraine.

For Estonia and Latvia, the best solution seems to be changing the laws on citizenship, so they had spread to the group of non-citizens, then the main source of problems will disappear. Political situation in Estonia and Latvia, however, makes unlikely the possibility that non-citizens will thus receive full political rights. Indeed, many Estonians and Latvians believe non-citizens threaten internal political stability and have doubts that these people will be loyal to their own state.

In addition, such a decision would be regarded as a symbolic recognition of the Soviet occupation, which further would reduce the chances of a political solution to the problem.

Some steps to liberalize the naturalization process aimed to ensure that non-citizens had become citizens, had been taken in Estonia and Latvia. Despite liberalization, the annual naturalization, however, is relatively low. This can be interpreted as a sign that non-citizens are satisfied with their situation, and the country has made the lives of this population are so comfortable that he had no great need for citizenship.

If so, then the question of non-citizens will remain relevant for a long time, even if to contribute to this cause is the international community. With the accession of Estonia and Latvia into the EU and NATO, both organizations demanded that facilitate the naturalization process, as well as providing non-citizens more rights.

In addition, the international legal system also played a role here in his quest to create a system for the protection of human rights, regardless of whether the person has citizenship or not. But this development potentially has a reverse side: motivation be relatively troublesome process of naturalization and become a full citizen will be reduced. Thus it could be argued that this system has failed in its quest to improve the living conditions of people who have no citizenship. Instead, we created a situation where non-citizens can live in their home countries, using adequate social rights and having the ability to freely cross borders both the EU and Russia. Nevertheless, reliable support full citizenship they have.

Large groups of non-citizens and Russian speakers — this is mostly the legacy of the Baltic States from Soviet occupation. The question is, to put it mildly, complex and affects both domestic and foreign policy of countries.

The concern of the Baltic States about the growing Russian aggression is largely rooted in their history, so it is important to understand that these countries that have been independent a little more than 25 years, have a need to restore their national identity. At the same time we cannot close our eyes to the fact that this issue may have implications for regional stability if left unresolved.

Even if President trump and changed their attitude to NATO and now believes that the organization plays an important role in the protection of the Baltic States, Estonia and Latvia, however, there is still an opportunity to prevent a potential security threat, changing its policy on citizenship and thereby denying Russia to continue the criticism and influence. NATO will continue to play an important role in the Baltic States, but also the task of each country is also included to create the best possible conditions for stability and lasting peace, instead of blindly rely on the defense Alliance, regardless of, trump or someone else sits in the White house.