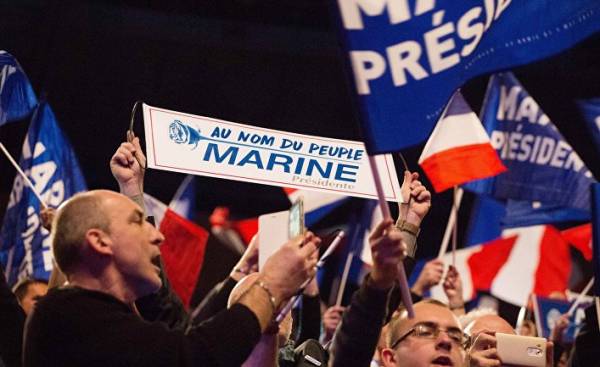 The stupor. It feels any normal voter is at present a presidential campaign.

Collecting 5 Mar unexpectedly large crowd, Francois Fillon has demonstrated a force that returns him to the confidence of supporters and justifies the decision to remain a candidate. Although he managed to form the image of a man who became a victim of the system was loyal to the party, but retained the support of the right of the electorate, the care of a number of important persons, members and close associates, certainly weakened it. The sword of Damocles is already hanging right over his head, but his future is unclouded, too.

What was supposed to be for the right a cakewalk, turned into filled with torture the way with cross on back. But although the moral discrediting of Fillon prevent him to gather around him his political family, not to mention that the population is growing suspicious about the idea of perseverance of the authorities and the political conspiracy theory is becoming more compelling. In addition, the flight of the deputies from the camp Fillon is perceived as an attempt to save the chair position, and not an act of courage and decency amid charges.

Part of right-wing voters actually fear that they may deprive clearly made in the primaries in favour of the candidate of the traditional right. In their opinion, Alain Juppe too close to the Emmanuel Macron, in order to meet these expectations. In the polls all this has led to the displacement of part of the electorate in the direction of marine Le Pen in a scenario of withdrawal of the candidacy visit. Another strong side of the latter (she played a significant role in the primaries) is that he is the only candidate who looks into the face of the Islamist threat and speaks about totalitarianism, that is aware of the scale of the looming danger. It is no accident that his statement in the broadcast on France 2 ended with the subject of totalitarianism.

Anyway, the split in his camp, the decision of Sarkozy to distance himself dry call to order Juppe and shame “Penelopiad” (the French are tired of hearing calls for the victims of politicians who give themselves privileges) make it unclear, and we are not immune from new attacks.

As for the Emmanuel Macron, there is also quite shaky. His movement is new and does not represent the Alliance handing over the positions of the parties, but it still showed nothing in the election. We first see how presidential elections play such a role test for the nascent movement, and it is not excluded dizzy with success, if his entourage will take it as support of his person, the fact that courage is now paying off. The old system dies. This creates great opportunities for the brave, but can not become the basis for the way of France or of the public project. The rate of Emmanuel Macron is of interest, but it is not yet possible to say how much I will give this impulse in terms of the parliamentary majority. The game has never been so open.

So far, two candidates from the left, Benoit Hamon and Jean-Luc Mélenchon, can not form the dynamics and do not participate in the brawl. In their defense we can say that the current campaign still was not, although we only have six weeks before the election. And most important…

With all this, it is impossible not to admit that the last two years has left trauma in the memory of the French people. What we are experiencing political, social, economic and spiritual crisis. And that trusting politicians, the press and institutions has never been so low. “How can you say that we have to rely on them.” These words of one girl, who looked at the list of presidential candidates, is etched in my memory. If someone believes such an attitude is unjust, let him say it. In may we will have a new owner of the Elysee Palace, but if we get the President of the Republic?

We are witnessing an unprecedented, end of the system. Old recipes pre-election kitchen no longer work. Because winning elections isn’t everything you need it to put something beginning. So, if one of the candidates decides that he has something to say, or will want to prove themselves and finally start talking to the citizens, not to read the old political sermon, which never gather crowds, if he accepts the reality and not to pretend that participates in normal elections, in the midst of a crisis of the system, we must somewhat weaken the feeling that we are sitting in the circus, where the actors have turned their backs on us. Now, when we have to deal with Islamist terrorism in their own country, and marine Le Pen coming to power, the French need more than ever to the feeling of confidence and security, but politicians have never seemed so detached from reality and attached to an unrealistic perception of society, state agencies, tensions among the population…

Today’s election turns into a farce: slamming doors, fall decorations, one of the main actors loses the thread, and nobody knows around what the political course will meet the French. What we can do is to wonder what writer could imagine such a mess with endless aggravations. We’re just in a stupor from the events, but the candidates seem to want to play continued. If we see the crisis of democracy, they are just trying to play the whole match 2012. The impression that their little world, nothing has changed, while our world will never be the same after the terrorist attacks at Charlie.